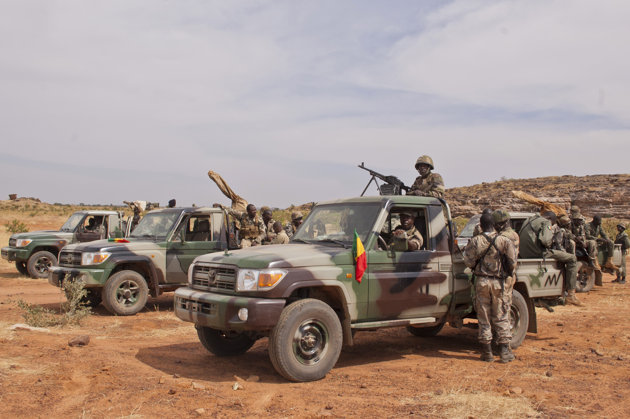 DAKAR, Senegal — Just as Al Qaeda once sought refuge in the mountains of Tora Bora, the Islamist militants now on the run in Mali are hiding out in their own forbidding landscape, a rugged, rocky expanse in northeastern Mali that has become a symbol of the continued challenges facing the international effort to stabilize the Sahara.

Expelling the Islamist militants from Timbuktu and other northern Malian towns, as the French did swiftly last month, may have been the easy part of retaking Mali, say military officials, analysts and local fighters. Attention is now being focused on one of Africa’s harshest and least-known mountain ranges, the Adrar des Ifoghas.

The French military has carried out about 20 airstrikes in recent days in those mountains, including attacks on training camps and arms depots, officials said. On Thursday, a column of soldiers from Chad, versed in desert warfare, left Kidal, a diminutive, sand-blown regional capital, to penetrate deep into the Adrar, said a spokesman for the Tuareg fighters who accompanied them.

“These mountains are extremely difficult for foreign armies,” said the spokesman, Backay Ag Hamed Ahmed, of the National Movement for the Liberation of Azawad, in a telephone interview from Kidal. “The Chadians, they don’t know the routes through them.”

These areas of grottoes and rocky hills, long a retreat for Tuareg nomads from the region and more recently for extremists from Al Qaeda in the Islamic Maghreb, will be the scene of the critical next phase in the conflict. It will be the place where the Islamist militants are finally defeated or where they slip away to fight again, military analysts say.

French special forces are very likely already operating in the Adrar des Ifoghas, performing reconnaissance and perhaps preparing rescue operations for French hostages believed to be held in the area, said Gen. Jean-Claude Allard, a senior researcher at the Institute for International and Strategic Relations in Paris. But African forces are likely to be assigned the brunt of the combat operations, going “from well to well, from village to village,” General Allard said.

The few Westerners who have traveled in this inaccessible region bordering Algeria say it differs from Afghanistan in that the mountains are relatively modest in size. But its harsh conditions make it a vast natural fortress, with innumerable hide-outs.

“The terrain is vast and complicated,” said Col. Michel Goya of the French Military Academy’s Strategic Research Institute. “It will require troops to seal off the zone, and then troops for raids. This will take time.”

The number of militants who remain is in dispute, with estimates varying from a few hundred fighters to a few thousand. They are becoming more dispersed and are hiding themselves ever more effectively, Western military officials say.

The French military has been flying fewer sorties over the region in recent days, “from which I deduce a lack of targets,” said a Western military attaché in Bamako, Mali’s capital, who was not authorized to speak on the record. “They are just not finding the same targets. Clearly they are hiding better and dispersing more widely.”

A ranking Malian officer stationed in the northern town of Gao said: “We don’t know how many there are. They have learned to hide where the French can’t find them.”

The militants are versed in survival tactics in the hills, supplying themselves from the nomads who pass through and getting water from the numerous wells and ponds, said Pierre Boilley, an expert on the region from the Sorbonne. Still, the sources of water are an opportunity for the French and Chadian forces, as they can be monitored without too much difficulty, experts said.

“It’s a sort of observation tower on the whole of the Sahara,” General Allard said. The fighters have had years to build installations, modify caves, and stock food, weapons and fuel, he said, and the precise locations of their refuges remain a mystery.

Even if the bulk of the militants have retreated into the mountains, pockets remain around the liberated towns of Timbuktu and Gao, said a French military spokesman, Col. Thierry Burkhard. Last week, French forces patrolling the area around Gao engaged in firefights with militants, some of whom fired rockets, officials said.