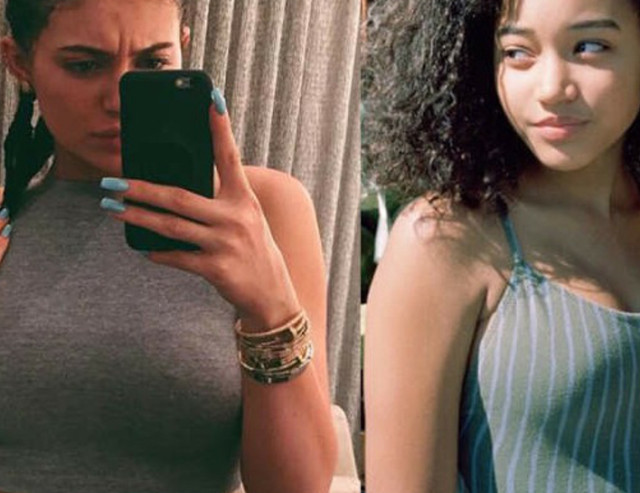 Why don’t more Black stars speak out about race and racism in refreshing ways?

I’m not sure whether the mainstream media is silencing Black celebrities–refusing to allow their outlets to be platforms to speak about the number of acts of white terrorism against Black people that have occurred in the past year–or whether Black celebrities are silencing themselves–afraid to get involved in struggles that might sever the relationship with the hands that feed them.

In any case, despite their quiet elders, young Black youth are speaking out on topics of race, in a way that is promising that young generations will not keep their mouths shut and endure the inhumane racial dynamics that have plagued America.

Amandla Stenberg, of Hunger Games fame, is one young Black star who has recently voiced her thoughts on the issue of race.

She took to social media when Kylie Jenner, teenage sister of Kim Kardashian, posted a photo on Instagram wearing cornrows with the caption: “I woke up like disss.”

With the cornrows and the accompanying sentence – “I woke up like disss” – Kylie obviously attempts to present herself, presumably speaking and wearing her hair, like a Black person.

Amandla, a 16-year-old teenager herself, added a comment below Jenner’s photo, which read.

Amandla’s critique is not that Kylie shouldn’t wear cornrows, but that if she wants to look to Black culture and even love it for that matter, she should also look to the conditions of the people who produce that culture, and love them too, not simply step over their existence to snatch their culture and then walk away from the scene.

Like Jenner with cornrows and text, white performer Iggy Azalea has also tried to mimic Black culture through imitating rap music. Amandla points out that white women (and men) adopt Black culture, dress, and lifestyle, while also conveniently remaining silent about white oppression of African Americans. Clearly, with Kylie Jenner’s cornrows and speech, she is attempting to mimic Blackness. And so why doesn’t she also mimic other parts of being Black in America that are not cultural, like advocating for Black struggles?

A YouTube video Amandla made explains the notion of cornrows and cultural appropriation in more detail.

Amandla urges whites who claim to love Blacks like the Jenner/Kardashians (Kylie’s one sister Kim Kardashian is involved with rapper Kanye West, while another Chloe Kardashian was formerly married to basketball player Lamar Odom) to call attention to issues of institutionalized racism rather than just taking what looks cool from Black popular culture.

They should use their position of economic power and visibility to do more than just appropriate trends. Why not communicate messages that are important to Black communities, like tweet about why Black Lives Matter, to the 1.2 million followers who take time out of their day to like an unremarkable photo?

For example, many white audiences associate rap music with negativity and a defunct Black culture. They believe that cornrows on Black men and women are unprofessional, ghetto, unkempt, thuggish, or ratchet. If a Black person is performing poorly at school, the white solution is they should stop listening to all of that rap music. Some organizations, like the U.S. military, even outlaw Black hairstyles.

Yet, these same white observers will speak positively about cornrows on white women. Hence, Amandla’s upending of the hashtag #whitegirlsdoitbetter.

Amandla’s testimony allows young people to confront the cultural appropriation of Black trends for white audiences. There is no reason why more people cannot be vocal about these contradictions and speak out against Black oppression.

The multiple voices of Black people, old and young, are ever important in telling stories about race and racism in today’s society.

Naturally Jenner’s retort, equally as ignorant as her initial statement, was immature: “Mad if I don’t, Mad if I do…Go hang w Jaden or something.”

Given that response, I doubt Kylie Jenner understands what cultural appropriation means, nor does she possess the desire to learn, which likely wasn’t Amandla’s intention.

But if any of those million followers who stumbled upon Amandla’s comment learned something or if her words encouraged other Black stars to speak up against racism, her words certainly did not go unnoticed.