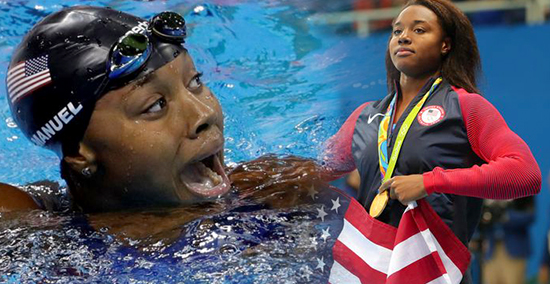 MILWAUKEE, Wisconsin, USA — While the Rio Olympics take place in Rio de Janeiro, Brazil, thousands of miles away US police in Milwaukee, Wisconsin gunned down yet another young African American man. The two worlds African Americans experience — the one in Brazil where they are heralded as heroes and sensations and the one in the US where they are pegged as villains and criminals — are literally and figuratively worlds apart.

Swimmer Simone Manuel tried to bridge these two worlds giving an interview after she accepted a gold medal, the first for any African American woman in swimming. When asked about her victory in the 100-meter freestyle, she said: “It means a lot, especially with what is going on in the world today, some of the issues of police brutality… This win hopefully brings hope and change to some of the issues that are going on.”

The comment made waves in US conservative circles where opponents ranted: How dare she bring up police brutality? How dare she embarrass the US nation on a global stage?

The irony of their anger is lost only upon them. Throughout the Rio Olympics, the US media has incessantly ridiculed other nations for their shortcomings, local tensions, and sometimes profound tragedies. US media discussion of other countries during the opening ceremonies was a conglomeration of terrorism abroad, war-torn nations, and refugees who do not have a home.

The only celebratory remarks came when the media commentators discussed their own shores, describing an exceptional nation that has a melting pot of success stories and is a model for other countries to follow. Only that’s far from the truth.

There is much domestic terrorism, local tension between racial groups, and tragedies of fatal shootings of African Americans that occur in the US. Simone’s timely comment during her interview dismantles the fiction of a harmonious US and brings attention to such problems. While the country might want to paint a rosy picture of itself before the world, its closet needs to be cleaned out. Racism is part of the filth that needs to be discarded.

Along with racism, the pervasiveness of whiteness is suffocating. The US media coverage of the Olympics is evidence of this smothering.

During the first week, the US media only raved about white swimmer Michael Phelps, who has been suspected of doping and even admitted that “I can honestly say in my whole career I don’t know if I have ever competed in a clean sport.” (Of course, this issue conveniently that never came up during the media coverage). At times, the cameras under their white gaze would rather focus on white Canadians or Germans rather than African Americans–you know, the US citizens.

After a week of almost complete and utter whiteness with swimming, track and field started, but the narratives of whiteness persisted. The US media cameras followed white athletes persistently and those who were half-white got the next best treatment.

The women’s 400-meter hurdle coverage focused exclusively on a mixed race girl, a rising high school senior whose mother was white and father was black. Indeed she was only the third best US runner in the event and didn’t even make the finals. Virtually left out of this coverage were two African American women: Ashley Spencer and Delilah Muhammad. The US media didn’t bother to show either woman’s semi-final heat in its entirety, only a fraction of the end, although they each won and advanced to the finals. Muhammad even had the fastest time overall of all the qualifiers and is a favorite to win the race.

African Americans are usually the subject of US media coverage if producers can weave together a story about tragedy or deviance. Silver medalist in the men’s 100-meters, Justin Gatlin was featured having served two doping convictions—the first, because of a banned substance in his ADHD medicine and the second, he alleged, because a masseuse vindictively used a steroid cream during his treatment.

African narratives in US media are just as paternalistic. When American cameras visited David Rudisha, the men’s 800-meter world record holder and gold medal winner from Kenya, their story focused on Rudisha forming a Kenyan Olympics in his community. His aim? To stop the tradition of killing a lion as a rite of passage for manhood. The underlying message here was that Kenyans are barbaric and this man, Rudisha, who has seen the world through his travels as an athlete, can help reform his village; in adopting the ways of foreigners, they will become a better community.

The media also used the Olympics to prop up American race relations beyond the grim day-to-day realities. The story surrounding sprinter Allyson Felix was framed in favor of espousing racial progress. Allyson spoke of her grandmother. The US media inserted images from the segregated pre-Civil Rights era. Allyson discussed her making it this far in the Rio Olympics. The US media implied the country had made it far through racial progress.

Back on US shores, the reception of African American athletes by white Americans on social media was full of criticism and scrutiny.

Gabby Douglas, who won the gymnastics all-around championship in the London 2012 Games and the team gymnastics championships in the Rio Olympics, was ridiculed by white Americans for her hair, her demeanor, and for not putting her hand over her heart during the playing of the national anthem. In comparison, during a previous Olympics, Michael Phelps burst out into laughter during the playing of the US national anthem but received no backlash from media or fans.

Underlying the scrutiny Gabby received was the envy and jealousy that a black woman, the first to accomplish the feat of an all-around victory on that scale, was back on the US team a second time. The necessity of her participation on the US team is a blow to whiteness and the ideology of white superiority. Not to mention, two black women, Gabby and Simone Biles—this year’s gymnastics all-around champion—was probably more than many whites in America could stomach.

As countless sports show, US prowess during the Rio Olympics and in general, from fighting world wars to performing popular culture, is deeply indebted to African American aid. Without African Americans, there would be no Industrial Revolution, no cash crops, no historic buildings with finely embedded Adrinkra symbols, and no extensive highways. The African American influence is profound in making the US what it is today. It is an indefatigable force driving the medal counts.

It is only fair that the contributions and value of African Americans is validated beyond the Rio Olympics. Simone Manuel’s comments brought this realization into its proper perspective. African Americans should not headline the US team only to face a burden of blackness in America when they arrive back home.