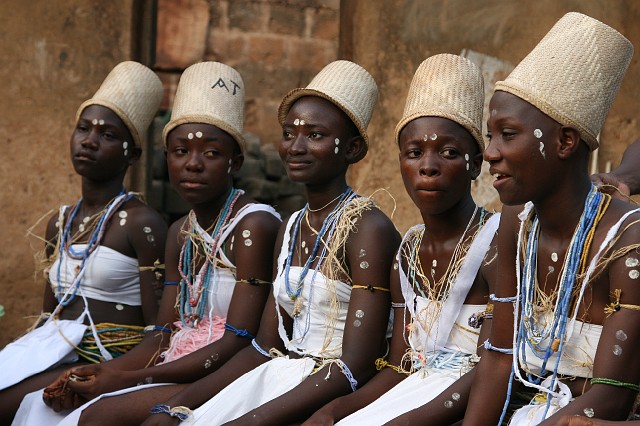 The Metha Trope: How I know More Than The Village.

Those of us who toil daily under the colonial regimes of West Africa have become aware of the Saviour Tropes of Europeans. From one NGO to the next, funded by African loot and exclusively founded and managed by the western elite, we have become aware of the European Mythology that anything that any European touches, including everything their women bear, must be considered blessed, better, more intelligent, and even more beautiful than anything we have known before in Africa.

And so western NGOs gallivant the vast terrains of the back-side of their American Empire, in Africa proper, tooting one Made In Japan, Gas Guzzling, Toyota Land Cruiser after another, and their European women come, and they proclaim with one orgasm from the next, how much better we (Africans) have become since the first Europeans came upon our lands. And they enforce these notions of the European Miracle with the most penetrating, excruciating efforts, even with vicious intellectual intent, within the walls and within the pages of their colonial missionary boarding schools.

The Saviour Trope of European college girls descending on African villages, like flies, pretty much, to teach African men how to lay bricks on top of one another, here and there—in much the same way that the ancestors of these girls claimed they knew better about gold than the Bono Peoples they met, who mined and smelted the metal—have now become the laughing stock in many villages, which are now amply aware of the patronizing geopolitical agenda of these “civilizing” scenarios that have been summarily engineered to wet the orgasmatron appetites of the western elites and their masses.

But something just as sinister, just as insidious and just as conniving as the European Saviour Trope and the social engineering that accompany them, has emerged in the last decade or two within the communities of the local colonial clerks who manage African affairs for their colonial masters. The Mis-Educated Than His Ancestors, the Metha, have now engineered a similar myth that at first glance may seem odd, but which when carefully examined, strikes as similar blow to perspectives about Africa as the Saviour Trope has done for more than a century.

Let’s call this the Metha Trope. It follows that the Metha who’s never lived a proper African life, that is, who’s had no skin in the game of African Tradition, who neither can be expected or held responsible for (not) following this tradition or that tradition, seems to have become the authority on how this or that African Culture works. In fact, when the Metha speaks of African culture, he speaks it so authoritatively as if he has lived it, yet he has not. At best, the Metha has lived at an arm’s length and a million miles away from the exact thing, yet he speaks as though he beats the Fontonfrom or has even poured a single libation.

The Metha is not a father, and he has never been a father, yet he knows how to be a better father than African fathers. The Metha has never been pregnant or even given birth to a child, but she wields a colonial missionary degree in childhood education from someplace in Liverpool and expects to be a better mother to strange children than the African mothers who birthed and raised them. The Metha has never been married legally or customarily, at least not for more than three straight months, yet the Metha is beaming with copious amounts of experience and wisdom for married people.

The Metha Trope is a crude copy of the European Saviour Trope. Everything that the Metha thinks, feels, hears, sees and touches can be considered blessed thenceforth. The Metha carries this trope on to serious matters of national interest—he carries over whatever he thinks works in Liverpool (although he’s never had to manage the affairs of Liverpool himself) to Koforidua and insists, often with brutish intent, that what works in Liverpool must work for Koforidua. The Metha transfers what the European Miracle has done to him to his homeland, insisting by virtue of his proximity to Blackness, and to Africanness that his Metha Trope too should be considered valid.

Yet, tropes are by definition invalid. At best they are mythologies that serve the emotional and material interests of those who propagate them. As the Metha genuflects before the “civilizing” Saviour Tropes of his colonial European masters, so too does he demand our genuflection before his orgasmatron appetites for his Metha Tropes. What the Metha preaches is not expertise, but his perceived exceptionalism and omniscience. Thus, when he descends on a self-sustaining village that has survived more than 1,000 years in Mali, without dildos and condoms, he is perplexed. It is not that he couldn’t learn from a civilization that is at least some 800 years older than his colonial masters’ newfound lives, no, not at all. It is that the Metha’s mis-education demands that he pretends he knows better than all the people of such villages put-together.

That’s the Metha Trope. And it is just as sinister, just as insidious and just as Pecksnifian as the Saviour Tropes of the Metha’s colonial masters of Europe. Yet still, these two tragedies of the colonial terrorist and his Saviour Trope and the Metha and his Metha Trope illustrates a way forward. They illustrate the way mainly by virtue of the disastrous consequences of confusing their highfalutin nonsense for wisdom. The recognition that these myths or tropes are not true wisdom has to take place in the minds and hearts of every West African citizen.