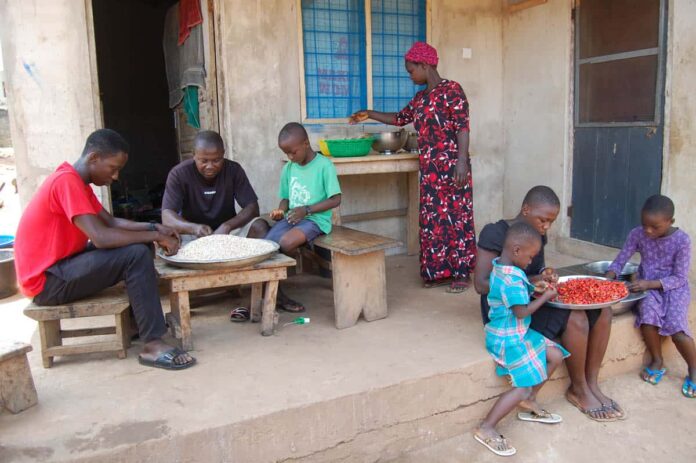 Religion vs Atoms: What Binds Us?

An “Atom” is an old African word, which technically translates as the smallest possible division anyone can make of any material. In other words, all materials are made up of their own unique atoms.

Still, many African Philosophers of antiquity admitted that “Atoms” are also by nature divisible. That is, there’s really no end to subdivision. An “Atom” hence, technically translates as the smallest possible representation of the material. By implication, any division beyond the atom denatures the “essence” of the material.

For instance, one may divide Oxygen into its Atoms. Oxygen atoms still largely maintain the characteristics of Oxygen. Any further subdivision of an oxygen atom is no longer unique to oxygen.

What binds subatomic particles? And how does this binding force(s) choose what subatomic particles to bind and how many to bind together. These questions are as relevant today as they were some five thousand years ago among African scholars. For instance, the scientist today would ask, “What binds the nucleus together?”

Religion. Love. Family. It is exactly because the material world around us is perfect and stable – i.e. mountains don’t turn into rivers and rivers do not metamorphose into cattle – that the ancient African scholars reasoned that the binding force ought to be regarded as a “positive” or “good” force. Religion. Love. Faith. A force that ensures Stability. Without stability everything falls apart. Without a force that ensures the stability of the atom (or of the nucleus), our material world comes apart.

It became inescapable—as is still the case—to beg the question: If we want stable societies and stable communities as the mountains and rivers, as the material world around us, how can we bind ourselves together, in such manner as the “Atom,” in order that we do not fall apart and come apart?

Religion/Family. The theory arises that it is only through a commitment to ourselves (in like manner as in the Atom) that we build stable societies, and produce grand civilizations of any stature. The self-sufficient, self-propagating nuclear family is the fundamental unit of any such society. The binding force is naturally through this nuclear bloodline (soul).

Individualism, on the other hand, is a uniquely and patently unstable position. Individualism cuts against the grain of the family union. It breeds chaos and it ruins the Obligatory Commitment to Ourselves—the ancient Kemet Scholars referred to this obligatory commitment to ourselves as “Atum” or “Atoum” or “Atom,” take your pick.

Atum is the idea/deity that completes/binds people together through the “ka” or “soul” or binding force. Religion/Family. The Family is where a child first learns how to submit to something greater — something more significant and more important than our perculiar wants. In this way the Nuclear Family is the First Religion. This is only just one instance in ancient Africa that we can appreciate the linkage between religious thought, sociology and hard scientific concepts. Family. Atoum. Atum. Atom. Take your pick — is the First Religion.

The Family poses the most significant retaining threat to the spread of Rugged Individualism (American Capitalism/Globalism). For this and plenty other reasons the operational word for removing this barrier to the spread of the Globalist Agenda of Rugged Individualism and confiscating all indigenous lands is Disembedment: That is the Dislocation of people from land/territory to kill culture and the first religion (Family).

Reply to Dade, from Narmer:

That makes sense: Submitting to the idea of the family (Atoum/Atom) is religion. This religion breeds continuity (of the soul and of the family unit). Continuity enhances a supreme connection with the LAND (we eat from this land and we bury our ancestors in this land). The LAND then is the Religious Book of Family. Without the LAND, one cannot exist as a civilization. This is obviously, the threat that the family poses to the Globalist Agenda. To disembed the people (individuals) from the LAND, one must destroy the essence of the family as a sacred unit.

This is one of the main reasons why the Capitalist Globalists have a condescending attitude towards our relationship to LAND in Africa. We say in Ntoaboma that the LAND is Mother, the River is Mother, the Forest is Mother, the Sea is Mother, and that these things, because they are Mothers, are in essence sacred.

These ideas inform how we manage the environment around us. These ideas are diametrically opposed to western/American Capitalism in which the only relationship of western people to land/river/sea and even to themselves is strictly Transactional and Exploitative. This is childish, destructive, deviant. All their economic principles promote this type of relationship to the environment. It is a fundamental lack of religion. Put another way , it is disreligion. More, it is, dare I say, devilish, as they seek their (sexual) happiness/deviance from dislocating indigenous peoples, whose principles oppose western paradigms of thought, from the LAND.