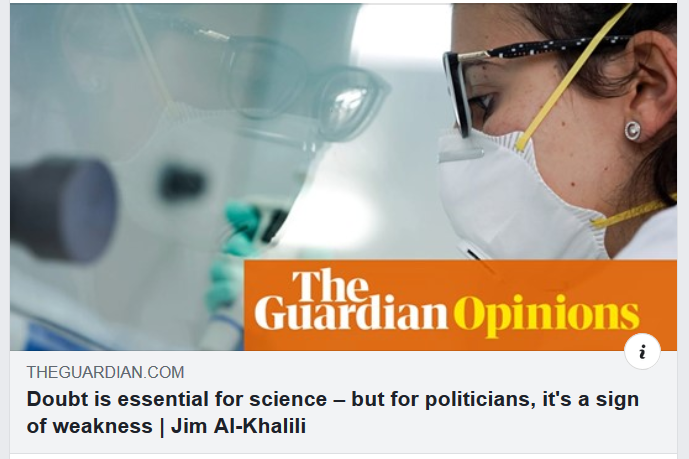 I think that some scientists are trying hard to save themselves, and the whole field of Science from the same blame that politicians face.

Politicians don’t double down when they are caught, unless they were a bunch of Donalds. Some scientists around today, however, are trying their very best to explain away their errors in a scientific way that simply does not make any sense whatsoever.

For example. One wrote: “It has never been more important to communicate the way science works. In politics, admitting a mistake is seen as a form of weakness. It’s quite the opposite in science, where making mistakes is a cornerstone of knowledge.” ~ Jim Al-Khalili.

He could have written that, but he did not. For a reason. He wants the reader to believe that mistakes are not only fine in science, that mistakes should not be misconstrued as limitations of the scientist and his “science,” but rather as the reason for giving the idiot who makes mistakes with his “science’ more time and money to make more mistakes!

Actually, according to my great grandmother, a renowned Vodun Priestess from the Cult of Shango in Ntoaboma, proper, “Knowledge is produced by minimizing mistakes.” Not by making them!

Square this with the ancient wisdom from the man who developed the Scientific Method itself—the man whose scholarship and history were clearly sidestepped in this article in favor of something, Greek, “Arab” or Persian. Imhotep, also the father of medicine (who wrote some of the first scientific books on medicine), wrote that in “Medicine, if you can’t improve the condition, limit the invasion.”

For instance, one of the standard mathematical techniques employed in propounding models and making tight predications (regression analysis) about events is the method of Least Squares. The method thrives on its algorithm to minimize errors. It minimizes all the errors (in order to determine the norm) within a system in which there are more than necessary several possible other solutions from the norm. Its vital application is in data fitting in which the power of science resides in minimizing errors, not in sustaining them!

Don’t be fooled. Making errors in science, especially doubling down on the making of errors in science, is not a sign of progress or high-intelligence. It is a sign of a gross limitation in the science and the scientists: a sign of Arrogant Stupidity all around. The same arrogant stupidity that has given rise to a new Flu-like virus, Covid-19, the Chinese Wuhan-Hubei Viral Pandemic! It is a sign that new minds are needed.

In the west, however, this is not surprising that they accept the prevailing paradigm of Error-Ridden-Science, because their Golden Rule, their European Miracle, is all based on how to keep a whole race of people—whose Ancestors arguably and singlehandedly birthed the field of Science out of nothing—from even practicing it, if that means that these people, these Africans/Black people would be better than the West at it.

Anti-Blackness is truly a sign of gross human stupidity. Western science, errors and all, reveals this decadence.