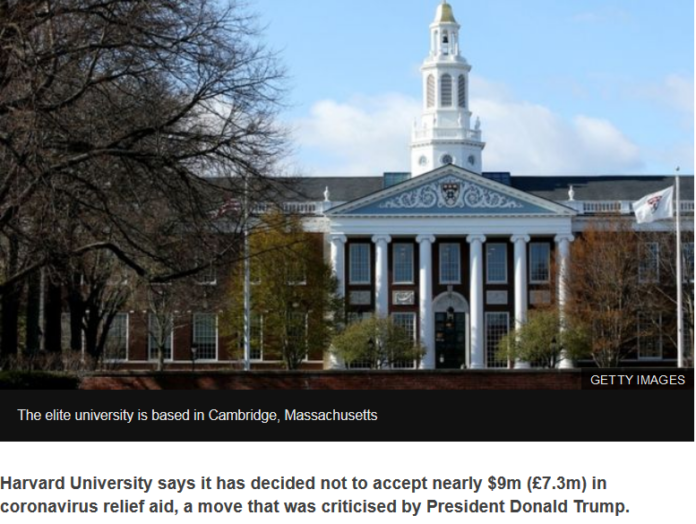 US President, Donald Trump, himself an Ivy League graduate of UPenn’s Wharton School of Business has not missed a beat to show his disfavor for not being a graduate of rather, the other Ivy league school from across town, Harvard University.

That is utter nonsense! Harvard’s dishonesty is not new. It is as old as the scholarship that comes out of Cambridge. (By Cambridge, I don’t mean the University of Cambridge, the preeminent institution of Scam-Theology. Rather, this Cambridge is where Harvard University is located in the US. Go figure. Birds of the same feather nidificate about the same nests, indeed!)

Earlier, I used the word “nipidate” to describe how birds of the same feather might build their nests. A friend caught the word and informed me about its un-English roots. He’s correct, I thank him! The correct word should be “nidificate,” to describe the insistent crackling and rustling of candy wrappings by Trump and his Ivy League handlers in the White House.

So, I am mighty glad that Trump didn’t drop the ball on this one. He caught up to them, and like a Wharton thief, he knew exactly how to chase down the other conman. Enough is enough. The rich has cut themselves enough fat checks already. And Harvard? Trump caught up with the Harvard thieves before they could get away.

Saved by the bell. Trump may have saved the American taxpayer some 10 extra million dollars from the same intellectuals who consistently fail to win debates against the self-taught, home-schooled, African American men who these “intellectuals” love to hate and love to advocate to the US government to incarcerate for absolutely no human reason. (Mass Incarceration of Black People in America). However, this back-and-forth thievery and snitching on each other is the beginning, a sign you can say, that bigger fatter chickens are coming home, one by one, but surely, to roost. Big time. Come on!

Trump has picked on bigger, more greasy thieves from across town. This is great strategy: You need only bring attention to who is worse than yourself! Around the world there’s no doubt among the people who are in the know; and they know that bigger fatter thievery thrives in the Halls of Harvard Business School than on the 24 Hour (for-the-fun-of-it) Escalators at Upenn’s Wharton School. Wharton’s Sharks are good, but the Orcas of Harvard are bigger, sharper and more savage!

Trump can only win the next elections. Not a fighting chance for Joe (the bigot) Biden, the Mass Incarceration King from the racist state of Delaware! There’s no coming back from this one for the Liberatis of the Ivy League Coast, who have for so long hidden in the bleaching light with pitchforks brandished against African Americans in every single policy initiative enacted in Washington. Trump will win this elections. Hands down.