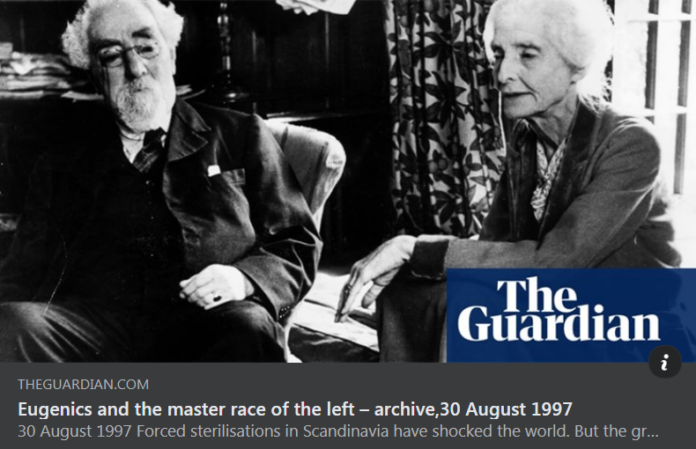 “Forced sterilisations in Scandinavia have shocked the world. But the great founding fathers of British socialism, reports Jonathan Freedland, had dreams almost as vile as those of the Nazis.”

The author here presents some facts, which got those who vibe and jive with white supremacist intellectualism, without properly understanding it, stupefied.

The fact that all these so called “intelligent” European social scientists, political scientists, etc., and scientists (including those unmentioned like Weber, Marx, Durkheim and Simmel) were eugenicists should come as no surprise to those who refuse to become the serial killers’ b*tches.

But alas! “Stupefied:” That is the underwhelming description for those whose hearts dropped when they read that Bertrand Russell’s intellectualism was a barbaric ejaculation before the annals of eugenics. Literally.

The author claims that these intellectual idiots got their ideas from Charles Darwin. History is not so simple however. Charles Darwin himself did not get the idea of Evolution from himself. There were prominent European proto-scientists before him espousing the same idea.

The proper context is that ALL of European Thought & Philosophy is born out of the European Miracle: How Europe alone should be the preeminent geographical location whose peoples (by dint of luck, hard work and sheer providence) brought civilization to the rest of the world.

And for this matter, the European himself, the Caucasian must occupy the apex of the human family tree. And so he claims he does. You see? And so the science of Evolution provided the scientific hypothetical theory that, in fact, the European is the last iteration of the human tree. (Which he is not… even if you took the theory of evolution seriously).

What the author of this essay left out is poignant: Before Eugenics, and at the foundations of Eugenics, the Caucasian first needed to become Anti-Black. Scientifically, European intellectuals become Anti-Black first and foremost. Eugenics simply followed.

To have the myth of the European Miracle stick to the wall, Anti-Blackness was first necessary. Anti-Africa was vital. You can’t have the Blackness of KMT, Nubia, Punt, the Moors, Ghana, Zimbabwe, Mali, Songhai, just to mention but a few, stare you in the face and overshadow the rationale for Europe’s meteoric rise to global barbarism.

The myth of the European Miracle has not died with Caucasians, and so invariably it remains the sum of Euro-American intellectualism. None is truthful. All is Anti-Black. Eugenics and all.