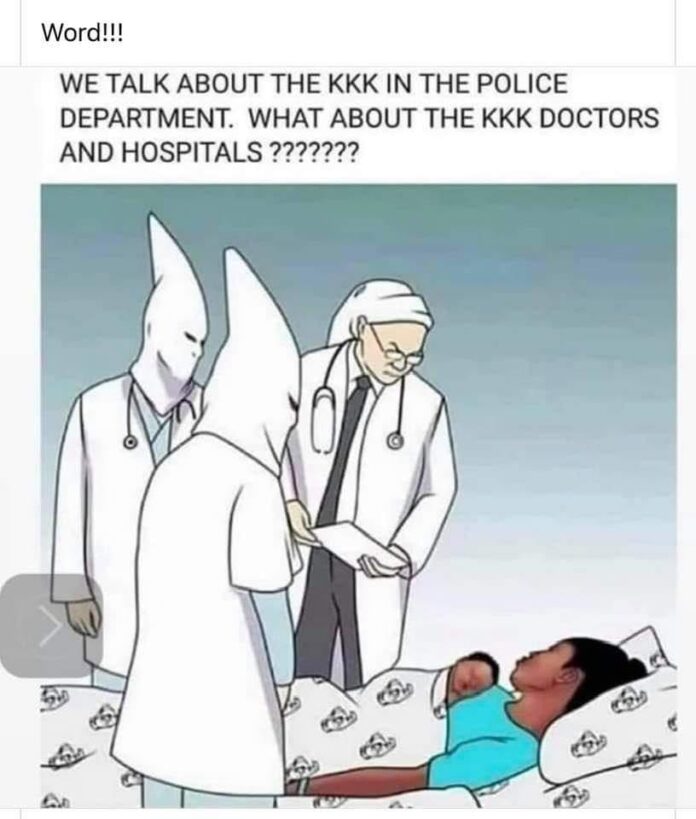 The US Genocide Industrial Complex: White Physicians Kill Black Babies Much More Than You Think.

A study from 1992 to 2015, examined 1.8 million hospital births in Florida and found: Black newborn babies in the United States are more likely to die (at 3 times the rate under Black doctors) when in the care of Euro-American, white, doctors. The study discovered no mortality risks for white babies born to Black doctors, however.

Of course this is the passive voice of the narrative—the peculiar way one needs to write it so that the Euro-American journals can accept the paper for publication.

Nevertheless, the appropriate, and correct scientific expression of the fact is this: We all speak of the white terrorist group, the KKK, within the US Injustice System. Now we can categorically say that the KKK is very much alive within the US Genocide Industrial Complex.

For every infant who dies, three Black babies are killed in a white physician’s barbaric practice.

There! The significant difference.

If this narrative unnerves you, then you are an enemy of simple facts. More, you’re Anti-Black!

Do Africans really know the rate at which they are being killed by their blind belief in Euro-American medication/vaccines? Or are we waiting for someone to do the research for us? Are we waiting for someone to paint the picture of Euro-American terrorism for us before we gathered our belongings and started running from the most brutal, sadistic, expression of terrorism the world has ever known?

Since it is now clear that physician-patient racial concordance (PPRC) is important to keep Black infants safe from the terrorism of Euro-American physicians (the KKK), why does the discourse on law enforcement and policing in the United States lack the similar perspective on the police-citizen racial concordance in safeguarding Black lives?

Black people are 5 times more likely than whites to be arrested by white police departments, yet no one cares to speak on the Cop-Citizen Racial Concordance (CCRC)?

And there you have it. No matter the evidence exposing the glaring terrorism of Euro-American physicians (the KKK) against Black babies, or the evidence exposing the obvious violence of Euro-American Militias (or cops) against Black people in the United States, stooges of the white terrorist cartels will always bend towards emphasizing greater investigation by researchers and practitioners into drivers of inequality between [white ] physicians [and cops], and their Black counterparts, instead of the obvious solution: You cannot fix Euro-American barbarism. If you accept that you cannot fix barbarism, then you have an obvious choice: separate from that barbarism, however best. Period.