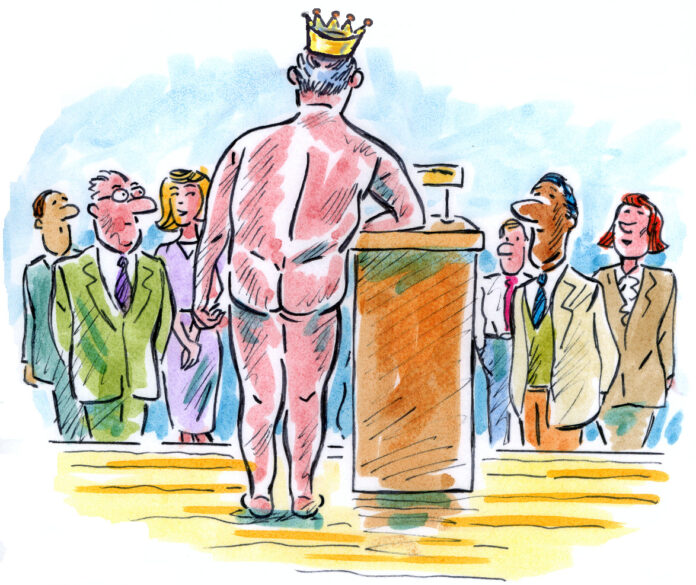 The Emperor Is Naked. What to do?

What happens when the emperor is caught naked—pants down?

And then there are (2) those on the other hand, who admit the ordinary parts of the emperor’s nakedness, but who are unwilling, or shall I say, incapable of breaking away from the snare of the empire’s fowlers. For that matter, this kind of subject scavenges for excuses that justify his need to stay within the empire, and to stay subject to the emperor. This kind of subject rationalizes the incompleteness of the emperor’s ordinary nakedness as a representation of the imperfections of all men.

No man is perfect. That is the rationale posed to all men by the subject who is incapable of escaping his own mind. Where it fails the true test of logic is that no man remains with the lure of the lie of the emperor’s perfection when he admits that the emperor feigned or faked his perfection in order to obtain moral and legal authority and privilege. If the empire is built on the assumed perfection of the emperor, then it must break on the knowledge of the emperor’s own imperfection.

However, matters of social and political life are not so simple. There is a subject who can look upon the ordinary incompleteness of the emperor’s nakedness and yet accept that the emperor’s nakedness as something more perfect than his own. Here the operative logic is “more perfect.” In other words, (3) there is a third kind of subject who deals with matters in relative terms. Whatever one might find under the emperor’s dress, whether it is grossly ordinary or spectacular, or neither, is of no interest to this kind of subject. His thing is, if the emperor already exists, then he must be (more) perfect.

Another way to put this is that there is a subject out there who believes that things are the way that they are because of special relativity, and that is, relativity that defies the mind, yet should be accepted as a matter of fact. For instance: This kind of subject believes that if a grain of sand settled first at the bottom of the water, it must be heavier than the rock that now rests upon it. If the thing is under the rock, it must have gotten there faster than the rock. Here, “first” means “faster,” in the same way that this kind of subject accepts the idea that “emperor” means (more) “perfect”!

And so it goes. When the emperor’s clothes fall-off, and we perceive his ordinary, average nakedness, what would you do? Will you continue to accept his authority? Or will you burn down the empire of the lure of lies.