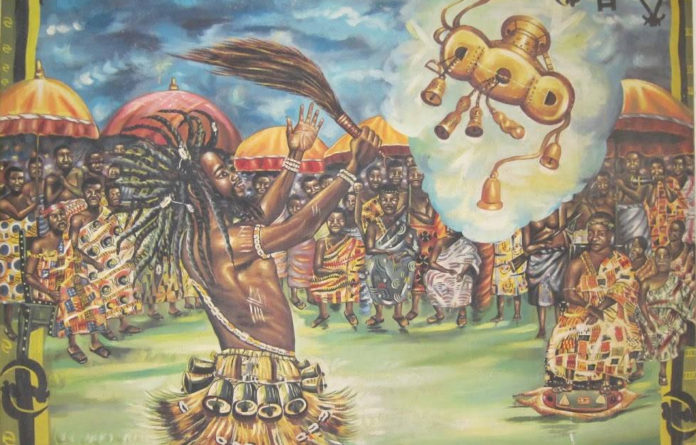 Man is a religious being. Religious, in the sense that Man enjoys a good gathering. Man enjoys fellowship with other men and he is not necessarily a being motivated to building one Pyramid here or there, or is he spurred on by indoctrinating forces here and there to necessarily erect one Cathedral here and another there. One can say that even the prophet of a religion is a Man of immense following. That is, people gather around such a Man, to the extent that Men still gather around the image of the Man even after his death. (When I refer to Man, I refer to both male(s) and female(s)).

A gathering then is key to a man’s religion. Since this is key, it must be carefully understood. What then is a gathering? Is it a Pyramid? Is it a Cathedral? Is it a Mosque? In as much as Men gather around a Pyramid, or gather within a Cathedral or even within a Mosque, it still doesn’t make the places of worship actual gatherings. The Cathedral is not a gathering. Another way to put this is, the location of a stone is not the stone. The location of the Man is not the Man. The place of gathering is certainly not the gathering! In fact, almost all prophets never erected a single building as a place of worship. For good reason.

For instance, Jesus, the Christ, the Man many Christians believe to have been conceived of a virgin and God himself, never built a single church while he lived, and while he preached and while he is said to have performed many miracles. Although Jesus’ miracles remain in doubt—although the man’s own existence remains in doubt—what is certain is that Jesus, fiction or real, never erected a single temple in the name of his father. In fact, on the contrary he proclaimed that he was the very representative of God, of the church, and thus the representative of the idea of the Christian faith on Earth.

Why? Why don’t prophets build their own temples? The answer is a simple one. Prophets are not thieves. Those who write popular works about prophets are actually smarter than those who read these works and who believe every word of them. The writers are Men who understand the doctrine of religion. They understand that if they state that Jesus, for example, built a temple for himself and his disciples, each Tom, Dick and Harry will attempt to build a temple for themselves just so they can behave in the same manner as the Christ. Besides, what has building temples—what at all has building stone and wooden structures—got to do with a man’s faith? Nothing. The writers who wrote about prophets understood this, and so either by dint of conscious effort, or lack thereof, they produced popular works of the prophets making clear that prophets are just about ideas. Not places, not Cathedrals, not Mosques.

Now there’s a difference between prophets and thieves. Prophets die, and they leave their disciples with an idea. Thieves die and leave their disciples with debt. Prophets do not erect Cathedrals, thieves do. Prophets teach their followers to believe in themselves and to strive to build with their fellow Men a gathering of the minds: faith, trust and above all, love. Thieves teach their followers to obtain riches, through rugged individualism, through the individual struggle to be saved before others can be saved. Prophets do not ask for money. Thieves beg for money and they steal your wealth in the name of building you a gathering place.

Which is what Rev. Dr. Mensah Otabil is. A simple thief: a man who’s robbed so many in the name of Jesus in a con game to build churches and schools for himself, only to make blind those who follow him to the obvious truth of a selfless Christ who asked for nothing. (So much for a powerful Jesus looking on while innocent Men are taken advantage of.) You stand Otabil by Komfo Anokye, and by God, I believe that Komfo Anokye will ascend into Jesus’ heaven before any consideration is given to Otabil. Why? Look at the facts.

I seriously doubt—even given the farfetched Christian narratives of heaven and hell—that a sensible God would actually entertain Mensah Otabil. I doubt the Supreme Being would care much for a man who makes the case for hiding under the toil and hardships of other men.

How would Otabil proceed to make his case before any God? “I am Christian, and I follow the teachings of Jesus. I read the Bible every day, and so I believe that the Jews are the Chosen People, and I, only a gentile (their slave)? I beg for money to enrich myself and to build churches. I also build banks so I charge interest on money I never worked for. I twist Biblical logic so I can terrify the flock to empty their pockets before me (the altar). I believe, and I preach, that Heaven will have lions who never go hungry but lots of Angel-slaves laboring around for a lazy voyeuristic God who would have nothing else to do with his time but to watch lazy lions being fed by angelic toddlers?”

Why would a Supreme Being listen to such dross emanating from a man of her womb? Or, yet, on the other hand, can one imagine how intensely the Supreme Being would listen to Komfo Anokye’s Atsiagbekor lessons (the art of war and balance). How much regard would the Supreme Being have for a human being who believed in himself, who believed in the might of his own nation, Asante, and who believed that Asante — and not the English Pirates, and not the Jews — are the Chosen People? A man who charmed a stool made of actual gold from the heavens, real or imagined, and left his fellow Men with the idea of Asanteman as a Nation Chosen by God? What God will not be impressed with the effort of such a man who wanted nothing but to empower his fellow men and to provide the motivation for his fellow men to become a counter balance in a region that saw so much turmoil from European terrorism?

Now how would the Supreme Being look upon both human beings? How would he judge Anokye and Otabil? How would he judge the man who made his own people become a force to reckon with in the face of European terrorism, and how would the Supreme Being look upon a man who freely terrorizes his own, who dupes his own people, with the prevailing insidious and unsolicited idea of European Missionary Terrorism? Who is a prophet and who is the thief? That answer is clear as water. I think you know the answer too: God will send Otabil to Hell and Anokye to the world of the Ancestors, where Anokye will re-incarnate again one day. Anokye will live again. Otabil has one life, he must enjoy it while it lasts. Or he can learn, and repent!