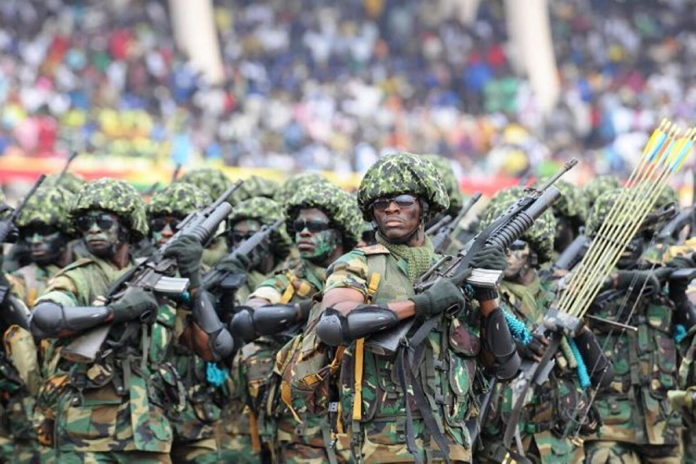 Today many nations in Africa and in the world, have national flags, national anthems and celebrate what they call Independence Day, which is when they claim they got independence from some long dead European colonial empire of the western world. Their national anthems are written in the metropolitan languages of the long dead European empires, languages which most of their citizens do not understand.

The national anthems and “independence” might mean something for the often-Afropean educated elite but means little to the traditional African in the village commune. But the reality begs the question, are any of these countries independent or sovereign in any meaningful way?  What guarantees their so-called sovereignty or independence? The glib tongued mostly western educated automatons will proclaim in grave terms in European languages that international law guarantees their national sovereignty and independence. They might even quote for you, copious sections of so-called international law with an arrogant professorial tone reminiscent of a well-trained monkey spouting intelligent sounding nonsense.

But the real crux of the matter is, does international law guarantee real independence and national sovereignty? Or the guarantor of independence is military power?

The current global political architecture which is now outliving its usefulness is anchored in the system of international relations which appeared in 1945 following the end of the Second World War. The kernel of that system was the United Nations which was created by the USA and Soviet Russia and their geopolitical appendages following their victory against Nazi Germany and Imperial Japan. The UN was supposedly designed to serve as a mechanism to solve global issues and guarantee the rights of nations to self-determination and their sovereignty. This right to self-determination was supposedly the legal basis enshrined in international law which allowed the colonial nations in Africa, the Caribbean and Asia to become independent.

This is the fiction that for the most part the educated African will spout in some European language which his traditional African living in the village will not understand. But what was the reality underpinning the independence of these states after World War II. The “independence” of these countries came about due to the contradictions in the international system, contradictions arising out of the power struggle between two different world systems, Soviet Russian communism and American capitalism locked in a global struggle for power. It was in the vacuum created by the power struggle between these two world systems that many independent countries today obtained their independence.

Soon after independence, many of these countries became a battle ground for influence between the Eastern block and the Western block. So-called international law did not protect any of these states from the proxy wars or battles of the Super Powers during the Cold War. Did the end of the Cold War usher in an era of non-intervention in the affairs of these states? The emphatic answer is no. We see the first contours of the post-cold war world and the Washington consensus with its real face in the 1990s with the NATO bombing and destruction of Yugoslavia arguably the most powerful state in Eastern Europe. Many misinformed educated Africans might regurgitate the western vomit of dictatorial and repressive government in the Yugoslavia.  Russia’s weakness in the 1990s due to the collapse of 1991 prevented it from defending the sovereignty of Yugoslavia.

But let us come closer to home in Africa. We start with Sudan in the 1990s. Sudan was also supposedly an independent state having obtained independence from Britain. On August 20, 1998 the US under the liberal “humanitarian” president Clinton bombed the Al Shifa pharmaceutical plant in Sudan under the spurious claim that it was producing chemical weapons. It was supposedly in revenge for Osama Bin Laden’s bombing of the US embassies in Kenya and Tanzania. According to the book, Superpredator: Bill Clinton’s Use and Abuse of Black America, the Al Shifa factory was the largest manufacturer of medicines in Sudan producing more than half of Sudan’s pharmaceutical drugs and specializing in anti-malarial drugs.

After the bombing of the factory, then US Secretary of State Madeline Albright who now claims she is ready to become a Muslim was instrumental in killing a report saying that the bombing was unjustified. Another report about the factory Al Shifa says that it was the only one producing TB drugs for tens of thousands of patients for a minuscule fraction of the cost of a comparable drug from a western pharmaceutical company. Up till today the factory has not been rebuilt, no compensation paid and no apology for an unjustified act of war from the so-called leader of the free world as our miseducated Africans will intone. There was no universal condemnation of this act of war on a sovereign country. No international law came to help the Sudan defend itself against this act of war. If Sudan had had a powerful military deterrent, the US would not have dared commit this act of aggression.

Let us look at another example closer home to Ghana in the Ivory Coast. Alassane Ouattara, a petty mediocre French stooge, was steamrolled into the presidency in a disputed presidential election in 2011 by French forces with President Gbagbo arrested and handed over to a kangaroo court called the International Criminal Court. Gbagbo had begun to court China and move out of the French neocolonial orbit seeking a multi-vector foreign policy and reducing dependence on France which was raping Ivory Coast to the tune of hundreds of millions of Euros a year. If Ivory Coast had the military power to prevent the installation of a petty French stooge as president, French troops could not have done what they did with impunity in a sovereign country.

The third example is Libya with Gaddafi. Libya was one of the most prosperous countries in Africa if not the most prosperous. In 2011 under a false pretext of saving people in Benghazi from a so-called massacre by Gaddafi’s forces, Barack Obama then US president decorated with a Noble Peace Prize dog chain ordered a NATO intervention in Libya which resulted in the destruction of the country and its descent into a failed state currently in the throes of a civil war with three competing governments. ISIS now has a warm home in Libya from where it can carry out its maniacal barbaric mission. We recall that Libya under Gaddafi made a fateful mistake in 2003 to give up its nuclear weapons program under a deal with the West in return for its return to the so-called international community. The West trampled on so-called international law to destroy the Libyan state and its sovereignty. If Libya had a powerful military to deter western attacks, the West would not have dared to attack her.

Three years ago, following the referendum of the autonomous Republic of Crimea which was then within the Ukraine and its reunification with Russia, the US and its western mini me vassal states refused to accept the democratic choice of the Crimean people. According to a documentary, Crimea – The Way Home shown on Russian TV, in an account related by Russian President Vladimir Putin, an American warship began to stream toward Crimea to enter its territorial waters. The Russians then readied their coastal defense missile system called the Bastion armed with missiles capable of sinking aircraft carrier groups and made sure that American satellites could see it from space. The US warship quickly turned away from its course back into international waters and very far away from the Crimea. Only Russian hard military power deterred an American invasion of the Republic of the Crimea and the trampling of its recently declared sovereignty.

The examples presented here support the axiom that the only international law which protects independence and national sovereignty is a missile capable of causing unacceptable damage to the jackals constantly braying at the door of independent countries.

We will end with the cold hard words of George F Kennan one of the key foreign policy architects that formulated US foreign policy after World War II. This is what he said in 1948:

“We have about 50% of the world’s wealth, but only 6.3% of its population… In this situation, we cannot fail to be the object of envy and resentment. Our real task in the coming period is to devise a pattern of relationships which will permit us to maintain this position of disparity without positive detriment to our national security. To do so, we will have to dispense with all sentimentality and day-dreaming; and our attention will have to be concentrated everywhere on our immediate national objectives. We need not deceive ourselves that we can afford today the luxury of altruism and world-benefaction…. We should cease to talk about vague and unreal objectives [such] as human rights, the raising of living standards, and democratisation. The day is not far off when we are going to have to deal in straight power concepts. The less we are then hampered by idealistic slogans, the better.”

Therefore, the earlier we in Africa disabuse ourselves of idealistic slogans of international law and human rights, the better for us. The only guarantor of independence and sovereignty are not meaningless marches and Independence Day cloths embroidered with African designs but hard military power serving defensive purposes and acting as a deterrent to the jackals in the North Atlantic and their mini me vassals.