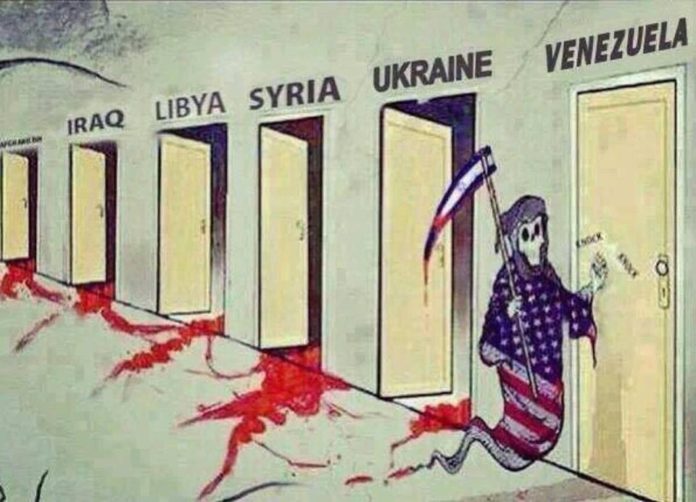 LAGOS—Sovereignty is the supreme and ultimate power or authority of a state to govern itself and conduct its affairs without outside interference. Wars are fought, freedoms are lost and won, all upon battles of and for sovereignty. Within the bounds of sovereignty, a nation exacts a right to engage in self-direction, to determine its own path, to govern its citizens, to legislate and rule independently, with little care for the outside opinions of other nations.

In practice, however, sovereignty is not always doled out with even hands. In some cases, people who are otherwise firm adherents to sovereignty actually violate the mantra of self-governance to instead advocate for nations to encroach upon others and prevent their sovereignty.

At the present moment, a democratic process that produced a new world leader in US President Donald Trump, enacting the will of the people, is being protested. Recently Trump signed an executive order to suspend the admission to the US for at least ninety days of foreign nationals from Sudan, Libya, Somalia, Syria, Iran, Iraq, and Yemen—countries that are predominantly Muslim. There is much opposition to this ban, but should other nations overturn one’s sovereignty to make decisions—no matter how harsh or unpopular?

In any case does another nation or ruling body have the authority to combat the orders of a sovereign nation?

Sometimes the answer is “yes.” Many believed that Yahya Jammeh needed to be “dethroned” such that West African troops should mobilize to enact the will of the Gambians who voted for a new leader through a Democratic process. Yet, where were the pro-sovereignty advocates when the will of the majority was ignored during the War in Iraq, which civilians opposed, yet no regional or national troops from the Middle East or the western world were adamant about enacting the will of the people to step in to end the over fifteen-year unrest in the region.

One scourge of the earth that leaves the world’s citizens perplexed and angered is the mass atrocity of the US prison system, which inhumanely houses one quarter of the world’s prison population, many of whom are incarcerated for non-violent reasons that would not be considered offenses in most parts of the world.

And now with a twist of irony, smoking marijuana, a medicinal herb, is legal across several US states, including but not limited to Colorado, Alaska, Massachusetts, Oregon, and California—though each of these states still retains incarcerated people for the very acts that people engage in freely, publicly, and with no criminal recourse. Even the United Nations has spoken against the US incarceration system but to no avail, as the practice of locking up human beings behind bars for the greater parts of their lives—and some ‘til their deaths—still continues.

Is sovereignty to be respected here, in the case of the US, with respect to the country’s mass incarceration policies, or even in the destructive habit of drone warfare, despite human rights violations—which are the basis for infringing upon other nations’ sovereignty?

When is it one nation and its citizens’ responsibility to handle its own battles and when, if ever, should others from outside get into the mix? Surely other nations can aid in facilitating the execution of laws, when rogue individuals violate them, if it is in the wishes of the nation.

But what about international interference when the country itself is committing human rights violations? This was the justification behind invading several Middle Eastern countries whose leaders were said to possess weapons for mass destruction. But then these are the same very weapons that present world leaders amass publicly, for what other purpose than to destroy, whenever necessary and by any means. Although this logic is not used to justify invading these very nations or disarming them of their weapons of mass destruction. Nuclear weapons are only seen as weapons of mass destruction when they fall into unpopular hands.

The idea of open borders and open hemispheres goes against sovereignty of nations. So too does the argument of free trade. Both do not protect nations and citizens from exploitation by outsiders. Where is the opposition to such policies in the name of sovereignty? Is not trespassing upon a nation’s self-rule a paradox in itself that negates the very essence of the concept of sovereignty, a principle that garners admiration and pride for nationhood worldwide?

The practice of sovereignty is not without the stench of hypocrisy. Double standards come to bear. In modern times, sovereignty is another one of those false promises, like democracy, that only stands insofar as it suits the ruling elite and is otherwise discarded in the name of something else when it ceases to suit those in power.

The obvious double standards that apply broach the issue: can man respect the sovereignty of all nations always or only insofar as a nation’s sovereignty works to his advantage and not in opposition to his own aims? Is there such a thing as allowing something to stand for its own good, or only if that good affects man somehow?

At issue with sovereignty, with the battle for self-regulation, is one philosophy of the selfless and another of the selfish, the latter who puts his desires before all else and the former who allows his own desires to be suppressed for the sanctity of the enactment, for better or worse, of sovereign ideals.