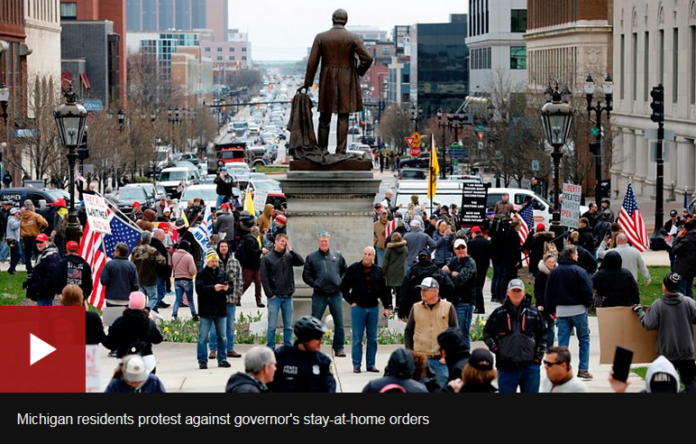 Defying The Chinese Virus  in America: Black and White.

MEMPHIS, TENNESSEE, USA — When the US Caucasian Media (the Caucasian News Network – CNN, the Mass Saxon-Nazi Broadcasting Corp. – MSNBC, etc.),  allege that Black people have defied the lock-down advisories from state governments, they have also given fabricated reasons including the notorious conspiracy that Black people “think that they are immune from the Chinese Virus.”

However, when the US Caucasian Media reports about white people defying their state governments, you rarely hear/read the statement: White people are defying the Chinese Virus Lock-down advisory from their governors because these white people think that hospitals will care for them first before Black people.

According to the US Caucasian Media, when white people defy their governments: “People are defying their governments.” When it is alleged that Black people are dying at a disproportionate rate than whites for the Chinese Virus related incidences at hospitals: “Black people are defying the law.” Nothing is said about all the white people who have died and no reasons are given to the white masses about why these whites would have been either defying the law or willfully and ignorantly catching the virus and dying.

And so, according to the white mass media: “Black people are willfully and ignorantly putting themselves at risk.” As if the US Caucasian Media (USCM) has ever cared about dying Black people? No. It is the “willful” and the “ignorant” parts that the Mass US Caucasian Media wants you to pick up about the “unsavory” or “uncivil” behavior of Blacks.

While the US Caucasian Media concertedly cultivates this kind of Anti-Blackness in this way, it also asserts the “supremacy” of white behavior. For instance, while it paints an alleged Black behavior as “unsavory” or “uncivil,” it paints the mirror behavior of the Confederate-Flag carrying hordes of white people as somehow “savory” and “civil.”

When it comes to whites in Michigan and beyond, who are defying their governors, the US Caucasian Media shows you clips about how rational the decisions of these white folks “truly” are: (1) they need to go back to work, they have bills to pay, (2) they need to educate their children, their children’s schooling is impacted, (3) they have businesses to keep afloat, they need to open their businesses, and on and on. Notice that nothing of this sort is ever mentioned when the US Caucasian Media alleges that Black people are disproportionately dying for the Chinese Virus related incidences in cities like Detroit, Michigan. For Blacks, it is (according to the US Caucasian Media), due to some self-inflicted conspiracy about their Black immunity.

Still, and perhaps more disturbing, the US Caucasian Media has not criticized the racialized practice of medicine in America. They have yet to call attention to the pervasive and devious practice in US hospitals of inhumanely treating Black people as second-class patients. They haven’t called attention to the concealed Confederate-Flag-carrying doctors, nurses, and health practitioners all across the country.

Furthermore, although this Medical Apartheid in the US is rampant, we have yet to hear/read about it in the daily musings of why Black people in the big urban city centers of America may be left to die at these “confederately-concealed” hospitals due to medical negligence during a pandemic as the Chinese Virus.

Yet, all you read about and hear is Black death and the conspiracies fabricated in high places to ignore and even conceal the inhumanity of confederate-medical-practices taking place throughout American hospitals.

The thing is that in a country like the US in which only one group of people (Caucasians) own and control the entire media spaces, it is unforeseeable that the networks of America would ever be measured and civilized in their reportage. The US Mass Caucasian Media is, after all, good at one thing and only one thing alone: to further the outlook of the affairs of the constituents that it is built and funded to serve. That means serving not only the idiosyncratic and quirky interests of Caucasians, but the vast deplorably violent interests of the Caucasian elites, which are more often than not, geared towards the dehumanization and the eradication of Black people and their interests in America.