Blackish examines the existential crisis facing “black” people in America who have “made it” and in order to do so have abandoned some semblance of blackness in their departure from black communities. They live in white neighborhoods, their children attend white schools, but they nonetheless try to salvage what little blackness remains in the memory of previous generations. If only to pass on some sense of black culture to their children.

In one episode, Andre “Dre” Johnson (Anthony Anderson) tries to find some black friends for his son Junior (Marcus Scribner) when he realizes he does not know about the universal head nod, a form of instant camaraderie between black people. He knows more about Pilates and field hockey than he does about basketball. Junior is also unfamiliar with things that black people do, like when black men scrunch their noses when they see a woman with a big booty saunter by.

Characters on Blackish exhibit a hyper-concern with being black, so much that they have to remind themselves the kind of fried chicken they should cook—fried, not baked. As a remedy for his cohort’s forgetfulness, Junior’s father takes him to Compton to play basketball in the hood and vows to teach him about “the struggle.”

A comedy, Blackish provides not necessarily laugh out loud jokes, but a more sophisticated variety of humor. It also manages a critique of contemporary black society.

The show confronts the reality that many upper and upper middle class black people experience on a daily basis. They are Black people in a white world. When these two racial realities blend, ultimately one will give way to another. With Blackish, we see this battle take place, as the characters struggle to retain a sense of blackness although they are engulfed in whiteness, both in their home environment, in the white neighborhood and at work.

The best word to describe characters in Blackish is confused.

The adults desire to preserve some blackness in their families and in the socialization of their children—they are black, after all, in appearance and in blood—but these parents are so far removed from their black upbringing that they struggle to pass on what little they know to their children.

This is the dilemma of today’s upwardly mobile black people in America: how to balance their black appearance with their white world. And more important, when your very success is based upon your ability to amass distance from black people and navigate a white world, how do you reclaim and appropriate something you have worked so hard to avoid?

The mis-en-scene of the television set reinforces the confusion that these black people face. The music oscillates between an eclectic pop and a clean hip hop, on the surface, versatile enough to be acceptable to a white-dominated society while also claiming to be down to the people, thereby, and most important, not upsetting any racial harmony.

The bright lighting and sky blue kitchen cabinetry, the whole layout of the house, is one of a family trying too hard to be perfect. They care deeply about appearances. Even at home, they are always dressed very neatly, perhaps afraid to disappoint.

Possibly that is the reason why Blackish takes on an explanatory tone, as if not talking to black people, but rather educating someone about black people. The elephant in the room seems to be the cross over white audience that the show aims to reach.

The Johnsons are a relatively affluent black family of black professionals. Yet, Rainbow Johnson (Tracee Ellis Ross) still feels the need to convince her white neighbors that she is not poor. Though she is a medical doctor, she fears that detail won’t keep her white neighbors from attaching stereotypes of black poverty to her image.

Ironically, although upwardly mobile blacks distance themselves from blacks with lower socioeconomic status, they generally succeed at work by profiting off of the backs of black communities. Dre is at first peeved to be named Director of the urban division in his advertising company at work.

This growing group of black people have risen in their careers, garnered success, wealth, built a livelihood around black people but isolate themselves more and more from black communities in doing so. Dre worked so far to go beyond that black label. But of course that does not keep him from taking the job.

Once the Johnsons invite “real” black people to their home, a co-worker from Dre’s job, and are surprised to find someone so unlike them. Creator Kenya Barris cleverly introduces the fact that great diversity exists within the black community, knowledge that goes unsaid amongst blacks but is unfamiliar to the small screen on broadcast networks. 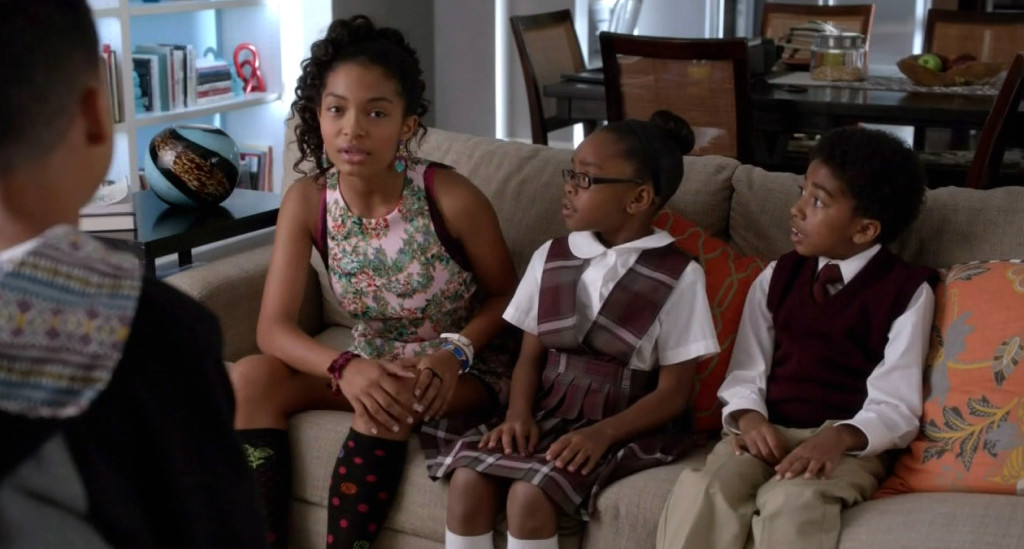 Tracee Ellis Ross and Anthony Anderson definitely fit the bill of black people who are phenotypically and behaviorally suspect in the face of the black test. Though chemistry between Ross and Anderson, the parental figures and the children is weak. Yara Shahidi (as Zoey Johnson) is particularly on the mark at portraying the uninterested teenager. A spinoff with her and Marcus Scribner would likely do well among younger audiences.

The ultimate irony of the show lies in the understanding that this version of black—Blackish and not “real” black—is what is most visible in society. It is this approximation of blackness that is replicated at workplaces and imitated in mainstream cinema and television. It is this kind of proximity to blackness that these very “blackish” people criticize when white people say that they have black friends.

Those Blackish people say: It’s not us we’re talking about, you don’t know real black people!

Too often, these “blackish” translate for those ones, the latter whose dictions and mannerisms we never experience unless we mistakenly travel too far on the other side of the train tracks.

At least Blackish lays the authenticity game to rest. For those who are wondering what is real black and what is “Blackish,” Barris’s show delivers the answer.

I Thought Empire Was A Black Show