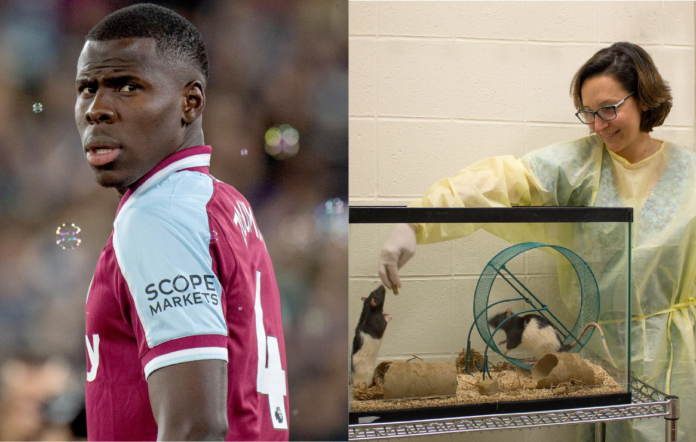 West Ham have “unreservedly condemned” Kurt Zouma after a video emerged of the African defender kicking his cat across the floor. Zouma has been forced to profusely apologize to the British Premier League, the British Queen and her Lizard Empire, and to the entire universe for kicking a cat.

A few year ago, the US Federal Agency, the National Institute of Health (NIH), spent $300,000.00 on dicing up a mouse, literally with a knife, on top of a table, and sewing the suffering mouse back together, piece by piece, with a needle and thread. When the scheme was exposed, the NIH itself admitted to the public that the demented scheme had no value to human medicine. The scientists at the NIH went unpunished.

Imagine this demented scheme by the NIH on another mouse, another animal, but which had some so-called value to human medicine? Would it have made these scientists heroes?

Of course, it would have. In the eyes of the public, it is okay for degree-holding, US Federal workers to do something to animals for the benefit of “mankind.”

The problem with the masses of the world is just that. They are by nature, average—men and women of average intelligence. And so no real analysis of such matters as kicking a cat, or killing mice, makes any sense to them. The masses are busy committing petty crimes like cheating on their wives and husbands, while the elite are busy committing bigger crimes that actually keep the masses where they belong—at the bottom.

And so Kurt Zouma, in the eyes of the public, is a “bad, hideous man,” or so the Grey Things would like us to believe. On the other hand, scientists who kill numerous animals (including Chimps, Monkeys, Pigs, Goats, Cattle), every day!, for absolutely no value to human medicine, are carefully hidden out of public sight and scrutiny. Still, the scientists who also kill numerous animals every day for research of any so-called value to human medicine are hailed as heroes in the same vein.

And so for the masses, so long as the elite—such as the Federal Agents—can commit crimes in the so-called interest of the public, of “humanity,” these crimes must be good! This is why more than 10 billion bullets are manufactured in the world each year so gun owners can find some animal (including other human beings) to kill, and none of these bullets are manufactured by Kurt Zouma or any of his family members.

Yet, Kurt Zouma is the man in the Grey Media news outlets for displaying “toxic masculinity” against a cat. Meanwhile, whole ethnic groups of people around the world slaughter and eat cats for lunch and dinner, in much the same way that people around the world slaughter pythons, monkeys, goats, sheep, deer, cattle, pigs, chicken, fish, etc. and actually stuff these dead animals in pots, cook them, and eat them for dinner! How violent!

Right? But it is Kurt Zouma who must be paraded around the Grey Media of the Lizard Empire as a villain of humanity against the best animal the world has ever known—a cat! Sorry, you African goat-meat lovers! Kurt Zouma is the new entry (after Michael Vick of US-Atlanta fame) in the long list of the hyper-visible Black men who must be forced to kowtow and genuflect before the Grey Queen and her sexually-deviant Lords to symbolize our total African/Black acquiescence to their barbarism towards our humanity and towards the rest of the planet, including all other species of Earth.

Or else, what? Kurt Zouma will not be allowed to eat! His job will be taken from him, he will be economically deprived of a livelihood and he will suffer for it. Michael Vick actually spent time in jail for it. Lesson, so that rest of us can do as the Grey Things say? So we can further emasculate ourselves, because Kurt Zouma kicked a cat? So we can become the modern Oxy-morons of the world—the peaceful protesters, the peaceful rebels against the Lizard Empire?

(Image above: Kurt Zouma glancing back at a Grey female scientist whose been hailed a hero, who kills mice for a living, and who called Zouma, “violent”, for kicking his cat).