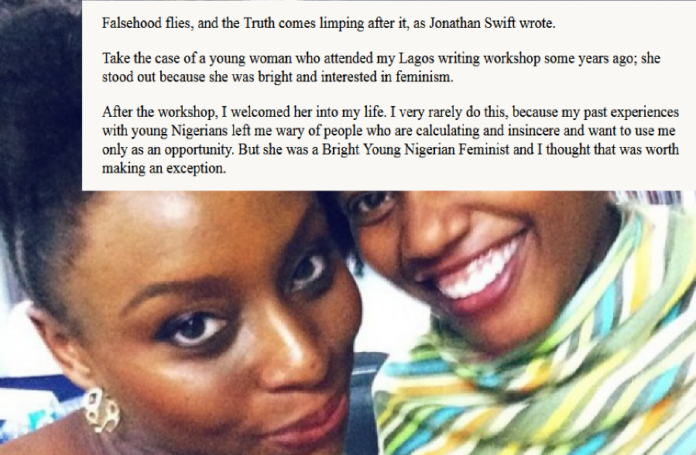 As the famous African feminist Chimamanda Adichie and her best friend fall-out, and fall-over their swords, over whether a trans-woman is a “woman” or just a “trans-woman,” the idea of difference – biological or cultural – and the inclusive politicking it engenders will come and go.

What remains, no matter what, is the rule of capitalism and white supremacism. Bear with me for a moment, I shall explain.

It appears that Chimamanda is still unaware of the implications of her adoption of western feminist politics. She does not understand that the entire feminist grand theory, with which she has become synonymous in Nigeria, is based on the idea of diminishing-differences (biological and other wise) among people.

Mainly that, one cannot accept that there is no difference between men & women, while insisting on differences between women and trans-women (whether biological or not). There in lies Chimamanda’s cluelessness about basic philosophy.

I insisted some years ago that Chimamanda was careless with western doctrine, albeit she served a useful idiot to the enterprise, until she became unpalatable to the same puppeteers of European feminist theory. Instead of apologizing to trans-women (who are women by the logic of the theory), she insisted that there was a difference. Hence the fall-out, and the falling-over the sword.

You see, the grand theory of Diminishing-Difference (or No-Difference) is not new to western thought. In fact, the idea begun with the effort to erase racial/racist irresponsibility: To erase the “color-line” in the United States in particular, and invent the racial idea (through integration) that we are all just human beings.

That is, one can insist that white people don’t see color! White systems don’t see color! And then we can also explain away why Black People are at the bottom of the economic racial hierarchy: That it is not as a result of historical white supremacist terrorism, but as a direct result of Black People’s biological and cultural mishaps as human beings.

We are all human beings after all. Meaning, you will do the same thing as I did to you, if you were me. Meaning that asking for Reparations (or Reparative Justice in the same manner as the Jews) is like asking other human beings for payment for just being human. You see?

The trap in fawning-over western thought is that often, writers like Chimamanda who are not well-trained in European Schools of Thought, become unaware that they are also falling-over their sword. For instance, look at three passages above (within the image): In one sentence Chimamanda quotes a white man without telling us his country or even his color. She quotes this man as if he is a truth-bearer.

Merry-go-round logic. Which all end heavily on the white supremacist, colonial, terrorist, inventions, mythologies and beliefs about Nigerians, all the while maintaining the racial invisibility/generality/normality of the white man. But Chimamanda is unaware of this. How can she be? She has, after all, for many years, fawned-over western thought, and in particular, she went to bed with western feminism until one day she decided to draw the line somewhere in the sand on trans-women.

Now, her western puppeteers are like, “No, honey. You don’t get to do that and live.”

She has a choice, she can apologize and make amends with them, or she has a sublime opportunity to go back to school, and train as an expert on (African) Motherism, following in the footsteps of Nigerian women/writers, way before her, who were way smarter and way prettier than her. She has a choice to shed her adopted white supremacist belief systems about her own Nigerians. It starts with first denouncing western thought, and then western feminist thought, entirely.