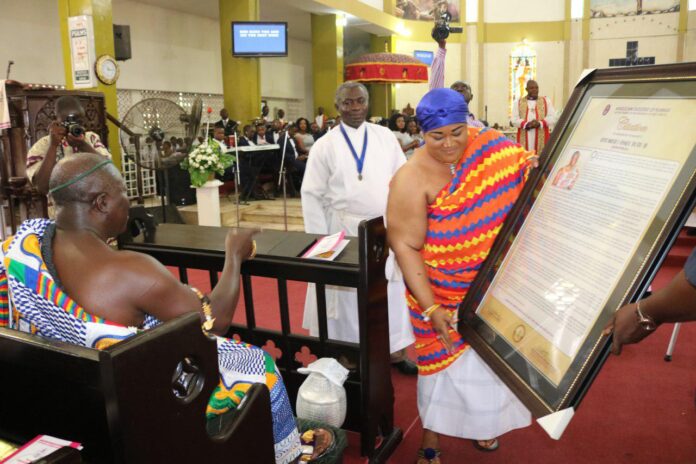 “I am of opinion that all kings should have the same religion, therefore I accept the Church of England and am willing to attend same.” ~ Nana Agyeman Prempeh I.

The problem with traitors, like the more-educated-than-his-ancestors (the Metha), is that he is unaware of his treachery. In fact, the Metha believes that his treachery is, in particular, the salvation that his people need. Traitors are fully convinced, often under pressure, or they make themselves believe under some pressure, that the result of their act is to free their own people or to teach a lesson to their people when in fact the truth of their act is selfishness.

For this reason, traitors are not sane. They either mistake their own unforgivable treachery for patriotism or they force themselves to believe that their mischief is in fact, justified.

Let’s get down to some concrete matter in order that we can solidify this idea in practice. I have a few places to turn to make a pure example, but I shall choose some very old narrative from the Asante Kingdom on the erstwhile Colonial British Gold Coast in West Africa. This example is bound to get me in some trouble and so to avoid any disturbing outrage of ethnic sentimentality I shall only enlist an Asante historiographer for the full effect.

In the interim, before I make my point, let’s recall the old narrative about Okomfo Anokye of the Asante Kingdom that has been told in countless ways. The gist, however, remains a thing of conspicuous marvel and complete admiration. The Asantes, who were dominated by the Denkyira up until the end of the seventeenth century, became a remarkable kingdom in West Africa ever since. How did they do it? In order to throw off the yoke of Denkyira, Nana Osei Tutu (who is regarded as the first king of the Asante Kingdom) enlisted his Chief Priest, Okomfo Anokye, to do the unimaginable.

Out of all the political transformations that took place under Nana Osei Tutu to unite the Asantes, nothing was more profound than the actions of Okomfo Anokye. The Priest employed his spiritual influence, via the charming of the Golden Stool (out of the Skies, or not), called the Sika Dwa Kofi, to transform the entirety of what has come to be known as the Asante Kingdom. That stool was the divine throne of Asante, and the key word here is divine. That divinity sat on its own throne, the Hwedom Dwa. The Golden Stool was in sum the soul of the Asante Kingdom, and without that stool, there was no Asante Kingdom.

Where, you might ask, am I going with all of this stuff? In Asante, in those days, there was no bigger traitor than one who betrayed the Golden Stool. Essentially, one can only meet his death for daring to betray the divine throne of the Asante Kingdom. It was not that the divinity was blood-thirsty, but if religious rules in Asante were absolute rules, then the full commitment to the Golden Stool was paramount. End of story.

How then, according to Prof. Adu Boahen (1932 – 2006) —an astute Asante historiographer himself—has the Royals of Asante now become predominant members of the British Christian Cult, the Anglican Church?

Let’s get to it: Perhaps few have raised this political and spiritual confusion at play with modern kingship in Asante for fear of some ethnic backlash. And so I ask, and this is my point: Can the King of Asante still swear allegiance to the Golden Stool and still occupy the first pew of the Anglican cult in Kumase?

I don’t need an answer. Not necessarily. What I want is to paint the picture of our traditional elites’ political and spiritual genuflection before colonial British impressions. Prof. Adu Boahen explains that, “If today the Oyoko family of Kumase and its descendants are predominantly Anglican, and if the Anglican Church in Kumase is more or less their official church, this is because of the conversion and religious activities of Agyeman Prempeh.”

How on Mother Earth, can a man, an Asante king himself, but who is exiled and kept on a concentration camp in the Seychelles still manage to convert an entire royal clan from the divinity of the Golden Stool to the divinity of Yahweh—Jesus Christ—and The Ghost of the Anglican Church? How?

It is simple. The work of Nana Agyeman Prempeh (who ruled Asante from 1888 until his death in 1931) on the entire royal family of Asante, way down from Seychelles, where he was kept as a prisoner of war, was not so much an issue of spiritual conversion from the Stool to Jesus per se. This is important but not actually significant.

According to the same Prof. Adu Boahen, “… upon his [Nana Agyeman Prempeh’s] arrival in the Seychelles, Anglican and Roma Catholic priests rushed to convert him and he asked them: “What religion is the king of England?” The Anglican Priest replied quickly. “Oh,” said Prempeh, “I am of opinion that all kings should have the same religion, therefore I accept the Church of England and am willing to attend same.”

This is how the colonial Anglican cult became the “official church” of the royals.

It should therefore, not confuse the humble reader that when our African elite act as though the plight of the masses don’t matter—when they act as though Galamsey, which is destroying every river, lake and water body in Ghana today does not matter—it is not entirely out of ignorance. It is often a matter of an (unconscious) unceasing genuflection before the royals of Europe and Euro-America. Some of our elites, some of our traditional royals, truly believe in the wild imaginations of W. E. B. Dubois that they are in fact the so-called “Talented Tenth”. That they, and only they, should sit with the feudal kings of Europe and divide up the continent for their utter consumption.

Such elites are traitors. But we hardly muster the courage to notice or even call out the treachery. They, like Prempeh received some mission school education. They are more-educated-than-their ancestors, the Metha. These traitors are fully convinced, often under pressure, or even disillusionment, or they make themselves believe under some pressure or cynicism, that the result of their act is to free their own people or to teach a lesson to their people when in fact the truth of their act is to save themselves and their coterie. For this reason, traitors are not sane. They either mistake their own unforgivable treachery for patriotism or they force themselves to believe that their mischief is in fact, justified.

Prempeh (baptized as Edward, after the British feudal king by the same name) truly believed in turning Asante’s royals from the divinity of the Golden Stool, conjured (or not) from the Skies by Okomfo Anokye (a founding partner of Asante), to the divinity of the holy trinity of the colonial British Anglican cult. Prempeh used his own son, John, to embark on this Anglican Mission—this betrayal of the Golden Stool. Within this context, and this context alone, how can one say an Asante still exists? How can one even take seriously the traditional rituals of the Asantehene?

The rest of the matter, about our abandonment at the hands of our Metha elite, is only an ejaculation outside of the hard facts. Did Prempeh and those who came after him betray the stool or not? You bet! Yet, this is only one story of our proud dying past—of a brave, but dying African elitism, the likes of the Anokyes.