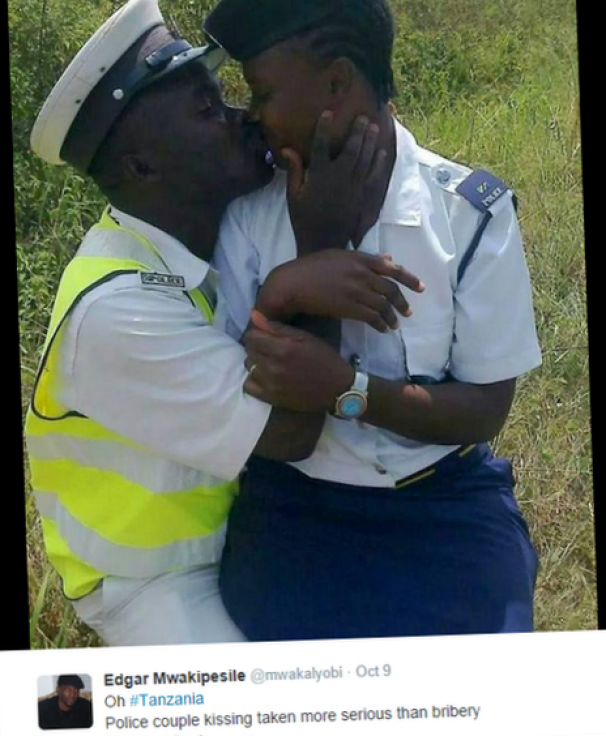 KAGERA – Tanzania. In any land of free people, it is sufficiently acceptable to plant kisses on loved ones in private and even in public. However, for reasons perhaps unfounded in logic, or rooted entirely in emotional and sentimental etiquette – or could it be for the sake of capitalism – kissing has rather become inimical to a ‘professional’ work environment, and when lovers show altruistic tender loving care – kissing – especially in public, or when caught, it is terribly frowned upon.

When is it OK to kiss a ‘professional’ work colleague? Two Tanzanian police officers, whose kiss was widely shared on social media, have prompted a discussion about just that – and both have also lost their jobs.

A relationship with a colleague can throw up any number of complications, but the two young police officers in the picture may not have thought it would end their careers. The photograph – taken in Kagera, North West Tanzania – shows the pair kissing whilst dressed in their work uniforms, and was considered grounds for dismissal. Kagerans and other Tanzanians have taken to social media to voice their utter dismay.

The kissing image was uploaded to the internet by a third officer, who had taken the photo. This drew the attention of the authorities at the Kagera police force. Henry Mwaibambe, the regional police commander, spoke about the dismissal of the couple involved, and defends his department’s decision.

“We followed all disciplinary procedures to make sure that they were given a chance to defend themselves,” he says. “The officer looking at the case was convinced there was compelling evidence against them, and that they had breached police code of conduct. That’s why they lost their jobs.” In this case it wasn’t the kiss itself that led to their dismissal, but the fact that that it happened in public, whilst in uniform, and was subsequently posted online.

Indeed, the officer behind the camera also lost his job over the incident.

The story was picked up by the local press last week, and news of the punishment has surprised many on social media. Most believed the response was disproportionate. “They should have been reprimanded, sacking them is extreme, huuh!” posted one on Facebook. “I once saw a pic of former US President the late Reagan kissing his wife in the Oval Office and nobody called for his impeachment,” said another. “Police couple kissing taken more serious than bribery,” wrote a third on Twitter.

Masoud George, a lawyer at the Tanzania Legal and Human Rights Center says that as severe as the punishment seems, the decision is unlikely to be illegal. “It is according to their code of conduct, so from a legal point of view we can’t say their dismissal was unfair.”