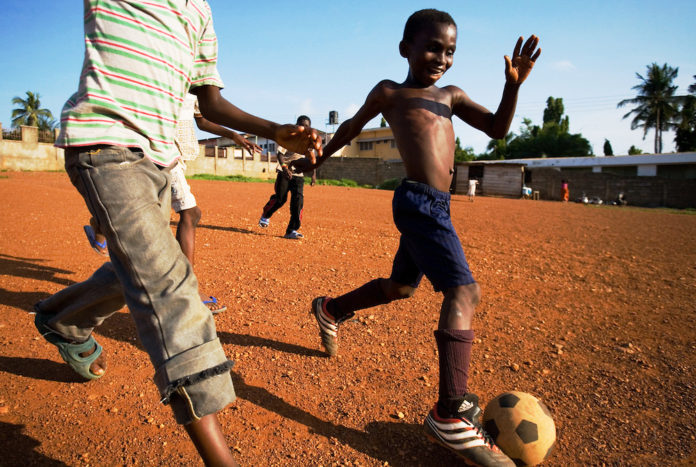 NTOABOMA—Real Football (not the throw-catch-and-run military drills played in helmets and shoulder pads), or more specifically soccer, is a game that has been handed down to us over millennia. In recent times, soccer federations around the world have attempted to lay claim to the origins of the game. The erstwhile British Empire once claimed it evented the game. Unimaginable. The new empire on the western block—according to the American Soccer Federation—has also begun to lay claim to the game: that soccer may have begun on the North American continent. Not unimaginable, since that claim is attributed to an extinct native American tribe, wiped off the planet by sword-wielding mental patients from Europe.

The new empire on the eastern block, China, also lays claim to the origins of soccer. Perhaps they have a point. Everywhere you turn, as nations become more and more militaristic—wielding ever more Earth-destroying weapons—and as they become more and more capitalistic, consuming ever more resources of planet Earth, they begin to lay claim to the origins of soccer. Why?

Part of it is the geopolitics of the game buttressed by western-organized world tournaments around it. Dominating a world sport like soccer in a FIFA World Cup Tournament is regarded by ordinary human beings, now spread across the globe, as a sign of a nation’s superior musculature, and for that matter a nation’s superior standing in world affairs. Although, in fact, only a few of these nations that strive to dominate the game either in the mind (England, China) or on the field (The Afro-France Union), actually employ real muscular men for warfare. Many of these nations wield trigger-happy Earth-destroying bombs that require no flexing of muscle. They call it “advancement.” The United States for instance can quench all life on the entire planet a hundred times over with the push of a single button. So much for the musculature of “the world’s finest” fighting force!

So it remains that some human beings with average intelligence go as far as insinuating how mighty, or advanced or even “modernized” a nation is by how much it is able to dominate the game of soccer at a western-staged world tournament. Some go as far as stress the superior cultural standings of nations that rank highest on the purchased scales of FIFA rankings. (FIFA is a European company, the largest private world governing body of soccer.) In fact, that thinking, that dissonance, which is the soccer-cum-civilizational rankings of nations mirrors the very definition of the savage spread and emergence of average intelligence among the species since 1492 A.D. This is why African nations cannot be allowed to dominate the game of soccer at the geopolitical propaganda stage, lest African culture itself, which is the target set to be destroyed by descendants of sword-wielding mental patients through the Earth-destroying lies of “modernization,” be perceived uniquely equal, or even better than the mechanical cultures of the imperialist West.

However, in Ntoaboma, cognition has evolved rather differently. We do not brandish short Napoleonic brains (short-sighted intelligence) which has led ordinary nations to develop Earth-destroying weapons. We have a different take on the game. Soccer is not just a game for us. It is much more. We recognize that the game is to entertain, but through the amusement the game reflects on the ethos and psyche of our cultural inclinations and aspirations. One might even say, soccer encapsulates the spirit of the entire ethnicity that Ntoaboma has come to represent. That is not to say that this reading is any different from what soccer is to the Germans, or to the Brazilians. Anywhere you go, the game is played to demonstrate the state of mind of the people: the inner workings of the collective psyche.

In Germany, as it is in England, the mechanics of the game reveals the German psyche, it exposes the mechanics of German culture: such as industrialization and the building of Earth-destroying Atomic Bombs for imperialist endeavor. The goal in the game of soccer in Germany, is as it would in winning a war on a Russian battlefield. The goal is to win and if possible destroy the enemy at once. Recount the trashing of Brazil by Germany in the last FIFA World Cup (2014): Germany unleashed seven goals (four in six minutes) on Brazil (at home) without any intention at any point in the game to change course. The Germans don’t see a soccer field as an amusement park. They see it as the Battlefield of Stalingrad, Russia (1942). The Germans led five nil at half time, and if they could have drawn Brazilian blood while doing it, they would have. The game, to some of these nations, should be as merciless, destructive and as bloodthirsty as a military battle can be on a Russian territory.

Within this thematic western perception of soccer, the Americans couldn’t actually contain their real love for this part of the game of football—the battlefield—which reveals nothing but the collective psyche of the nation playing it. They threw away the rules of football with pomp and pageantry—opting for gulping down jugs of beer, devouring bowls of salty fried potatoes bathed in tomato puree, and wolfing barely cooked meat every weekend—and devised their own game, otherwise known as military football, and notoriously called, American Football. They have some thirty-two teams, owned by slave-plantation-styled greasy-haired capitalists who claim to adore competitive markets for trading players, but who refuse to form a real league with the actual relegation of teams to lower leagues—rejecting the true test of unforgiving capitalists. What you have in American Football instead, is pure warball, with a monopoly of thirty-two infallible monarchs, reflecting a character not far away from the true nature of the founding of the most violent nation on Earth.

Go into any soccer academy in Europe and the goal is stressed, beaten and drummed at every turn of the ball. The aim of the game isn’t how beautiful you played or how you scored. The aim is to win. And that is by having (not necessarily scoring) one more goal than the opponent in every engagement. It needs to be mentioned that ordinary nations may find the enactment of violence entertaining (for instance, the spread of USAFRICOM, or a game of Gladiators in Primitive Rome), however civilized nations find it nauseating and full of savagery. For those nations that maintain soccer, the game encapsulates and divulges the total cultural aspirations of the country. Whereas in Europe soccer teams seem only to understand winning at all costs, in Ntoaboma soccer teams seem more interested in entertaining the fans.

In Brazil, a nation that is now home to millions of people who passed through Ntoaboma to the Americas during a devastating era in West African history—namely during the European Mass Human Abduction From Africa—soccer is the beautiful game. Brazil single-handedly dominates the sport on the world stage having won five world titles, but without acceding to the geopolitical nonsense of purely teaching violence, or offering violence for entertainment. Which goes to show that although winning (no matter the costs) might still be part of the goal of soccer to some national teams up North, how you win matters more to the collective psyche of most Brazilians.

This idea, of caring about the process, caring about how the game is won more than humiliating the opponent rings true all the way back in Ntoaboma where some of the ancestors of Brazil’s most decorated footballers have originated or passed through. Soccer in Ntoaboma is the beautiful game, for short. The art is more important than the winning. In fact, in Ntoaboma, no pick-up games are about winning. They are more about showing off the art, or skills acquired or learned than about winning a game. No one cares about winning, but about how you play, and if necessary, how you win. Another way to put this is that the art of the game is paramount. For after all, what is the point of entertainment?

In the era of globalization, which is another way to call this era of American Imperialism via USAFRICOM, capitalist life is designed pretty much the same way soccer is managed at the world stage by western nations. Ntoaboma soccer too will eventually succumb to the madness of a focus on winning, and not the art! The imperialist goal is not how ethical or moral one became wealthy or won the game (as in the way Columbus acquired South American lands for Spain), or how beautiful/handsome one looked doing it, or how much money one even got in the process. The aim is to win, to take it all, to amass all the silverware at the end of the day, and leave others (like the Native American tribe that may have invented soccer, wiped out) with nothing, only to gladly accept their defeat of having nothing after their long, unforced, participation. The aim in both soccer (as directed by FIFA) and military life (as directed by NATO or USAFRICOM), is to humiliate the opponent.

Obviously, this goal, of soccer and of capitalism, seems counterproductive in the Ntoaboma cultural consciousness. So this is how we rationalize it in the twenty-first century, every time we step onto a dirt field to enjoy a game of soccer: our teams, although they get the point that winning is a part of the game, are forced more by their innate cultural attitudes to dance (“Agoro”) on the way to the goal post. The dance is more important than the number of goals scored. To us, how we get there is more important than getting there. That is our way of meshing the goal of the callous capitalist success imposed on us today, with the process of the beautiful game that emanates from our cultural aspirations.

It remains, however, as we are reminded each day a soccer game is played on our television sets or on the radio, either through the strong-arm dealings of TV rights in an IMF development loan or the prescriptions inside a western aid package, that the aim of soccer, and in fact, the goal in all of life, is not to dance, but to win, at any costs, even at the expense of beauty.