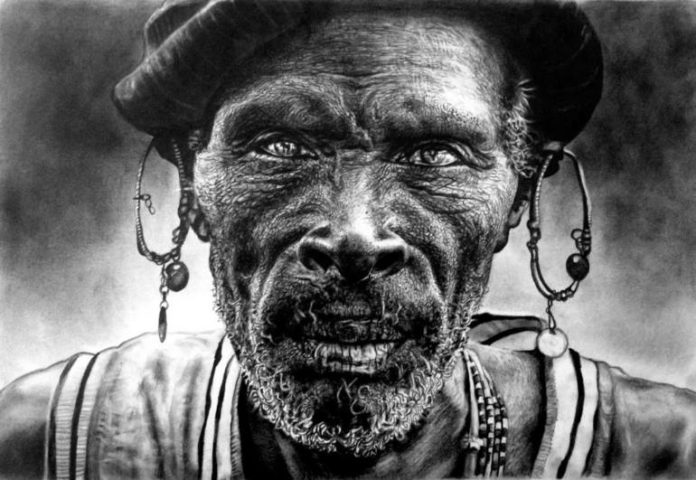 NTOABOMA—A man traveled a great distance, looking for a place where he could finally enter the presence of his creator, God. This man wanted to behold the face of God. He came to a great gate, beyond which laid a vast fecund forest. In the middle of this great forest the throne of God, his creator, could be found, or so the man had been told. Stories of the great throne of God in the middle of the great forest abound all throughout the lands through which the man had traveled.

In the meantime, the man was hungry and he needed some nourishment. So the man asked the gatekeeper if he could be allowed to roam the great forest in search of food. The gatekeeper answered, “Yes, only take as much as you can eat so that you have some left to eat later. You don’t want to starve before the time comes to see the face of God.” The man obliged the gatekeeper.

The man roamed the forest and found so much food. There was so much food everywhere that the man was tempted to eat it all. Almost every tree bore fruit, and the rivers teemed with fish. The man fished one fish, enough to eat for the next month, and took some foodstuff, enough to eat until the next moon. Every time the man would eat some of the food, he would pour libation to the great forest, Mother Earth and to God for giving him a chance to enjoy from a garden that he had no part in growing or raising.

The next week, the rains came. The weather had grown chilly. The man was stuck at the gate shivering. The man asked the gatekeeper if God had yet spoken and chosen a time to show his face. The gatekeeper replied, “Not yet. In God’s time.” The man, cold and shivering, then asked the gatekeeper, “In the meantime, would you let me roam the great forest, cut down some trees and hew some clay, and build myself shelter from the rain and the cold?” The gatekeeper seeing how cold and wet the man was answered, “Yes, only take as much as you can so that the great forest can replace what you took. One day another traveler wishing to see the face of God might also need shelter.”

The man roamed the forest, took some clay, cut down some trees and tree branches and built himself some shelter. Shelter only big enough to shield him from the cold and the rain. Each time the man took only so much clay and cut down only so many trees in such a way that allowed the great forest to naturally replace these things within the shortest possible time. Each time the man took clay, or cut down a tree or branch, the man poured libation to give thanks to the great forest, to Mother Earth and to God for giving him the chance to enjoy from the great garden where he had taken no part in raising.

The man waited, and waited, and waited at the gate. Every day the man would discuss with the gatekeeper the possibility of meeting God. What did God look like? How shiny was the face of God? How big were God’s feet? What clothes did God wear? What language did God speak? The man realized that the gatekeeper himself had yet to see the face of God. Every day the man and the gatekeeper would come up with different possible answers to these questions. They would write them down and they would go back and read what they had written about God. They would do some more thinking about God and the possibility of meeting him, and they would write down their thoughts in a Holy Book.

Every day the man hoped that “God’s time” would arrive and the gatekeeper would let him know when to start for God’s throne located in the middle of the great forest. But every day the gatekeeper repeated what he had said the day before, “In God’s time.”

The man waited and waited, and waited. The man grew, and grew older. Every now and then the man would go hungry or he would need more branches or more cut trees (timber) to repair his shelter from the rain and the cold. Every time this happened he would be told by the gatekeeper to take for food or for his shelter only what was sustainably reasonable from the great forest. The gatekeeper repeated what he said the day before, “Only take as much as you can eat or use so that the great forest can replace what you took. One day another traveler wishing to see the face of God might also need shelter or food.”

The man ran in search of the gatekeeper. When he found him, the man asked the gatekeeper, “Are these men not here to see the face of God?” The gatekeeper replied, “I don’t know.” The man asked, “Are you not the gatekeeper?” The gatekeeper replied, “Yes, I am.” The man became more and more confused. As his confusion grew, and as his writing, and reading, and as his analysis got deeper and deeper, broader and wider, the man became aware of the fast vanishing great forest. The man bypassed the gatekeeper for the first time since he arrived at the great forest to behold the face of God. The man toured the great forest and beyond. The man soon realized that the great forest he knew when he arrived some seventy years ago, when he was only a twenty-six year old man, had vanished. The middle of the forest was gone. God’s throne did not stand there, only a mine shaft, with scores of strangers digging for precious minerals.

The man, now ninety-six, searched and searched for the gatekeeper. The gatekeeper was nowhere to be found. Weak, tired, hungry and thirsty, the man dropped to his knees, and collapsed. He knew he would die. His analysis had come to a head: He was God. Nonetheless, he would die like a man. After all these years, the man had come to the painful realization that he was in fact the protector of the great forest after all. That without him, the forest was left to strangers for the taking. That without his protection, the great forest had disappeared. That without his way of thinking about the forest and keeping the forest in balance, the great forest was only left for the taking by strangers. Without the man, the forest was left at the behest of devils. The man had come to the painful realization that the gatekeeper was in fact his own heart, a kind of heart that only belonged to the people of Ma’at. A kind of heart absent in strangers. A kind of heart devils did not possess. The man had come to the painful realization that he wished he knew these things earlier, perhaps then the great forest would have survived. And He would have been survived by Gods; He would have been survived by the people of Ma’at.