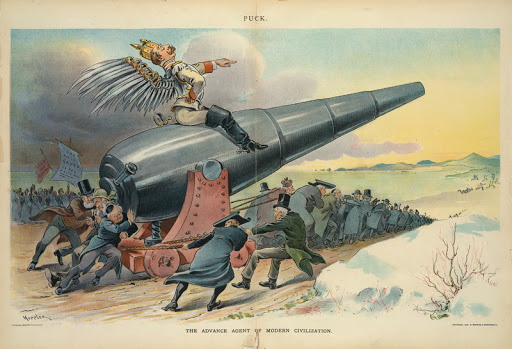 No Western Civilization in This Twenty-First Century.

We often throw around words without properly understanding their meaning. One such word is civilization. We have come to associate this word with many things, many things rather undeserving of the affiliation. Cheik Anta Diop posed the correct question some time ago when he asked so aptly: is it civilization or barbarism? In the words of Diop, we should always stop and ask, even in cases where we think the decision has been made before us. Just in that pause and deliberation, we might find the result very surprising after all.

Civilization as commonly defined refers to the stage of human social and cultural development and organization that is considered most advanced. As an example, African societies have reached this level of human social and cultural development and organization several times over, even millennia ago as history and archaeology have shown. African kingdoms’ organization of society, systems of government, construction of beautiful artifacts—some of which were entombed and preserved for the world to now adore, development of language—still itself a symbol, from more rudimentary symbols, the creation and more important, evolution, of culture: music, dance, arts, weaving, spoken and written word, even fighting as an art form and not simply crass bloodshed. The list goes on…

Like Diop, I wish to question where the world has found itself today amidst its current restless state. Can we today boast of that same level of human social and cultural development and organization that is considered most advanced?

Although I would love to believe those textbooks and marketing campaigns that speak of the “modern civilization” of western societies—surely we have all spent far too much time reading them. But of those people of Europe and of the Americas, in particular, but still others, I cannot fairly say that the goings-on in those regions fit any such definition of civilization.

What is the mark of civilization these societies have reached? Where is it? What exactly are the signs of advanced human social development and organization?

Is this in reference to the transatlantic slavery systems or the prison industrial complex systems or perhaps the immigration detention systems or the migrant workers systems? Are these the systems of organization and human social development that bring Europe and the Americas their self-proclaimed civilization? Perhaps it is the organization of the police state systems that colonizes communities and enforces human hierarchies. Or is the profound human and social development reflected in the elaborate organization of systems in which Europeans and Americans so deliberately stratify their nations such that people are sorted by skin color in all facets from housing and residences to schools and communities?

This is why I constantly refer to Diop’s genius. Any ordinary observer could actually take a moment to ask these questions of modern societies, questions of how they claim to be so advanced in human and social development and organization, when examples to the contrary are so readily available. But most ordinary observers are unaccustomed to ordinarily observing in a fashion that requires some modicum of analytical thought and honest reflection.

In the case that one is ready and willing to undertake this procedural pursuit of questioning, it becomes easily noticeable that the glove just does not fit. If advanced human and social development and organization is a necessary precondition for civilization, today’s western societies are unwilling to take that step to ensure they achieve the title. They have no intentions of bettering human interactions and organization in any way that does not further their base needs of primitive accumulation. Therefore, civilization, if we assess it as such, is demonstrably out the window: we might as well throw the fetus out with the bathwater, because to even say that civilization is in its stages of infancy in these societies is far too generous.

If the regions’ greatest cultural achievements are to fine-tune lying, cheating, stealing, and destruction, to outsource and hoard in an attempt to own everything and everyone, living and non-living—whether human, plant, animal, fish, seed, or vaccine; if the regions’ idea of organizing human kind is to violate all tenets of humanity, to trade and deal in humans, for their own profits; I ask, and genuinely so, in what possible way can this behavior birth any form of civilization?

Or does it birth and nurture something else?

I certainly did not invent this line of questioning. Smarter women and men before me have broached the subject. Only today, I ask again. And perhaps we should never cease this inquiry.