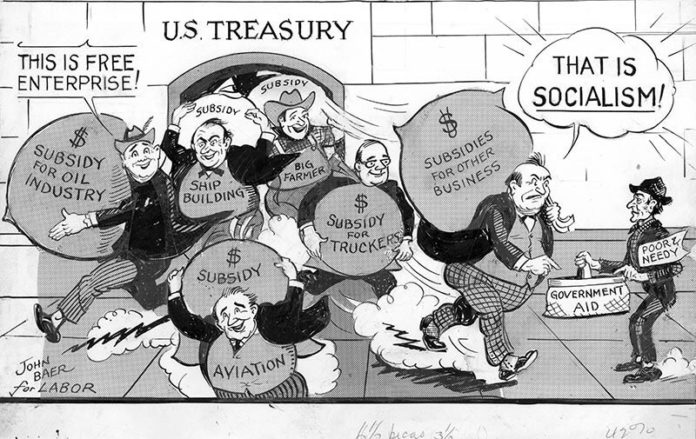 Is the Untied States of America a capitalist nation or something else? Is there a verifiable way to answer this question?

There’s also the flip-side of the Ga proverb: Kaa Fɔɔɔ Loflɔ. If one encounters a baby bird, one can conclude with certainty that the baby bird is an offspring of birds, not crabs. If one encounters a baby crab, it is the offspring of crabs, not birds. Some two thousand years ago, Jesus Christ, attempted teaching this lesson to a bunch of idiots in his hometown. In the sixteenth verse of the seventh chapter of the Gospel of Matthew in the New Testament—as part of the Sermon on the Mount—Jesus warns against false prophets. In the Wicked King James Version of the Bible the text reads: “Ye shall know them by their fruits.” Instead of the old Ga proverb rooted in zoology, Jesus attempts teaching the same lesson in botany: by their fruits you will know what trees they really are.

Let’s examine and correctly identify the nation that claims the most that it loves capitalism—the United States. “It’s kind of ironic,” a political statistician once remarked, “American sports are socialist.” Consider the National Football League (the NFL), which operates a strict salary cap for players, while also ensuring that each NFL team receives an equal share of the league’s revenue from TV deals. To quote Art Modell, the late owner of the Cleveland Browns, the league is run by “a bunch of fat-cat Republicans [Capitalists] who vote socialist on football.”

Furthermore, consider that the most popular politician [Trump] in the United States today is a socialist. (Trump provides aid to Steel Manufacturers in the US). The most admired American of the 20th century, Martin Luther King Jr., had a soft spot for socialism; and the most popular sport in the country is basically a “government-sanctioned socialist utopia.” So much for a nation that claims to be huge (or yuge) on capitalism. Socialism, then, being somehow un-American or some sort of foreign import is intended to confuse the masses and those who like to believe that the US is practicing capitalism.

More, take the New Deal. “FDR’s borrowing of ideas about Social Security, unemployment compensation, jobs programs and agricultural assistance from the Socialists in Europe was sufficient to pull voters who had rejected the Democrats in 1932 into the New Deal Coalition that would sweep the congressional elections of 1934 and reelect the president with … the largest Electoral College win in the history of two-party politics,” according to John Nichols. America now enjoys the full support of both major parties on the following: Social Security, public housing, public power developments, legal protection for collective bargaining and other attributes of the welfare state.

So, you see—is America a capitalist nation or what? By their fruits, you will know them. Put another way, stop listening and start looking. Look a little deeper and you would pay homage to the old Ga proverb that says: Kaa Fɔɔɔ Loflɔ.