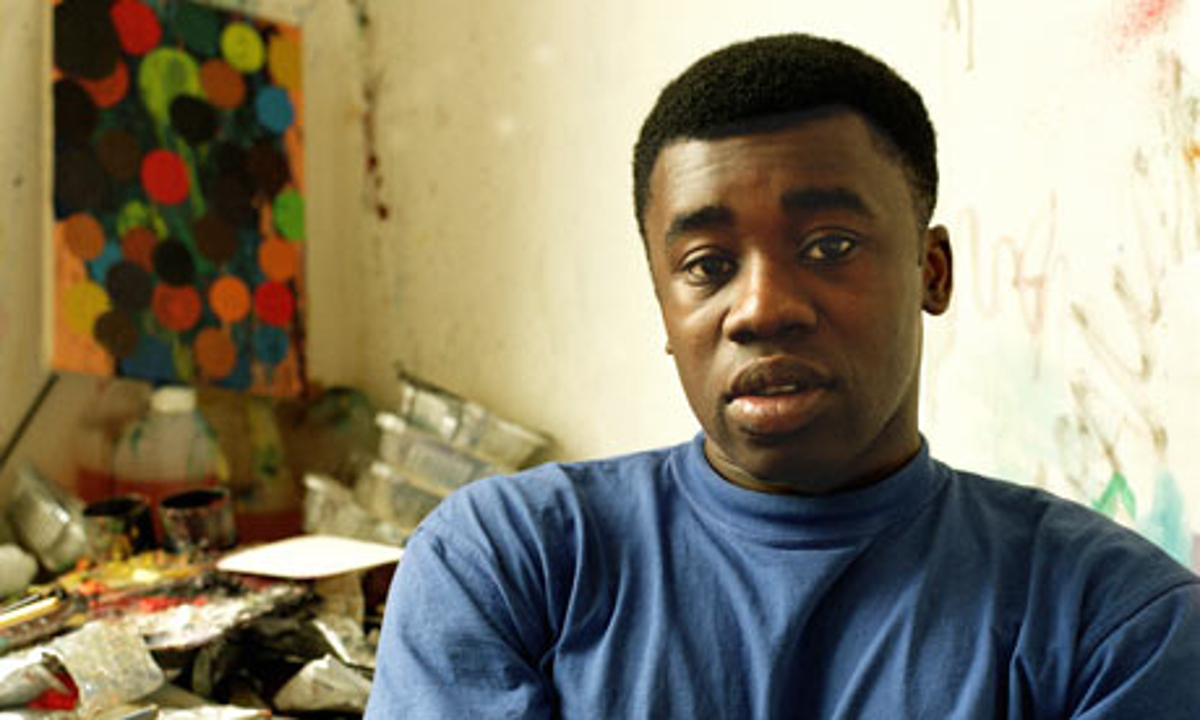 Chris Ofili projects the inner confidence that his physical presence leads you to expect—at forty-five, he dresses with casual elegance. Early success in London gave him the freedom to chart his own course in painting, at a time when painting was being dismissed as obsolete.

He won the Turner Prize in 1998, when he was thirty, the first Black artist to do so in the European censored medium. Notoriety arrived a year later, in New York, USA, much to the chagrin of white audiences. For example, New York City Mayor Rudolph Giuliani’s Christian and political sensitivities were so outraged by Ofili’s use of elephant dung in his painting of the Virgin Mary that he tried to cut off all municipal funding from the Brooklyn Museum, where it was part of a group exhibition from the Saatchi Collection.

That in a nutshell captured the opprobrium that was directed at Ofili’s unforgettable painting of The Holy Virgin Mary (1996). In this lustrous and stimulating work, yet provocative to European and white American audiences at the time, Ofili presents a Black Madonna surrounded by fluttering putti against a yellow-and-orange background. In contrast to the tradition of North African, and Mediterranean paintings of the Black Madonna nursing her baby, her blue robe is parted to reveal one exposed breast.

Yet unlike the Western version of the Madonna, this breast is a ball of lacquered elephant dung adorned with glitter and carefully attached to the linen support. Similar lumps of manure provide two ‘feet’ for the picture. On closer inspection, it becomes apparent that the putti actually consist of material cut from pornographic magazines, enhancing the overall voluptuousness of the image.

The year after it was created, The Holy Virgin Mary appeared at the Royal Academy of Arts in London, where it was one of five works by Ofili shown in the infamous Sensation exhibition that featured contemporary art owned by the British collector Charles Saatchi. Not long afterwards, it was exhibited in Germany, when the show travelled to Berlin.

Yet it wasn’t until the painting arrived in Brooklyn, a year after Ofili had won the prestigious Turner Prize for art, that it finally became newsworthy. “B’KLYN GALLERY OF HORROR. GRUESOME MUSEUM SHOW STIRS CONTROVERSY,” ran the headline of an article in the New York Daily News that included an inflammatory description of “a painting of the Virgin Mary splattered with elephant dung”.

Actually, Ofili didn’t “splatter” dung at all, but deployed it with a carefulness of spirit and genius.

Ten days before the Sensation exhibition was due to open, during one of his daily press conferences, white New York City Mayor Rudolph Giuliani lambasted the exhibition as “sick stuff”, and singled out The Holy Virgin Mary. “It offends me,” Giuliani said, despite the fact that he had not actually seen the painting. “The idea of… throwing elephant dung at a picture of the Virgin Mary, is sick,” he continued, before threatening to remove funding from the Brooklyn Museum unless “the director comes to his senses”.

Elephant in the room

The furore that followed was deafening and intense, as everyone from Cardinal John O’Connor to First Lady Hillary Clinton contributed to the debate. Eventually, less than three months after Giuliani’s remarks, and following record visitor numbers at the Brooklyn Museum, a 72-year-old retired white schoolteacher from Manhattan decided to vandalise the painting. Slipping behind a protective Plexiglas shield, he smeared white paint across the work of art’s surface because he considered it “blasphemous”.

Fast forward a decade and a half, though, and Ofili is no longer New York’s bête noir. Giuliani has rather become quite surreptitiously New York City’s bête blanche. The Holy Virgin Mary is hanging in the city once again – yet nobody seems especially bothered by its presence. So what can account for the revulsion it engendered when Sensation came to town in 1999? And what has changed since then?

The New Museum’s Massimiliano Gioni, who has curated the Ofili exhibition recounted, “Because the first time around it caused a hysteria that had nothing to do with the painting in the first place,” they decided to bring it back.

But if the painting wasn’t the problem, then what was?

“There are different possible interpretations,” Gioni continues, “but perhaps the actual elephant in the room was that the Virgin Mary was depicted as a Black woman, la mère noire as opposed to the Western tradition of a la mère blanche. That is what made conservative critics most uncomfortable.”

Shock of the few?

This time around, Gioni points out, the painting is seen in the wider context of Ofili’s career: “To answer your question about what has changed, one thing we tried to do differently was show the painting with 11 other works from the same period. So it’s less of a UFO and more part of a body of work that offers a complex reflection on the role of images in both creating and criticising heroes and deities.

What emerges is that Chris Ofili didn’t wake up one morning and say, ‘Oh, I’ll paint a blasphemous picture to piss people off.’ No. It’s part of a much wider reflection on religious paintings – especially paintings that have always throughout the growth of the first Christian Churches, portrayed the first Madonnas as Black women – African women – with all the voluptuousness that comes within the context of today’s proscribed sexiness in African or Black cultural exhibitions. That makes a huge difference.” He pauses. “Fortunately after 15 years we can look at that painting less for its provocativeness amongst white people and more for its accomplishments in telling a more holistic story of the Holy Virgin Mary.”

I wonder, though, whether the power of the painting is diminished if people no longer consider it transgressive. After all, one of the strengths of modern art used to be its knack for challenging bourgeois values, especially when the bourgeoisie indulged in falsifying history for parochial gains.

As Picasso once put it, “Art is something subversive… If art is ever given the keys to the city, it will be because it’s been so watered down, rendered so impotent, that it’s not worth fighting for.” With the exhibition at the New Museum, in a sense The Holy Virgin Mary is back and has been given the keys to New York City.

Still, maybe something else is going on as well. Ofili belongs to a generation of artists that emerged in the 1990s who were not afraid of the truth and often attracted controversy in the white bourgeois controlled media. Yet contemporary artists these days are much less likely to cause a stink in the news. Perhaps art has lost its capacity to shock?

“If I were to say I want art to be loud and media-friendly forever, I would be lying,” he says. The beauty of art is its continuous renewal. Maybe this is the ultimate renewal of the Holy Virgin Mary: that the very definition of art will constantly be renegotiated. That is what pisses some people off, because it makes art almost impossible to define in our own terms.

Ofili moved from London and now lives in Trinidad because “it felt like I’d be moving right into the heart of my subject. The things that I see now that interest me are right there and so close, like sitting in the first row of a cinema.”