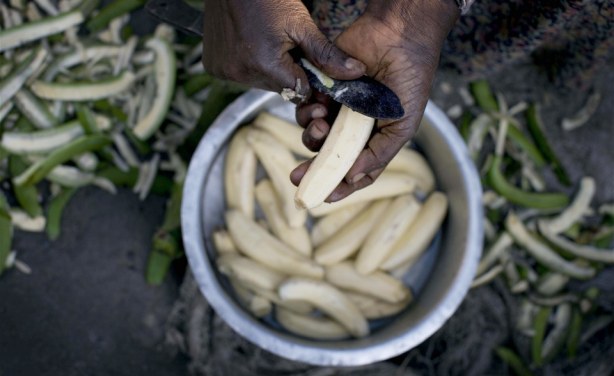 Each year, governments, journalists, development experts and others look forward to the United Nations Development Programme’s Human Development Report. The report includes a ranking of countries based on life expectancy, literacy, quality of life and so on. Once it is released, governments and citizens of countries with high rankings immediately trumpet their achievements. Those with lower rankings, such as the Democratic Republic of the Congo, which was last in 2013 in Africa, come in for criticism.

When UNDP announced it would launch its first-ever Africa Human Development Report in 2012, many expected that it would also include a general country ranking. Instead, the regional report focused on the theme “Towards a food secure future,” with extensive analyses and recommendations on that topic. If the intention of the 190-page report was to generate debate on filling empty stomachs in Africa with nutritious food, that goal was accomplished, probably in step with expectations.

Helen Clark, UNDP administrator, and Tegegnework Gettu, then director of the Programme’s Africa bureau, set the tone in the opening pages of the report. Ms. Clark writes: “It is my hope that this first Africa Human Development Report will energize a debate on how to strengthen food security… and lead to more decisive action.”

Mr. Gettu’s preface is a provocative clarion call to African leaders. “Africa is not fated to starve,” he writes. “That is an affront to both its dignity and its potential…. Africa must stop begging for food…. Had the African governments over the last 30 years met their people’s aspirations, the report would not be necessary. One quarter of the people in sub-Saharan Africa would not be undernourished, and one third of African children would not be stunted.”

Nigeria’s former President Olusegun Obasanjo echoed Mr. Gettu’s theme, saying that African leadership should be indicted in the area of food production. “It tells us what we know: that the poverty of Africa is the making of African leaders over the years.”

During Asia’s green revolution, for example, many Asian countries spent up to 20% of their budgets on agriculture, while African countries currently spend between 5 to 10% on the sector. This is despite African leaders’ commitment in 2003 to allocate at least 10% of national budgets to agriculture. At the moment, Africa spends more on the military than on agriculture.
Hunger amidst plenty

There is a harsh paradox of suffering amidst plenty of a continent with rich, arable land but unable to feed its citizens. “Hunger and malnutrition remain pervasive on a continent with ample agricultural endowments,” notes Mr. Gettu. “Africa has the knowledge, the technology, and the means to end hunger and insecurity.”

The worsening food situation dampens glowing reports on Africa’s fast-growing economies, which have expanded by an annual average of 5% to 6% during the past decade. However, notes Ms. Clark, “Impressive GDP growth rates in Africa have not translated into the elimination of hunger and malnutrition.”

Ms. Clark canvasses coordinated solutions. “Building a food-secure future for all Africans will only be achieved if efforts span the entire development agenda.” Without good roads, for example, surplus food cannot enter the market.

The right steps can be taken right away to stem the tide of food insecurity. Some of these steps are listed in the UNDP report: “Greater agricultural productivity of smallholder farmers more effective nutrition policies, especially for children greater community and household resilience to cope with shocks and wider popular participation and empowerment, especially of women and the rural poor.”

It appears that many African leaders agree with these steps. For example, Africa’s first elected female president, Ellen Johnson-Sirleaf of Liberia, considers the role of women in food security “profound and critical.” According to President Johnson-Sirleaf, better education and access to food assets such as land, capital and labour will likely increase productivity by 20%. Her position aligns with the report, which urges countries to “end decades of bias against agriculture and women,” because women’s education can lower malnutrition in children more than an increase in household income. Compared with other regions, African women have the least access to land.

Former Kenyan President Mwai Kibaki once linked nutritious food to mental and physical well-being, and added that “it also enables people to exercise their freedoms and capabilities in different fields.” Kenya is rated as a high-risk food-insecure country. During his time in office, President Kibaki said that a five-year drought had a huge negative impact on agriculture. Kenya’s agricultural sector has however been revived from a negative growth of 2.3% in 2009 to over 6.3%.

Analysts believe that agriculture is the main driver of the Kenyan economy, which the IMF projects will grow at 6.2% this year. Anders Ostman, a former head of the Swedish International Development Agency in Africa, advised Kenya and other African countries to pay more attention to agriculture. Kenyan President Uhuru Kenyatta said last year that his government would assist farmers to adopt modern farming technology that will bring about a “revolution” in agriculture.

However, Africa faces some headwinds in agricultural development. Opinion is unanimous that climate change will have a negative impact on agriculture. “Africa is most susceptible to variations in agro-climate,” according to the late Ethiopian Prime Minister Meles Zenawi, who noted that “climate change exacerbates the problem of food insecurity.” The semi-arid region from Senegal to Chad and the Horn of Africa, particularly Djibouti, Ethiopia, Kenya and Somalia, have all been affected by severe climate conditions, according to the Africa Human Development Report.

In addition to the impact of drought on food security, famines often also get the headlines, even though uneven access to food due to low incomes is as much a problem. “The silent crises of chronic malnourishment and seasonal hunger do not receive nearly enough attention,” notes the report. Increased agricultural production does not necessarily guarantee food security unless there are improvements in access to health, better roads, more job opportunities and empowerment of women.

Notwithstanding the deplorable food situation in sub-Saharan Africa, there are many bright spots, including Nigeria, where the government’s Agricultural Transformation Agenda is expected to ensure food sufficiency and create 3.5 million jobs by 2015. Ghana has already halved poverty by boosting cocoa farmers, becoming the first sub-Saharan country to achieve the first Millennium Development Goal, which is to reduce by half the proportion of people living in poverty and hunger by 2015.

Malawi undertook a huge seed and fertilizer subsidy programme and turned its food deficit into a 1.3 million tonne surplus in just two years. In Senegal child malnutrition was lowered from 34 to 20% between 1990 and 2005 through increased national agricultural budgets. By increasing agriculture’s budget from 1.6% in 2008 to 7.7% in 2009, Sierra Leone grew 784,000 tonnes of rice, above the domestic requirement of 550,000 tonnes.

As the continent posts world-beating economic growth rates, it needs to move faster to fill empty stomachs with nutritious food. Time will tell whether the current set of African leaders can achieve that goal.