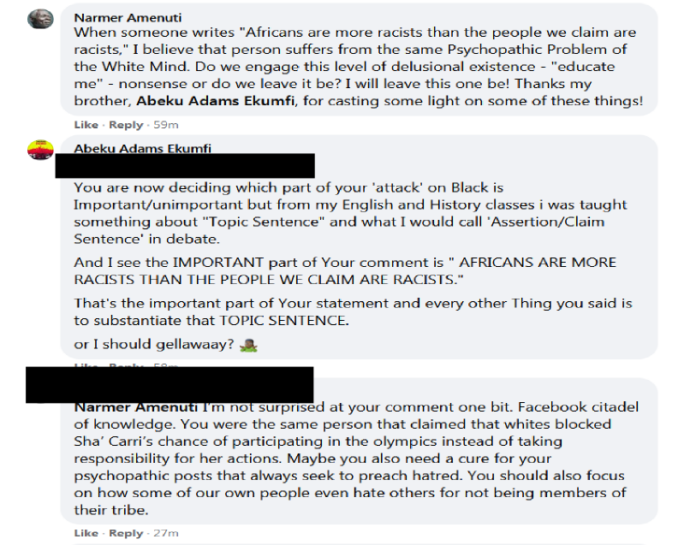 A few decades back, when I was still yet a little boy, we had some tens of thousands of acres of rain forests left around Ntoaboma. I am stupefied that children are growing up in Ntoaboma today, and the forests left are not the ones we grew up admiring.

For instance, back then, to get to my great grandmother’s ancestral village, we trekked some miles deep, we swam across lakes, rivers, climbed a mountain, scared away snakes, crocodiles, leopards and hyenas. One could not travel there alone, unless you were a trained hunter. Nowadays, all a teenager needs is a cheap, trashy, little bicycle made in China, and my great grandmother’s ancestral house will be in sight in a couple of hours.

Sacred things—sacred homes, sacred forests—have become tourist attractions. Ancestral homes have become old huts that have no place in the twenty-first century; and they must be torn down, often replaced with the eye-sore of cement-block monstrosities roofed with metal or plastic sheets. A “forest” meant something special, sacred, lovely, dangerous, forgiving and unforgiving, all at the same time.

When I travel somewhere and I see a little bush and someone refers to it this way, “Look at this forest,” I laugh. I am unable to control myself. A bush, is not a forest. The savannas of Ghana have bushes, not forests! And so words invoke a higher, deeper, meaning in those who actually understand them, in those who have actually lived them, and in those the word actually directly affects. For those who have yet to understand meaning, words are trivial objects, toys, to be manipulated as such—dropped, thrown, soaked, dried, painted and finally scrapped—like children do to a baby doll.

And so it is with the word, “Racism.”

Now, I recall that one time a cousin of mine visited us from Accra, the capital city in Ghana, and we took him over to my great grandmother’s ancestral home. That was scary, for we nearly lost him to a giant crocodile. For some reason this idiot thought these animals were pets! We needed to move my great grandfather’s long drum back to Ntoaboma. He had carved this drum out of a fallen tree from out of the same forest more than a hundred years prior. The drum was topped with the skin of a leopard that my great grandfather had tracked himself and killed for attempting to mess with his wife and children.

My cousin remarked, “I wish we had a car.”

Now, “car” means something. Yes, it is a giant machine that requires a driver, some fuel and maintenance, to roll from one point to the next. But a “car” means more than that, you see! It means stuff like, roads, gas stations, maintenance stations (fitting stations), all kinds of imported goods or trash, just to make one car work in this forest. “I wish we had a car.” Fine idea, nonetheless stupid!

And this is the point. The word “racism” means something more than just hatred, you see? It has a history, huge capital history that descends heavily on the mutilated bodies of millions of Black people over several generations. It has a geopolitical, socio-economic, socio-cultural, angle within the colonial and imperial oppression of Africans in Africa and in the diaspora. “Racism” means that all the stuff people enjoy in Europe and in the Americas, in Australia, in South Africa, and in the South America’s are predicated on the violence of European empires on African villages, on our ancestral homes!

And so when someone refers to my “criticism of imperial Europeans” who are focused on peddling unproven vaccines to Black people as if I am practicing “racism,” you can understand how this at first sight might seem laughable—like when the Ga-Adangbe man in Accra refers to his savanna as a forest. But more than just referring to the savanna as a forest, the idea of criticism of Europeans as racist reeks of gross stupidity, petulant ignorance and unparalleled idiocy.