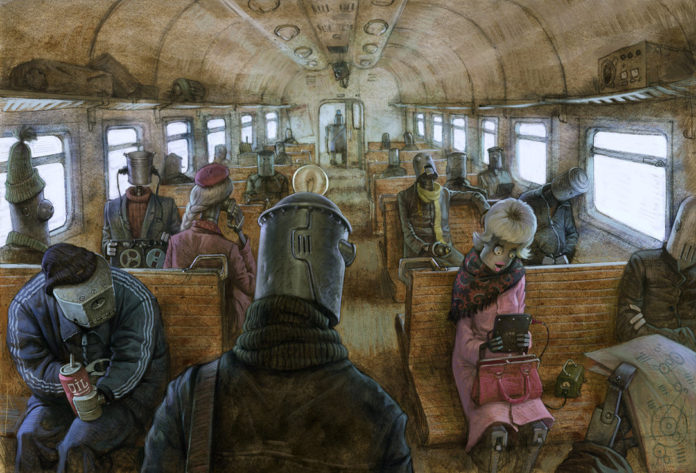 Imagine an Expansive Room full of Robots. A bell rings at 7 AM, on the dot, much like the clanging cymbal that summons people to prayer in a Catholic Village. Many robots stand up from their chairs, where destiny will confine them to sit for the next eleven hours (ad infinitum) to work for their daily bread. These robots had clocked-in at 6 AM and can only be expected to clock-out after 5 PM (an hour of re-fueling their batteries excluded). They obey.

In all, robots spend about seven hours away from the Expansive Room daily, if they can manage to stay awake until midnight. Two of these hours are actually spent traveling to and from the room. If they are lucky, robots get to spend about two to three hours with other robots or with those who care about them, or alone. The remainder of the hours in the day, robots spend to re-fuel for the next morning. At 5 AM they get up and begin their journey to the Expansive Room. Ad infinitum.

In the Expansive Room once the bell bellows, the robots stand still and bow-down their heads in prayer to their Creator. Some don’t stand for the prayer. Those who remain seated are glued to their wheeling task chairs. Wheeling and swiveling all day, with the obvious exception: That between 7 AM, on the dot, and 7:05, these chairs are frozen in place and in time as if they never actually moved, or as if they never actually swiveled.

The robots that remain seated also bow their heads in silent supplication to their Creator. Every robot maintains a rosary for reciting their prayers. When it is not in use, it is parked in the full glare of the world, where an incoming attacker, like Satan, can see them. It is hang from a red wall made especially for the rosary beads. (Satan is expected to make his decision about whether to monstrously attack a robot or cowardly escape to safety under the power of the beads of the rosary.)

The funny thing about beads, especially those on a string like in a rosary, is that it means two different things to robots when it is used. Actually, that’s the funny thing about robots. Beads on a string mean two exact opposite things to robots. In one instance, and this is obvious to the robot, they serve as protection from Satan. In another instance, when the women of non-robots wear these beads around their waists for some protection from evil, robots tend to believe that the beads are really Satanic. So, robots when they use beads to pray between 7 AM and 7:05 AM, on the dot, in the Expansive Room, believe that the beads are Godly, but when the women of non-robots actually wear the same beads around their waists for protection against mishap, the robots regard the beads as Satanic.

These are robots. After all. Which means that at 7:05 AM, on the dot, the spectacle of the solemn prayer quickly turns into the usual hustle and bustle of robots about their daily tasks and routines. They move in set patterns throughout the day, although within the four walls of the Expansive Room. They all have dedicated desks assigned to them, spaces from which they perform their duties. Some often meet to review each other’s performances. A few other robots, the chief priests, grade all robot performances, while their own performances remain tacked away to be graded by the Creator in the Afterlife. No, not exactly, robots do not believe in the Afterlife. They rather believe in The Creator’s Kingdom after death. Another way to put this is that robots believe in an After-Death, not an Afterlife.

The difference here—allowing for a brief introduction—is not insignificant. Robots believe that there’s a real possibility that they might take on new life forms in the Creator’s Kingdom. Some put their trust in their priests on the promise that they can become Angelic in the Creator’s Kingdom. Hence the death of the robot signifies the springing of new life in an Angelic being: the After-Death. More to this point, robots believe that one day all robots (and non-robots) will die. Nothing else will exist except for Angelic beings in the Creator’s new Kingdom.

Evidently, an Afterlife contradicts this idea, or belief. Non-robots believe in an Afterlife in which non-robots live on, in the same form, with their direct Ancestors, for eternity, but they will live in a world situated in a higher dimension: beyond the reach and the comprehension of the planetary world of matter. The old world of the non-robot is not destroyed or purged however—since matter cannot be destroyed nor created—as it would in a robotic sense. The old world continues to breed newer and newer non-robots, and some robots, for eternity as it lives in parallel with the Ancestral world.

As a result of this difference—between the Afterlife (for non-robots) and the After-Death (for robots)—robots expect a Judgment Day (the end of the world of matter), and non-robots do not. That is non-robots accept natural laws, while robots do not. So robots pray far more than non-robots in order that they can wish away matter, or wish into physical existence anti-matter.

So in the Expansive Room, robots partake in all sorts of rituals. At meetings, robots insist that a prayer be said at the beginning to invite the Creator into their midst. “It helps the meetings run smoothly,” they claim. And of course, all robots believe that a few recitations on the rosary at the start of a meeting makes a difference. Perhaps it does, perhaps it does not, but robots will never care to find out. (Their Wishes cannot be explored or examined.) Upon a lengthy observation of robots in the Expansive Room, what exactly these robots accomplish day in and day out one cannot tell until one is able to escape the imagination of the expansive room where robots drudge along.

What one finds outside, looking in, is a financial bank. And upon further zooming out, one finds a robot village. When one focuses on the adjacent building that houses several other robots, one finds a hospital that treats other robots, and some non-robots—who have been left with nowhere else to go as a result of the robotic invasion of their town. On and on, as one peruses the neighborhood of the Expansive Building in which the Expansive Room is located, and in which robots skivvy about, one business enterprise after another fills the vast expanse of the space outside. One begins to wish, much like a robot does about the Creator’s Kingdom: to move higher and higher and see bigger and bigger. But one quickly realizes that there’s no more hyper-space to escape into: one cannot escape the outside to a bigger outside. One is caught within a deep web, a matrix of prayerful robots going about their duties.

Well, these are robots after all. They spend too much time trudging along: reporting to work at 6 AM, and leaving no earlier than 5 PM, and they spend the rest of the time pleasing the Creator and his Cheerleaders so much so that they can barely be expected to take a minute out of their day to find out if anti-matter exists, and if matter (the stuff of which they are made) behaves in particular ways. For this reason robots simply refuse to use cognition, they have severed the link between their souls and the minds—they are spiritually lobotomized. That is possibly why prayer (or wishes), has become to the robots a chore, to be performed at specific times and at specific places in order to ensure a re-fueling that is daily drained by their own robotization.

Robots are more educated than their Ancestors—the non-robots from which they have been carved—but they lack cognition. They are the More Educated Than His Ancestors (The Metha), and they remain robots for no other purpose but to wish for an After-Death, where they can no longer be bothered to live, after all. Robots are dead, and for this reason they hate to live. They hate life. And so are The Metha. They refuse to live. They hate life, but they can all say a prayer with a rosary.