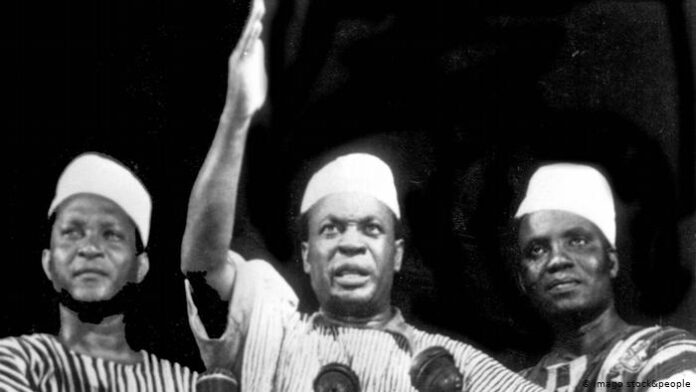 I am not a disciple of Kwame Nkrumah, the first Head of the State of the balkanized country called Ghana. I am just a fan. Which means that I don’t adore the memory of the man, but I like him. I like him more than any other Head of State thus far.

In the past few decades, since 2001, after the nearly twenty-year reign of the military man, J.J. Rawlings—which was made only possible because he is, in fact, half-Scottish—much soul-searching occurred in the country. This is simply because not very much has been achieved as a nation since the Euro-American Empire engineered, funded, planned and oversaw the overthrow of Kwame Nkrumah.

There’s no other way to imagine what Ghana would have become under the leadership of Kwame Nkrumah, but to accept that it would have been at least one hundred years ahead of the sorry state of affairs that the country finds itself in today. Ghana’s leadership today, led by Nana Akufo-Addo, a man who cannot produce a copy of the certificate of his own asserted-education in his beloved England, is by all accounts, a dwarf both in spirit, in leadership and in actual intelligence.

To say what I say about Nana Akufo-Addo is not to belittle the man today (although very little can, in fact, be said of him), but rather to show the kind of super-human personality that Kwame Nkrumah embodied. For instance, there’s absolutely no way that Kwame Nkrumah, or even the notorious white-man, J.J. Rawlings, would have refused to show a copy of the European certification over which he boasts.

In addition, there’s certainly no way in God’s name that even Gen. Afrifa—the man who shot his own friend-in-crime, Gen. Kotoka, in the back for helping him overthrow Kwame Nkrumah—would have broken ground to build a Roman Catholic Shrine in Ghana, using tax payers moneys to import sand, cement and stones from the German State of Israel.

You examine the lives of those who came after Kwame Nkrumah, and very little, if anything, can be written of their resolve, their will, their appearance and more specifically very little can be said, let alone written, of their level of intelligence. To say these things about all those who came after Nkrumah is not to belittle these men, but to present the fine case that Kwame Nkrumah was indeed the man chosen by the people of Ghana—a people even of a European balkanized colonial state.

Kwame Nkrumah was a pioneer for African liberation. And by that what I mean is that Nkrumah understood that he was the leader of Ghana, an African state, and not a student or a stooge of a wounded, and retreating British Empire. Nkrumah knew that it was only a matter of time before Britain crumbled and his actions were to situate the tiny country of Ghana to take full advantage of the situation and finally break away for dear freedom.

Which is my point. His overthrew ensured that Ghana, and for that matter Africa never truly broke off the shackles of the four hundred years of European Terrorism on the continent.  And for decades the disciples of Kwame Nkrumah have torn our ears, literally apart, about the nature of the crime we have all committed for either overthrowing Kwame Nkrumah or allowing Kwame Nkrumah to be overthrown.

We are like prisoners in the dungeon of Euro-American Terrorism, who once tried to break free, under the astute leadership of Kwame Nkrumah, but whose leader was shot, and the whole idea of the prison break was thrown into total and complete disarray. We find ourselves in the bottom of this Euro-American dungeon, with tears, with gun-shot wounds, with legs broken and amputated, with our dead warriors and our dead traitors, with are living but emaciated warriors; we find ourselves with our traitors, dead and alive, in the bottom of this Euro-American dungeon, with little water, little food, yet we bicker profusely about who the enemy is.

What fools that we are!

Our enemy is the dungeon, not anyone in it. Our enemy is the man who built this dungeon, who maintains this dungeon, and who daily profits from keeping us in this dungeon. Our enemy produces our traitors, dead and alive; our enemy trains and funds our traitors, dead and alive. Our enemy is like the serial killer, who lurks in the shadows and stalks at noonday, and he laughs at us while we bicker, and point the finger. The serial killer knows, as we should also know that this is all in vain. For the only way out of this dungeon is to find another Kwame Nkrumah, as fast as we can, an even better one. Another Kwame Nkrumah will come from nowhere but from within, and so finger-pointing cannot become our daily job. Our goal should only entail our unfettered objectivity about who should lead us to once again take up the new fight to break free from this horrific dungeon.