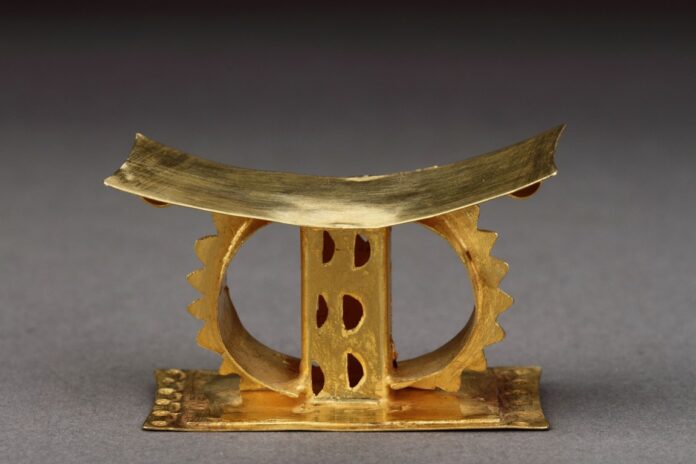 The Possessed. They Eat Their Ideals. And Have More Ideas.

Scholars from the west and their students here in Africa tell us about many things: Democracy, Capitalism, Socialism, Communism, Freedom, Liberty, Rights, Human Rights… and so on. What we do in Traditional Africa is to listen carefully.

It doesn’t end there. The scholars of the west and their students here in Africa then turn their focus on Africa, and straightforwardly, they claim, and they have declared this in the past hundred years, while pointing fingers at our foreheads: “You, Africa,” they say, “are backwards, and primitive. You are not like us. We are the best version of you!”

Consequently, where they see Goldsmiths in the seventeenth century turning dust into Golden Stools in the State of Bono, these European scholars do not accept that Africa is more advanced in the field of Metallurgy than their “modern” European societies. Rather, what they proceed to do – after they have stolen the intellectual property and passed it on to their “modern” industries in Europe – is claim that African methods are primitive and that European methods, are by far, more advanced.

Traditional Africans observe this European attitude towards Africa and they proceed to critique the very notion of Rights, Property Rights, Human Rights, and so on, which these Europeans so carefully espouse. In the face of such critiques, these Eurocentric scholars then proceed to claim that at the time that such intellectual property, as metallurgical technologies, were stolen from the Bono People of West Africa, there were no such laws protecting property/intellectual rights.

The same tactic is used by European scholars to explain away the critique against Europe’s carefully detailed gross inhumanity towards Africans for the past three hundred or so years. “Why,” the Traditional African inquires, “if Europeans come from such high societies did they engage in the Human Trafficking of people from West Africa to the Americas and why did they insist on enslaving whole peoples for hundreds of years for their peculiar material profit and unspeakable sexual deviance?”

Their answer? European scholars and some of their African students (either because they are Ignorant or Stupid) impose yet again the same idea that while their inhumanity towards Africa developed and intensified, there were no such laws protecting the Human/Property Rights of Africans. Simply put, they claim Africans were not considered Human Beings back then!

This line of paralogical reasoning continues to be the rational for inhumanity by people who claim they have descended from higher, better, more advanced and more modern societies of Europe. This kind of explaining away their plunder of Africa and their inhumanity towards Africa, for nothing but for their insatiable material and sexual appetites, has become the gold standard in order to shirk their responsibility and consequences for all their heinous crimes against Africans.

What remains is this: Europeans are always correct. This is the European Law. When they steal and loot resources from others, they are justified. When they kill other people for absolutely no reason, but for their material and sexual gluttony, they feared for their lives. When they enslaved so many people for so many hundreds of years, it is because back then, according to their own reading, they were justified by (their) laws!

It is not that all the European academic machinations such as Property/Human Rights, Democracy, Freedom, Capitalism, Feminazism, Liberty, Sovereignty, are not patently rosy ideals with virtually no practical evidence or demonstration in any European society. It is not even that those of us in Traditional Africa have not been the progenitors and masters of these very ideas long before Europe emerged from the Hell of their Middle Ages—for we taught the world some of this stuff.

It is simply that the very Europeans who espouse these ideas are full of shit. They are possessed. It is simply that these ideals are set and echoed by European scholars and their unsuspecting African students to dissuade the attention and curiosity of the large masses of Africans from the material and sexual deviance of western interests in Africa.