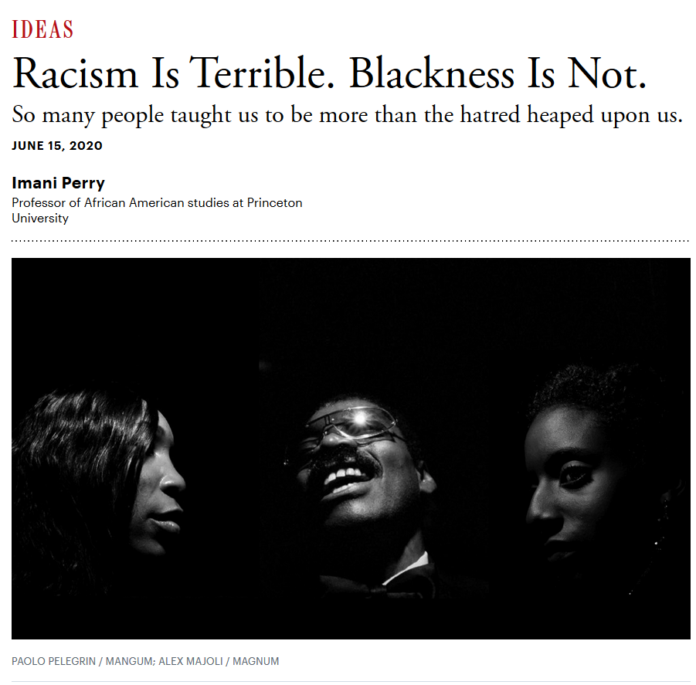 The most idiotic aspect of most, if not all, Black scholarship about Blackness inside America’s Ivory Towers is that it is devoid of the idea of consistent thinking. What one would call, an ideology. And for that matter, this is why the White Towers love it so much that the white elites parade it in their coveted journals to: (1) mock the idea of Blackness itself and (2) to portray Black scholarship about Blackness as insipid, ineffectual and milquetoast.

Take the headline shown in the image above, “Racism is terrible. Blackness is not,” which appeared in The Atlantic, a white mass media outfit that purports to enlist Black writers to inform their mostly white readers about Blackness, but which in actual fact serves as a breeding ground, a platform, to test inane Black activism.

Why would any headline say: “Killing is terrible. Humans are not?” How would such a headline make any sense to any reader? Clearly the two parts of the same idea do not logically follow. At first thought it is jarring, and it just doesn’t make sense, until one begins to peel away the racialized context within which the working white educated class are being filled in, and being given, a daily communion of their beloved white supremacism.

Who else but a Black professor, a preacher firmly rooted in the things of whiteness; a preacher strongly rooted in the Ivory Tower, to dish out that communion with her bare innocent hands. And so the title, “Racism is terrible. Blackness is not,” is not just innocent and childish, it serves the particular purpose for which The Atlantic exists–to feed and pacify the congregation of white supremacists that “Blackness is [after all] not [that terrible].”

Language is not just about what you mean. It is about how you think. When someone says, “I am not stupid.” You have to assume that they are responding to another person who called them stupid (or to someone who implied it)! One does not use a negation of a negative word to paint something for what it actually is, else you must simply just say, “I am intelligent.” Else, you must simply just write that “Blackness is amazing.”

The figure of speech, of negating a negative (a double negative), in this sense, is employed only to defend what one feels is a defamation. Hence, the title: “Blackness is not [terrible]” shows that the writer feels the need to defend her Blackness, and that of others, from a certain defamation. One wonders what the defamation might entail and why a rational person should entertain white supremacist nonsense at that? It is as if to say that a human being feels the need to justify her humanity to other human beings, without which she doesn’t feel human.

More, why bind Blackness and “terrible” together in the same breathe? Who is she responding to? White people? Take the following attempt to clarify my point: Let’s say you are Christian, and I write you a letter with the heading: “Jesus is not terrible.” Any thinking person would wonder why on earth I would even begin to think that Jesus needs defending! To whom am I responding? Christians? Atheists?

Furthermore, say you are Ewe, and I write to say, “Ewes are not terrible.” All thinking Ewes would raise an eyebrow or two about why on earth I would even begin to assume that Ewes need to be defended in that way! To whom should Ewes defend themselves? To the world? Why?

One more example and perhaps my point can become a bit clearer. Say a paper writes a heading like this: “Black people are not terrible.” To whom are they defending Black people? To white people? To the Russians, to the Chinese? What at all is the point of such phrasing?

Some may think this point insignificant, but such writing, such headlining, reveal something very significant about the psyche of those who pen them: (1) they are ignorant, (2) they are mis-educated (3) they are grossly stupid, and the editors who allow such phrases are deeply sick. They are racists!