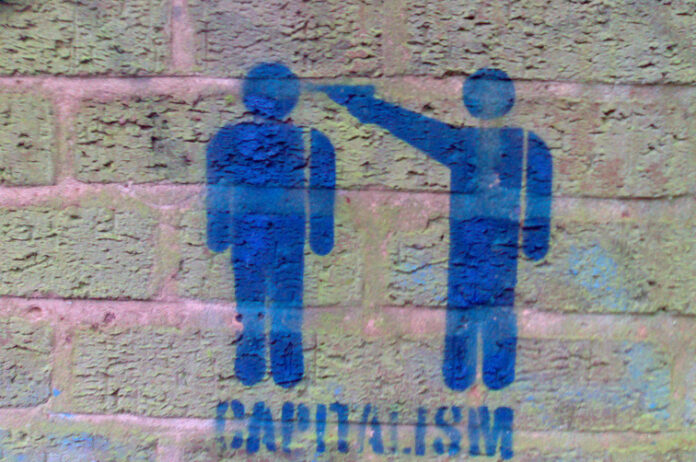 What the Capitalist Wants from Women.

Capitalists need women. Mainly because their technology has not led them to a new age where women no longer need to give birth but babies can be born in test tubes or nurtured in incubators. So capitalists need women in order to produce more bodies to perform their labor. Women are essential, but only insofar as their reproductive capabilities cannot be replaced.

But to a capitalist, the woman’s body is not for reproduction and posterity alone. No, outside of this activity, which should be practiced sparingly, a woman’s body should be a man’s body: hard, contoured, and built for work. Women should strap down those boobs, plug that monthly leak, or better yet take a pill to subside it, and get to work. The same work as a man, the same length as a man, but for less pay, because those margins have to come from somewhere.

Feminism, therefore, is the capitalist’s utopian fantasy. The tool to achieve a lofty goal. Feminists are Women and Men who embrace the capitalist’s ideals without him having to deliver the punchline. Women who desire the jobs of men and who aim to out-perform them, or at least profess that they could, twice as better. Women who shun maternity leave. Women who believe equality means wearing the pants and being the breadwinner. The capitalists loves these women. But not so much that he wants to date them. Then, they would not have time to work.

Feminism is doubly beneficial for the capitalist. He has more labor in the marketplace. He doubles his profits. But more, he triples and quadruples them. Women at work means that women are spending more money on things they would otherwise do at home. Women are buying food outside of the home. Women are buying everything outside of the home. For working women, the home becomes nothing more than a resting pad for evenings and weekends: a feel-good movie for mindless entertainment, a long, hot shower for cleansing the day’s work for the capitalist’s soul. For the enlightened, maybe a book purchased from an online vendor. While the home is a temporary solace, the workplace becomes the central heart and hearth of life.

The home is no longer where communion happens. The children, if there are any, spend more time at school than at home. And so, too, do the parents. If the children are lucky, they will eat more than what comes out of cardboard boxes and plastic and styrofoam containers. But the capitalists notes, in his world of course, that the majority of children are lucky to have any food to eat at all, which becomes ever apparent at the notion of an impromptu school closing.

It turns out that most of these jobs that women take leave them unable to fend for themselves or for their children. Women happen to be less secure than ever under the capitalist’s watch. The job, the independence, the dream promised to the feminist women fits much differently than the reality. Women might work harder than ever, around the clock, but still live precariously from paycheck to paycheck.

This tenuous existence is by design. But not because the capitalist believes he has left no stone unturned, but because he is quick to recalibrate when such a stone is pointed out to him. Women’s work, like men’s work, is no shining achievement with concluding ceremony of completion. Women must continue to work, and not opt out, to be of any use to the capitalist. And thus, women are strung along, the prize ever-dangling just centimeters away, but still unreachable. The workplace brings women no closure and ultimate satisfaction, but an endless desire to accomplish more, to be promoted higher and higher. The capitalist aims to stretch women’s bodies just as tautly as men’s bodies, and even more since women generally have a longer life expectancy.

To be sure, this way of life is not a burden to everyone. Childless (or as they like to say it gleefully, “childfree”) women, women with no spouses (or no desire to have a spouse), or women who live alone often who find ample meaning in those mazes the capitalists have set before them. Even women living with children and spouses can get caught up enjoying the maze, the adrenaline from its twists and turns, its deadlines and late nights, its pay raises and surprise bonuses. The capitalist’s workplace is a game, which at one point or another, can have us all hooked.

Absolutely, there is nothing wrong with finding immense pleasure in jumping over hurdles placed by capitalists for their own gain. Further, our life’s choices are hardly to be criticized by people who have no understanding of the paths that have led them there. One person’s motivation to work in a place of gainful employment could stem from childhood instability, or trauma. There is no place to judge. Though no matter the reason, our societal adherence to the mores of the capitalist leaves us with no room to live, truly, either.

The capitalist’s place and desire for women might fulfill the mental, emotional, or psychological yearnings of some women; but most women cannot and will not find their life’s meaning and purpose in some for-profit-factory known as the modern workplace. Rather than embracing what the capitalist wants for African women, it is our duty as African women to ask, after our morning porridge, what we want for ourselves. And to go get it for ourselves. With as much verve and fervor.