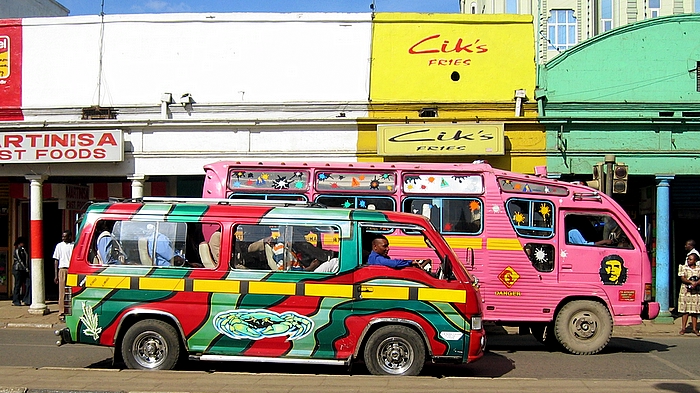 NAIROBI, Kenya — In support of Google’s taking over of Kenya’s Minibus transit system, the New York Times had to find a matatu named ‘Hitler’ to make their point. They write:

“On the gritty streets of this capital city, the battle for Kenya’s future may come down to Hitler versus Google.”

The owner of ‘Hitler’, a matatu, electric raspberry in color, one of the thousands of minibuses that serve as Nairobi’s subway system is one of many, and one of the sweeping majority of minibus owners against the taking over of an African business by a white company from the US.

Alas why can’t white people just leave the rest of the world alone?

Who said we needed Google, which by the way also has a funny name? Google has been pushing a little green transit card that will replace cash payments and track every transaction on the minibuses in Kenya.

Google claims that this will make it much harder to bribe police officers and much easier for the government to capture millions of dollars in taxes.

Who are they kidding. By tracking, does Google imply all of Kenya, their daily transit routes, the individual activities and freedoms they enjoy will now be Google’s to mine and hand over to the nefarious CIA and the US NSA? Who are they kidding?

We all know the owner of ‘Hitler’ meant no offense to the West’s Jews in naming his bus after a genocidal maniac. He simply liked what he called “those funny, funny names.”

“Hitler has been misbehaving lately, refusing to adopt a new technology that could revolutionize one of East Africa’s most lawless and lucrative cash-based industries.”

How insidous? How lowly are these white people from the US and abroad to want to do whatever they please in Kenya, or any part of Africa? So are resources are not free enough for America? Now they want everything else we have? Where does this end?

Google claims they have made substantial investment and the Kenyan government gave a deadline for all matatus to go cashless by July 1. I know ‘Hitler’ has not gone cashless! Someone has to stand up to these slave-owners from the US! ‘Hitler’ is not alone, in fact it is the norm, not the exception.

How the New York Times continues to insult all matatus who refuse to badge under a Google slave deal!

“Google’s little green card has incited strong resistance, with the vast majority of Kenya’s matatus still dealing in their preferred currency — grubby bills — as they zoom around Nairobi’s streets stuffed with passengers, flitting in and out of traffic like a bunch of fleas on methamphetamines.”

We know that Google is not giving up, but why is Google so interested in the so-called ‘Kenyan unruly matatu trade’?

The Jewish idiot, JEFFREY GETTLEMAN, who wrote the piece on the New York Times carefully made sure the article did not host any comments. Otherwise he would have received one from me. It wouldn’t have been pleasant.

The New York Times has struck a low blow on our dignity as Africans, insulting us at will in the article by Jeffery Gettleman. It is heinous and The New Times stance for Google’s feeling of entitlement in Africa, and to African business is stupefying, silly and above all dehumanizing. Africans can and have gone digital on their own. A striking example, which no one doubts is Rwanda! Even then, the Jewish idiot in Jeffrey Gettleman is quick to turn on Rwanda describing it in dehumanizing language.

“Rwanda has invested heavily in high-speed Internet even though most Rwandans are still peasants swinging muddy hoes. In the Democratic Republic of Congo, women sell $500 iPhones from little kiosks lit by stubby candles.”

If Jeffrey Gettleman’s article is not an attack on our of life as Kenyans and as Africans then I do not know what else can be. The Gettleman article is filled with insults and aspersions on Kenyan life that I hope Gettleman goes to sleep and never wakes up!

Jeffrey Gettleman and the rest of his racist entourage need to understand that Kenya, and for that matter any African country is rich without their constant interference!

We are not poor countries; we may make an average of about $5 a day but we are also a world leader in mobile money transfers. We did that by ourselves, not with Google’s help and certainly notwithstanding the Jewish paper that the New York Times is. We in Kenya boast one of the highest rates of Internet usage in the world. Some matatus even have Wi-Fi.

When Libya tried to carve out Africa’s own internet, so we don’t rely on the US or Europe, Muamar al-Qaddafi was killed with American and European help. We have come to know what world we live in – a world continuously terrified by America’s terror unless you become their slaves.

You claim Google wants to help Kenyan get rid of corruption an the kitu kidogo. Well why don’t you start by stopping African leaders from storing our money in your banks! Your logic never makes any sense. It never did, but we are not as boisterous as you so we let you have your cake.

Hitler’s owners name is Joram Kamau and his not going to be a slave to Google’s green card. As for the name of his bus, Joram should does not need any awareness of the atrocities orchestrated by Adolf Hitler when white people continue to oppress Africans everywhere. It is not something we focus on in Kenyan schools. What do we care?