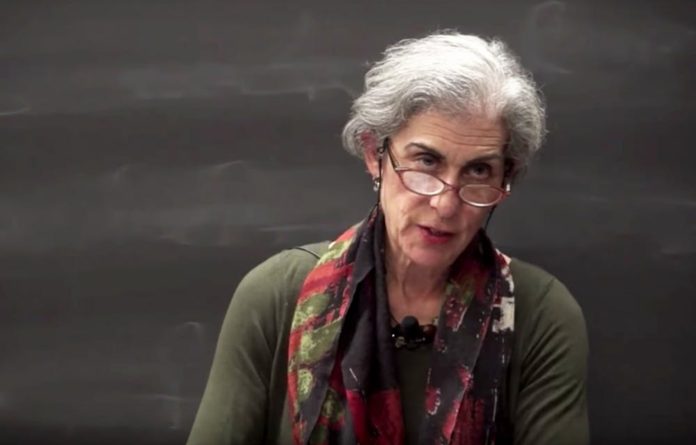 Amy Wax is the epitome of western academic achievement. A very fine sample. After all, she attended public schools for her elementary education, and she topped it all up with several Ivy League degrees from Yale to Oxford, and from Harvard to Columbia University. Amy Wax is every white American’s dream. After all, Amy’s Jewish parents emigrated from Eastern Europe (the greatest continent on the globe—according to Amy). Amy accomplished everything that her immigrant Jewish parents in America dreamed of: She assimilated well, became white, all in one single generation, and enjoyed the privileges of whiteness built on the sweat and blood of those she disgustingly refers to as the “bête noire, race” (the Black beasts).

What is more? Amy is a full law professor at another Ivy League school, the University of Pennsylvania (UPENN), founded in Philadelphia (the City of Brotherly Love) by one of America’s greatest thinkers, Benjamin Franklin—in fact, America’s only great thinker! As thinking goes, Amy is the very sample of an American education that goes to show that founders, even the great thinking founders of good schools, have no influence on their own schools after they die! As parodies reflect, Amy works out of a school built by a man who believed that the idea of the “bête noire, race” necessary for the violent enslavement and barbarous exploitation of kidnapped Africans for the sole purpose of the primitive accumulation of wealth in the hands of a European elite in America was itself (humanly) wrong.

That is, Mr. Benjamin Franklin (who was also known as an electrician, now called “scientist”) espoused repentance/salvation for slave raiders, kidnappers and plantation masters, and he believed that the only beasts roaming the fields and preventing the colonies of America from realizing a civilizational dream were white, not black. America’s stunted growth was due to white oppressors of Blacks, not the other way around. Amy, now a professor at Benjamin’s school, disagrees with Benjamin. Amy believes that the beasts rampaging the fields are Black people (what she calls “the bete noire, race”) and what’s more—these beasts don’t even need salvation. According to Amy, the white fields need saving from the “bête noire, race.” Thus, the Civil War idea, the Reconstruction imagination and the Civil Rights dreams of imagining the United States of America as a melting-pot is lost on the wet-dreams of Benjamin Franklin. What Amy wants is an America of a pure white race (of which the German-Eastern-European Jews are a central part), free from the (moral) confines and (human) contradictions of the presence of “the bete noire, race.”

To put Amy’s thinking into perspective, here’s what Amy said about immigration and race (via Vox’s Zack Beauchamp, with the most controversial elements highlighted):

When Amy Wax speaks of a “fear” that “leads conservative to avoid talking about cultural distance, or questioning the happy fantasy of magic dirt,” Amy stokes centuries old doctrines of Eurocentrism: Which is that, it is only outside of Europe that “backwards states” emerged; and it is only inside of Europe that “successful ones” evolved. Amy’s thinking, no matter how repulsive and unfounded, is clear: Amy believes that Black people came from “backward states” and whites (including all her Jewish sistren and brethren) came from “successful ones.” It is in this light that Amy couches her U.S. Immigration political thinking of the current American regime: Non-white immigrants are coming from backward nations to the more successful U.S. Further, Amy believes that people only move from “backward states” to “successful ones.” Now you ask—why did Amy’s parents immigrate to the United States if white people everywhere (like her Jewish parents) build “successful” states everywhere?

Paradoxes often expose paralogisms. Amy Wax might be a fine specimen of the west’s Ivy League Law education, but Amy fails in the correct application of common sense. Amy’s other idea of “cultural distance” is equally stupefying. By cultural distance, what Amy is espousing is the idea of “otherizing;” the idea of maintaining America’s white protestant ethic as culture—which she claims has been inherited from old Europe—from any adulteration by immigrant cultures. That is to say that, for instance, Africa’s Musical Civilization of the Americas (Soul, Soul cuisine, Country music, Hip-hop, Rap, etc.), because it was forged by “the bete noire, race,” must be maintained separate from America’s white/European cultural identity, if not better wiped out. Although when Amy is properly examined, Amy herself is Jewish; Amy herself is the very antithesis of maintaining a pure European culture in America. Amy is the very representation of people who maintain a foreign culture, a Semitic culture at that (as Judaism is not indigenous to Amy’s great continent of Europe), and refuse to excise that culture to adopt to European cultural ideals. Amy’s Jewishness must jump at her as the representation of the very cultural distancing, she speaks of, from Europeanness.

The reason why Amy’s Jewishness does not jump at her as cultural distancing, but everything else that is not white is—like being African or Mexican or Muslim—is simply because Amy views Jewishness the same way that the rest of Europe and white Americans view Christianity: It must have been formerly black (and Hebrew, a very long time ago), but now it is white and European! Amy views Jewishness in the same manner as her fellow whites view Christianity and in the same way that many white Americans now view Country Music: It must have been an African invention in America, but now it is white, because we said so!

Hence to understand western academic achievement is to understand its products like Amy Wax. To better understand the philosophy of western academia is to examine its fine samples such as Amy Wax. Therein lies the very definition of Western Academia: The most anti-Black institution ever erected in the history of man to glorify nothing but unfettered mediocrity, depressing insecurity and utter violence.

The reason why the U.S. federal and state governments are adamant about their stance on reparative justice in America, and the reason why the Black family has been so vilified in American film, academic research and public policy, is simply because of the so-called “fine minds” like Amy Wax. The U.S. federal government and state officials were never ready to address reparative justice as a solution to a problem in America. Rather, the U.S. government views the “Negro family” as a “culturally distant” problem in America that needs one solution: culling, no matter what, since the Negro family (according to the doctrines of Amy’s cultural distances, or whiteness) no longer needs to exist in a slave-plantation-free America.

Therefore, all the window dressing of Reconstruction, Integration, Civil Rights, and of color-blind America, all go to shroud the true impact of what all of American public state and federal policy, written and maintained by the likes of Amy Wax, in the twentieth and twenty-first centuries, are meant and tailored to achieve—the significant culling of the Black family through vilifying Black people as “the bete noire, race” in the media daily, through mass incarceration, through throwing Black children into no-return-correctional facilities, through socioeconomic deprivation, and literally through police violence in America. White America’s goal (since the federal government is essentially made up of Caucasians like Amy Wax, and not Benjamin Franklin) is not the desire to repair the past (for this is just what it wants the rest of the world to believe), but the proclivity to wipe out all evidence of the past: to wipe out the Black family.

If the University of Pennsylvania were serious about fashioning itself in the image of Benjamin Franklin, it would fire Amy Wax today. (However, I cannot expect Amy Gutman, the president of the school, who is also a white American Jew to do that. American nepotism is as real as its anti-Blackness!). Amy Wax’s views cannot possible be reconciled with the views of the founder! But UPENN is not such a school. Never has it been. Pegged in the prime location of West Philadelphia (home of many proud African Americans) UPENN is arguably one of the most anti-Black western institutions that the world has ever known. One day, when everything about the founder is forgotten, and rewritten in the image of whiteness and Jewishness, UPENN too will become poor. It is already mediocre!