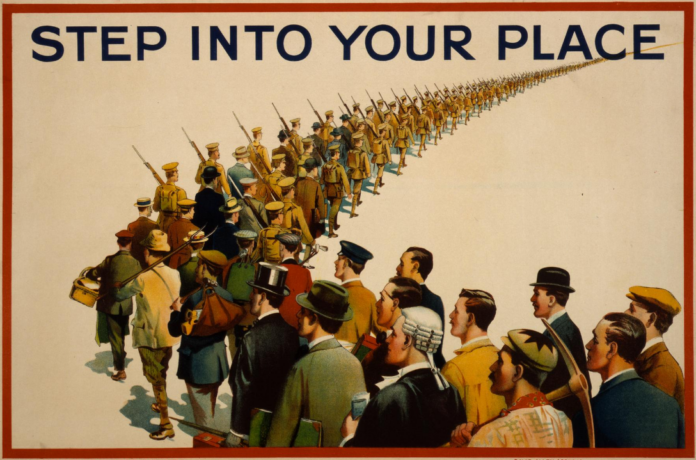 They Teach Our Men That Violence is Bad?

This 1915 poster (below image), published in London for the Parliamentary Recruiting Committee setup to recruit soldiers for Europe’s First Tribal War (aka WWI), shows a column of soldiers marching into the distance, while being joined in the foreground by men in civilian attire representing a variety of occupations and social classes.

How do you build a modern state? That is how! This is exactly how! The rest is window-dressing. Love it or hate it. Or, you can choose to be quenched by another group’s army.

Before the books and before they have made students of their books in your land, they have already launched violent war against you. This is true, just take a cursory look around Africa. The students/proponents of anything European/American in Africa are backed by the same colonial patriarchal military forces of yesteryear. Even their feminism is backed/supported by just that!

And so, bury your heads in the sands and lie to yourselves all you want about how that or that is a battle of ideas. Yeah right! A battle of ideas with guns pointed at our temples. Sure.

They are teaching our men that violence is bad? How do you think the lioness and her cubs eat? By being friendly?