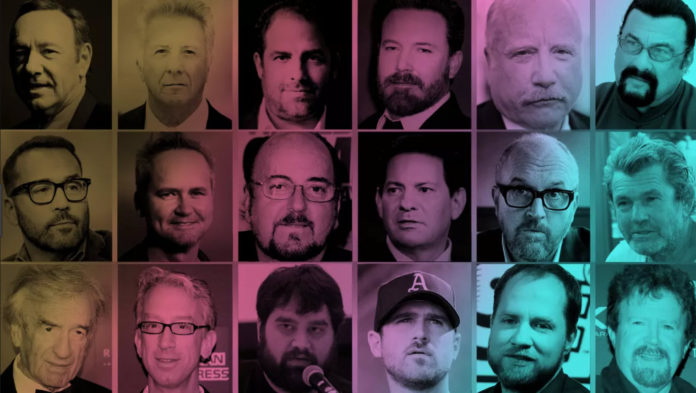 The US Mass Indoctrination Media (USMIM) is struggling to find naughty Black men to replace the white-male face of child sex trafficking, pedophilia and sexual harassment, so prevalent in American society.

For so long, in fact, since slave plantation era, the US media has painted the image of the Black man in America as a beast looking to ensnare and rape the “precious” white woman. America’s first major film production made clear this propaganda in Birth of a Nation (1915), which was screened before the president and his cabinet at the time. The “white house” loved the film’s portrayal of Black men so much so that it ordered more of such movies to be made and distributed all across white America.

The result was a mass disinformation and indoctrination act that painted Black men as sexual predators in American film and society.

Of course, the result was insidious. The propaganda rested neatly in the minds of white women: Black men wanted them and would have sex with anything (even the morbidly obese ones). Black men were (sexual) beasts needing white women for Jesus.

Which were all falsehoods. How white women could be portrayed as both angels and the sexiest beauties in American society still baffles the cooks in the media rooms of American propaganda.

What ensued in American society, however, as a result of the incessant onslaught on the character of Black men was far-reaching. Rap culture, which was a fine cultural invention in the African communities of the diaspora, became ensnared within the propaganda. The increasingly popular rap videos enabled the project of disinformation and indoctrination: Black men were filmed around literally naked women. The white male music institutions across the nation which violently controlled, produced and distributed rap music videos insisted on filming Black men rapping around more and more naked women. Soon the African American rappers themselves had no choice. They wanted more and more naked women in their music videos in order to get the white male institute, and the happy-consumerism of the white gaze, to buy into their music for the money. Double trouble.

What are the facts? In the twenty-first century, with the help of social media, it turns out that all the sex trafficking, all the pedophilia rings in the world and in the US, and all the prostitution joints of New York City, are run by white men. Even the so-called self-proclaimed elite white men who exclusively own sporting teams of games they’ve never been good at playing have been caught red-handed. The social media #MeToo Movement has made the number of white male sexual predators in the US alone look like the sand on the beach. They are so numerous every one has literally lost count.

However, the nature of American society, as it has been run by white men, prevails. The propaganda is not lost on them. So the act continues: To find naughty Black men who can be used as scapegoats to repaint, and reinforce the propaganda that Black men are still the sexual predators, not white men. Every other month or two, either Bill Cosby or R. Kelly appears in the US Mass Disinformation Media. Sometimes you find O.J. every other three months featured as some Sasquatch, appearing and disappearing at will, to torment white women in the American forests. The propaganda is unrelenting. Movies, documentaries and films are produced each year on these three Black men to remind white America that the Black man must be considered the face of sexual harassment.

Of course the facts do not bear out the disinformation act by the US Mass Indoctrination Media (CNN, FOX news, MSNBC, CNBC, New York Times, Washington Post, and the Root). The real face of the sexual predator, right under our feet, as numerous as the sand on the beach, may go un-mentioned. But we know, and we are amply aware, that it is the white man. The most prominent of whom is the president of the United States of America. The most prominent of whom is former president Bill Clinton. The most prominent of whom is Harvey Weinstein. The face of sexual harassment and sexual insanity has absolutely nothing to do with Black men in American society. Sexual insanity in American society is as old as the violence of chattel slavery. Look no further than to the European American man running wild, unchecked, in the Americas.