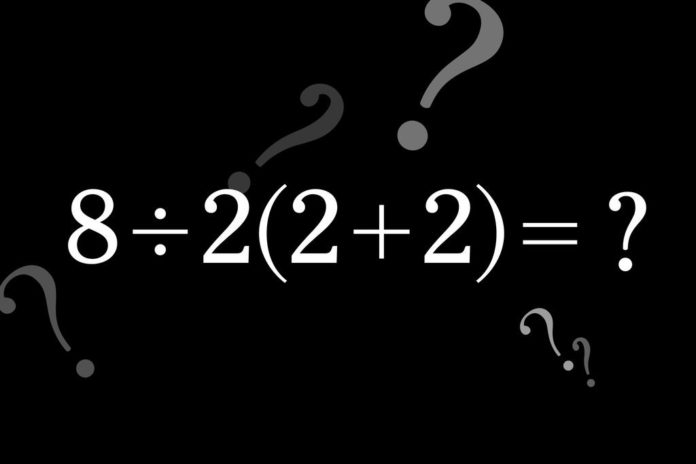 There’s an equation that gives many people pause:

What is the answer here?

Is there a correct answer?

Yes. Or perhaps… it depends.

However, BODMAS is not a universally accepted routine. In other countries, POMDAS (not PODMAS) is used, where multiplication comes first. The argument is with division and multiplication. It seems that in every country mathematicians or arithmeticians have accepted that addition and subtraction are simply not the same, and they seem to have largely accepted that addition must precede subtraction in any given routine. Not so with division and multiplication. Mathematicians are divided on whether these are the same or different.

The expression above, 8 ÷ 2(2 + 2), is readily rendered without trouble as, 8 ÷ 2 x 4. Which is where trouble begins. Depending on whether you proceed with the manipulation with the routine PODMAS or POMDAS, the result will reveal one’s country of mathematics education, or even one’s basic philosophy.

National or personal mathematical philosophies aside, the way the original expression is written is unclear, confusing, or easily misinterpreted. But of course, that is probably the point of the exercise. To test a philosophical idea, one must subject it to its margins of confusion. The expression 8 ÷ 2(2 + 2) tests the will of mathematical rule making, rule building and maintenance. It tests the will of an algorithm.

Philosophy and algorithms aside, can common sense prevail? Consider this other thought: One might easily re-write and interpret the equation 8 ÷ 2(2 + 2) easily as 8/2(2+2), which more intuitively can be imagined simply as:

…in which case the value is = 1, which is the same value one would expect using the POMDAS routine.

Common sense here agrees with the POMDAS routine. That is not to say that this result always occurs. In fact, it is the very failure of common sense in complex and complicated analysis that gave rise to the use and adoption of mathematical routines, the adoption of algorithms. To put this another way, common sense is not always correct!

So, what is the answer to the equation, you may ask? Some people might say 16 and others 1.

Is there a correct answer?

To get to the heart of this question, one must resolve the conundrums that arise: one must explore and critique the inherent philosophies at stake.

In other words, is to divide quantity by 2 the same as to multiply the same quantity by 0.5 Are these the same expression or different expressions, and if the latter, by how much do they differ?

Though in some cases, they may lead to the same result, they are different and much be treated as such.

Do you go with the rule or with your gut, if in fact the two provide different responses?

What is the strictest application of the rules of mathematical manipulation compared to what makes intuitive sense?

Is the law always right or do instances exist where intuition makes for the better guide?

If we are to judge how many of one hundred people choose 16 or 1, and our enjoyment of life dependent upon our making the correct prediction, which number would be the optimal answer? How many of those one hundred people are engineers or mathematics or people who have had formal training in answering these questions using the proper procedures? On the other hand, if we are to write an examination and answering this question correctly would give us prized admission to a noble intellectual society, it is not by coincidence that the same question might present a different ideal answer—or at least an additional challenge.

What this equation shows, more than whether one’s computational skills are apt, is that what matters more than any question or answer being inherently correct or incorrect are the context and the audience—the environment in which the puzzle is embedded and the ultimate recipient of the response.

What is the situation, who is listening, who is interested in the response, and what is at stake governs our thought process, our reasoning, and our evaluation. Needless to say, even mathematics in laden with bias. The simplest of equations can elucidate pervasive subjectivity even in those subjects most assumed to be pure and objective. Solving an equation is about knowing the rules or the formulas but also sorely important is knowing the people setting the questions and their hidden intentions.