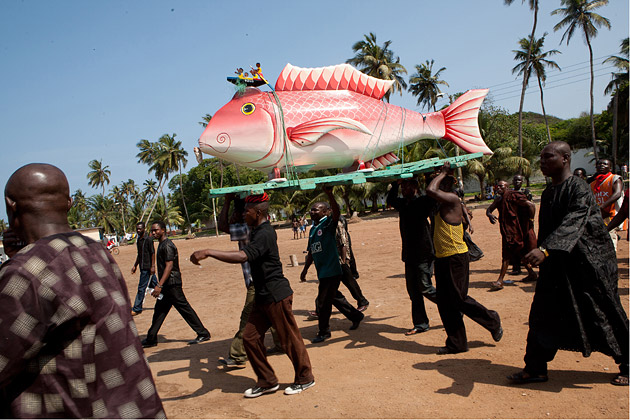 NTOABOMA—Some of you educated folks, especially those of you from abroad (Abrotsi) love to hate on what you call “Africa’s love for the dead.” Insinuating in equal measure—and this is actually your point—that those of us “left behind” in villages like Ntoaboma waste “way-too-much” money on the dead. You claim we shirk all responsibility towards the living and waste it on the dead.

But who told you the monies used for the funerals are actually spent (or as you say, wasted) on the dead? What’s that supposed to mean—do dead people eat the food at funerals?

Some of you say we buy expensive coffins, expensive drinks, food, this, that, this and then that, for funerals—money you claim should have been used to, for instance, pay a person’s way to better health than for their funeral. And so on your claims of “our waste of money on funerals” go from berating families, clans, ethnic groups, whole nations and even chastising an entire continent about what should have, and could have been done, with money.

First, you claim that a “proper” funeral is not important because when a person dies, they completely quench in all dimensions possible. Who told you? On the other hand, we claim that when a person dies they need a proper burial, a ceremony with friends and family, to ensure that person is sent off on the “proper” journey to the Ancestral world. You say this is bullshit. And we say your claim is also bullshit. So move on.

Second, you claim that using the money to better a person’s health in a superior hospital should supersede the priority of nicer coffins at funerals. You are not entirely incorrect here. There are certain situations where the sick are abandoned by family members who, in a u-turn, set up elaborate funerals for the deceased. But exactly how has doing one thing got to do with not doing the other? Can we not be fully responsible for our friends and family when they are alive and also be fully responsible for the dead?

Furthermore, as cynical as the ensuing point may sound you educated folks need to don a pragmatic perspective to comprehend some far reaching consequences of “priorities.” You misunderstand that people only die once, and that people don’t usually get sick once. If we are to contribute every last bit of our hard earned monies towards the sick, as we do towards funerals, what money and what resources will be left to bury the dead?

Third, you say we spend too much on coffins that these things only go to rot in the ground. Look, we understand these things—like coffins, like the clothes we put on the dead—have no significance whatsoever for you but you need to check the way you think. We believe that a pretty coffin decaying in the ground itself is symbolic. Even “gorgormi in tiafi” become butterflies. What I mean is that most of you will not go where a caterpillar thrives, but that thing soon delivers a beautiful butterfly. How? I am not sure. All we know is that we believe in the transformative powers of the cosmos. We give the dead a chance. You don’t, since you don’t believe they even exist. We do. So move on.

Last, in Ntoaboma, for instance, we don’t need a license from some state government or some federal jurisdiction to make coffins or bury our dead. We do not need loads of cash to do it. We actually don’t need to insure our own dying, our own funerals, nor are we forced to save ten thousand dollars for the funeral home money so that when we die we are not buried in unmarked graves. We have autonomy over our dead bodies. We can lay our dead anywhere we please for wake keeping. It is not like in Amerikkka where one needs a pathologist, a funeral director, and a coffin made by someone with an actual license that cost thousands of dollars. And yes we don’t have funeral homes on random street corners waiting like vultures to pounce on our dead bodies for fifteen thousand dollars of debt.

All this together makes funerals in Ntoaboma for example very inexpensive compared to these so-called beautiful civilizations you learn from. That is, no one has to go into debt if they don’t have to: You cut your coat according to your size.

All this and I haven’t even given you a lecture on the cultural and socio-political significance of funerals in Ntoaboma. I will spare you the instruction until you have saved enough money to pay for it. Or, until you are willing to go into credit card debt for it! If you understood African culture, I would only take a goat for it. But alas!

So next time you think of criticizing African culture, look somewhere else for a second. And think just a little bit. You will realize that it is only here in Africa, in Ntoaboma for instance, that we still have the right and the decency to respect our dead the way we know how and to come to peace with them the best way we can. How more human can you get?