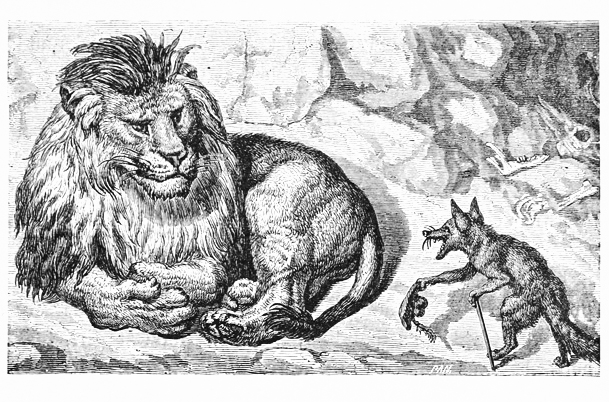 The fox goes about his own land eating everything he can find. When he can’t, he cultivates his land, endlessly eating and defecating every-and-anywhere in his house, on his land and into his rivers. To spur on his desire for even more feed, the fox builds up his lands with all sorts of industries, factories, to produce and to feed his endless appetite. The fox would kill anyone who challenged his endless appetite. The fox killed anyone who objected to his gluttony.

When resources became scarce in fox-land, the fox would kill and eat some of his own family members and the fox justified his cannibalism as a necessary act for his own survival. Any other fox that dared compete with him over the feed produced from the land, the fox eventually killed.

After many years, the fox finally kills his own land and his rivers – the land and the rivers in it could no longer support his gluttony. The fox wanders off in search of food.

The fox chances upon a strange land. In this strange land lived the lion. The lion has kept his house, his lands and his rivers clean, and the lion only ate what he needed. The fox was stupefied by the serenity of lion-land. The rivers, the mountains, the forests, the lakes, even the small streams were untouched; they were left to grow and share their radiance with lion-land. The fox was stupefied, not in admiration, but in jealousy.

The fox reasoned to the lion that this strange land must be primitive. This strange land, meaning the lion, must not understand what it takes to eat, to eat well and to consume without limit. In other words, the fox saw in lion-land the opportunity to embark on more and more of his gluttony. The fox did not see a beautiful lion-land he could learn from. Rather the fox saw resources in lion-land he could exploit for his own primitive consumption. More, the fox saw a weak lion who was incapable of exploiting lion-land to the fullest.

The fox decides to convince the lion to allow him to exploit the resources of lion-land. To do this, the fox brings with him trinkets from far, far, away in fox-land to present to the lion. The lion is initially impressed by the foxery (fox witchcraft), because he is unaware of the terrible disease of gluttony in fox-land. The lion is incapable of comprehending the true intent of the fox’s “goodwill” or supposed “good intentions.”

At first the lion imagined that the fox could become satisfied and settle down to sustainable behavior. But the fox never settled. More and more the lion became hungrier and hungrier, finding it more and more difficult to finding nourishment in lion-land. Lion-land was thrown into total chaos. The lion became increasingly aware that the fox was incapable of sobriety.

But the fox had also become aware that the lion had noticed fox-gluttony and was becoming increasingly worried about the destruction befalling lion-land. The fox built up his war machines to prepare for the day that the lion would threaten the insatiable gluttony of foxes; the fox has built up enough ammunition to prepare for the day the lion will rise against the unending consumption of foxes on lion-land.

That day has yet to come. Will the lion ever rise to protect his lands and waters from the fox?