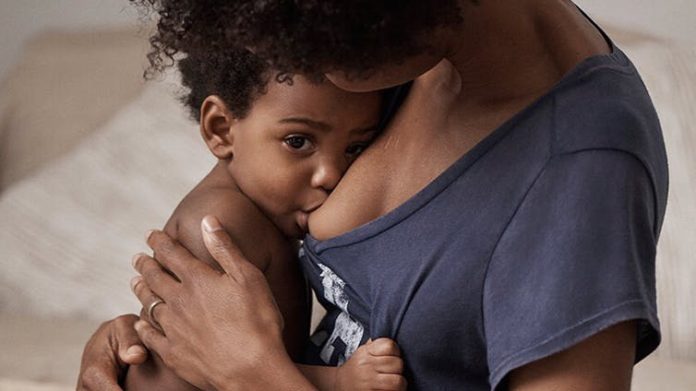 Breastfeeding was once a way of life, the only way of life for newborns to survive in the world. There was no such concoction as infant formula, no convoluted potion that swore, fingers-crossed, that it was on par with the original breast milk. All babies grew up on the breast. In traditional times and even now in many villages and cultures, in the event that a woman could not lactate or wasn’t present, another woman, a close relative, would assume her place in feeding the baby. There was no excuse for why breastfeeding was not administered to all babies.

Fast forward to these modern times where uncivilized methods prevail. Every year, new mothers contemplate the choice of breastfeeding or bottle feeding, as they would choose between paper or plastic at a market. The breast is only one option for babies.

Sometimes decisions are made based on the mother’s personal desires. If she wishes to preserve her ample bosom and shield it from her children who she perceives as potentially wearing it down, she might opt to implement feeding by bottle. For such women, the bottle is the ultimate method to prolong the downward pull of nature (at least until the implants settle in).

On the other hand, some mothers want to bond with their babies in an intimate way that only feeding allows, and for these mothers, breastfeeding is the way. Still other mothers do not lactate, no matter their intentions, and so must find alternate methods for feeding. Communities are less intact now than in the past, and therefore bottle feeding trumps breast feeding.

Then there are those troublesome cases, for instance of western women who outsource breast feeding to mothers who have no choice but to succumb to their coercion.

A cursory glance at history reveals how too many lazy and uncaring western white women especially have forced black and indigenous women of various cultures to breastfeed their babies, often under the threat of violence. When a mother has the capability of breastfeeding but chooses not to, and even more, forces another woman to do so, that is quite the epitome of barbarism.

How often, though, do women stop to ask themselves and others: why is bottle feeding so prominent today and not before? Though bottle feeding and using baby formula cocktails are now a widespread practice, this has not always been so. Why then is bottle feeding everywhere today? What are the meanings behind it?

These questions would be most effectively answered if all parties, babies included, could respond. Babies naturally want to know: who is so important to take my mother and the breast milk (at its perfect temperature) to which I am entitled away from me? If a baby could speak from birth, the baby would probably express feelings of anger and confusion: I didn’t ask to come into this world so that you could shove a replica nipple into my mouth! Where is the real thing, not the artificial imitation without taste and texture?

Most often the bottle serves the place of the missing mother who is either not around, often preoccupied with other tasks, or in extreme circumstances (as described above) lazy and uncaring. What takes mothers away from babies such that the evolution of the bottle is so necessary?

The first and obvious answer is that, of course, mothers who are away from their babies are most certainly at work. Their job(s) takes them away. They must go to the office. And why? Not because the office is truly more important than a newborn child. But rather capitalist societies value mothers as workers and breeders of workers. To the capitalist, the child is only a person to be groomed as a future worker. The mother’s only contribution is working herself to the bone, pausing momentarily to bring future workers into the world, and resuming working herself to the bone.

I hear the opposition clearly. Women must survive. No one is going to pay their bills and put food on their table so they can feed their baby if they do not work. They must work to survive. They must bottle feed to survive.

To that my, grandmother would ask: What is a bill? Why do I have to pay someone in order to live? Why does that make any sense?

My grandmother would shake her head at the obvious fact that the capitalist, owner, has programmed our contemporary consciousnesses such that bills are perceived as normal and women must work at jobs for eight or nine or ten hours each day to pay those bills. She never had to pay a tax or cent to keep her two feet on the ground or lay her head to rest. Her land was hers and there was no need to show up to some foreigner’s office to keep it.

Undoubtedly my grandmother would shake her head at the idea that she should spend her dear life, the best hours of her every day, to do who knows what for some foreigner capitalist, owner, and not herself. That she should need his money to exchange for her food.

The baby bottle and the baby formula cocktail are clever capitalist inventions that intend to convince mothers that their breast milk, their warmth and comfort, their body heat, their nutrients, and their antibodies are replaceable. My grandmother would never understand the concept of bottle feeding if I explained it to her a hundred times. For her, bottle feeding is not indicative of the development of any serious culture or civilization. But a substantial deviation from it.