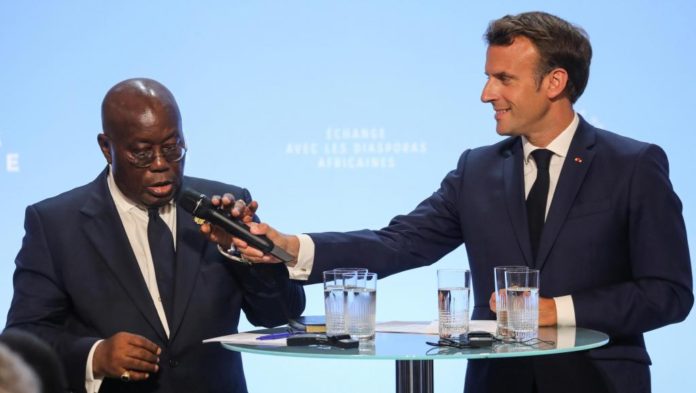 NTOABOMA—Take a cursory walk on any street in Ntoaboma. You encounter a four-year old. He plays around with his soccer-ball, and you decide to have a joke with his person. You ask the child, is that your ball? He replies, yes. Then you proceed and deny that it is his ball. That you want it back.

The first thing you’d hear from any child in Ntoaboma after that exchange is this: “Well, it is neither your ball.” You point to his cleats and you insist it belongs to his father, not to him. He will square with you and tell you that “It is neither your cleats! What’s your point?” You point to an airplane in sight barely making its way across the sky and you tell this child again that that plane belongs to you. Any child as old as four in Ntoaboma will let you know without debate that: “That is not your plane.” Thereafter, you can point to your own shoes, your own shirt, your own pants, and the four-year old in Ntoaboma has one and only one answer for you: “That is not yours!”

The French then would run through all of the above steps up to but not including the bombing campaign, from which it is deterred by Ghana’s nuclear deterrent (we would have had one). The answer, from these four-year old Ntoaboma children, who now lead the nation Ghana, would remain “Daabi.”

One could perhaps imagine now that some smart person within the French government contacts the US power structure and they would pipe up and say: “Based on the evidence before us, dictating our terms to Ghana doesn’t work; let’s try negotiating with Ghana in good faith as equals.” And then everybody else would slap their cheeks with their palms and say, “Wow! That’s brilliant! Why didn’t we think of that?”

But that smart person from France, because he’s inherently lazy and can barely be expected to hold his own nuts without suckling on Africa’s tits, would probably be fired that very day because, you see, France-European and American global hegemony is nonnegotiable. And so what happens instead is that the French and their American bulldogs act baffled, regroup and try again, making for quite an amusing spectacle.

But Ghana, because it is represented by such four-year old children from Ntoaboma, born to traditions and trained by it, the answer will remain resolute: “Daabi!” is “Daabi.” You see, the bomb, which they would have already secured, will be our ticket to freedom.

However, in Africa, and in particular Ghana today, matters of humanity aren’t so. They aren’t so simple, simply because we have made them so complicated. The biggest of our problems is the Metha.

The Metha remains a species that is both human and alien. He wears a crown everywhere he goes and he speaks either English or French (although not very well). He writes some English, mostly to pass his colonial missionary school exams and writes very little French. For his mother tongue—if he recognizes any Ghanaian language as such—he can neither speak well nor write well.

In fact, in most cases, the Metha is unaware that his mother tongue (which he has forgotten how to speak) is actually written. Where he’s aware that it is written, he’s unaware that it is also a subject of serious study. The Metha for this reason, as they have maintained since the twentieth century, is More Educated Than His Ancestors. Hence his name. By education, what the Metha actually means is that he has been abducted from his family and confined to a tiny classroom with too many other pupils for well over three decades, to be taught how to say “yes.”

Ghana is led by an elderly man who has been taught to forget the power of “Daabi” for over six decades. He is the Chief Metha. This man only knows how to say yes. “Yes,” is the answer he has to every and anything that the French put on his table. The leaders of Ghana are unaware that they are not even English, let alone French. They mop about in their tiny egos (symbolized by their protruding pot bellies) and can be expected to do nothing but nod with an emphatic “yes” to any and every thing that the laziest nation on Earth, France, can put on their desks!

So, this is how stuff works in Accra in a twenty-first century led by the Metha. The power structures (public and private) in Washington and Paris decide what they want us to do in Ghana. They communicate their wishes through our seat of government in Accra (official channels) or through well-funded NGOs and Think Tanks (unofficial channels). Or they do both.

The Metha consultants at Think Tanks traipse over to various policy centers directly involved with policy work in Ntoaboma and beyond. NGOs, too, send gas-guzzling V8 Toyota Land Cruisers newly imported from Japan to gallivant the vast terrain of Ntoaboma. All to carry out Washington or Paris’ orders. They run around gathering and curing tens of dysentery patients and a few hundred phantom malaria patients in return for selling our currency (The Eco) to the French and allowing Monsanto to force its low yield irreproducible crops onto unsuspecting village people (to make them starve and bankrupt).

Ghana has no leaders. It has a bunch of Methas masquerading as leaders. Else, if Ghana had any leaders, the power of “Daabi” would echo through every facet of our dealings with our colonial terrorists. But Alas!