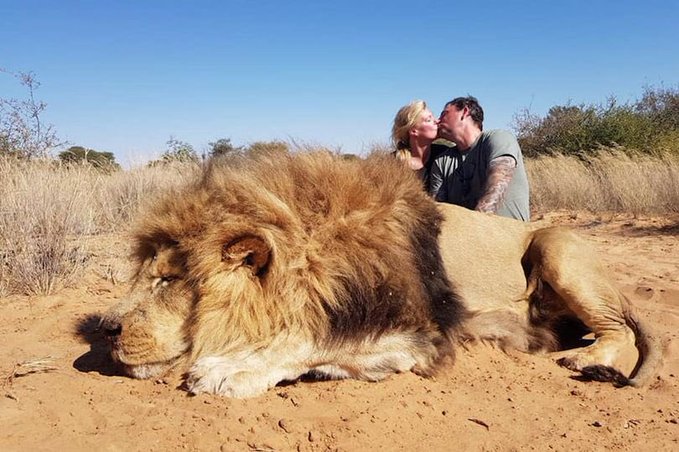 Fear. Why They Want to Escape Death.

And so when these “others,” this type of inferior-humans, or more succinctly when these in-humans manage to kill a lion, which has not threatened them, with a tool—either by themselves or with the help from other inhumans—they jubilate like triumphant idiots for expressing dominion over the very thing or being they feared. The inhumans are at once transformed into what they are not. They become faux-majestic inhumans.

Ever seen, or even read, about an inhuman kneeling over the body of a dead lion, which by the way he shot from a cowardly distance of 100 yards? He is like an idiot with his head gone. He decapitates the lion, and he decorates his bedroom wall with the head of the dead lion (forgetting the lion is no longer alive), so that when he fucks his cultivated-wife at night, with his rather limb phallus, he can look up from the bed into the very eyes of the majestic lion and derive some satisfaction from his inferiority—from his gross impotence. The inhuman derives faux-majesty out of looking into the dead eyes of things far superior them he.

Sex is key. Or the access to sex is key. More, the feeling of dominance in sex is key. The phallus transference of the inhuman’s feeling of faux-majesty from the dead-eyes of his superior is real. Sexually, the inhuman knows, and he understands that the lion is more majestic, not only in physical appearance but sexually even more attractive than he. The inhuman does not need his cultivated-wife to confirm his awkward but real feeling. He knows this just by looking at the lion.

For that matter, inhumans have cultivated an intense desire to decorate their bedroom walls with the heads of dead lions so they can satisfy themselves with the stench of their inferiority and insecurity; so that they can show their cultivated-wives who now urge them on that nothing should be admired more than the inhuman. By looking up into the eyes of a dead lion on the wall, the inhuman engages in the faux-transference of the majesty of the lion to himself, which he now forgets is no longer there.

Nothing majestic is actually transferred, but the inhuman needs the idea of majesty transferred to him so that he can feel secure about his insecurities. This seems barbaric enough. However, the fear of the lion which characterizes the psychological state of the inhuman does not end with the lion. If it did there would be no need to characterize him as inhuman. Except, it doesn’t end with lions. This psychological state of the inhuman is also employed and cultivated in the way the inhuman feels towards human beings. Hence his inhumanity.

And so how does the inhuman achieve this? Since the very idea of free human beings expose the insecurities of the inhuman, he must then enslave all the human beings that he is capable of cowardly enslaving with the same barbaric methods as shooting a lion from 100 yards. Worse, when the inhuman’s enslaved humans fall out of favor with him, for whatever barbaric reason, the inhuman is quick to enact utter violence in utter anger by decorating the tree right outside his bedroom window with the heads of dead humans so that when he fucks his cultivated-wife at night, or during the day, he can look up, straight through that window, right outside, and behold the sight of more majestic beings, the human beings he murdered.

Sex is key. You see? The phallus transference of faux-majesty is real here as well. Sexually, the human is more majestic, more potent, and more masculine than the inhuman. Inhumans feel threatened by this reality. More specifically, inhumans feel threatened by the mere existence of free human beings. For the very existence of free human beings is a constant reminder of the inadequacies that the inhuman suffers in bed. And so for that matter, inhumans have an innate, concertedly-cultivated need, to eradicate all free human beings before the free humans take over their wives.

The inhuman is most terrified by death. Humans, on the other hand, know and humans understand that lions don’t harm them; that other people don’t harm them; and that death doesn’t harm human beings. Humans know that when they cease from one activity to the next, it is a kind of death. Humans know that the rite de passages are deaths: childhood, girlhood, youth, old age. One must die in order to go on to the next stage. Humans understand that every transformation is a kind of death. Death is not terrifying, it is not terrible.

Still, for those who are aware, few of these humans actually admit that inhumans are truly restless in this regard. And that this restlessness is due entirely to a deeply psychological mishap among inhumans—an Insecurity Complex—that employs the fear and admiration of things far superior to inhumans. This psychological condition, this ailment, in inhumans, has the singular goal to destroy the lion, the next human being, the next tree, the next river, and then the planet as we know it.

And so to answer the question why inhumans want to escape death is simple: inhumans fear death. Worse, inhumans have a psychological defect, which has the real tendency to destroy the planet. Inhumans are weak. They cannot live without destroying what it is that they admire. Inhumans are like children, they cannot live with what it is that they admire until they have dropped it several times to break it. Inhumans are weak, they cannot accept their inadequacies. Like all fear, the inhuman fear of human beings is a sign of grotesque weakness.