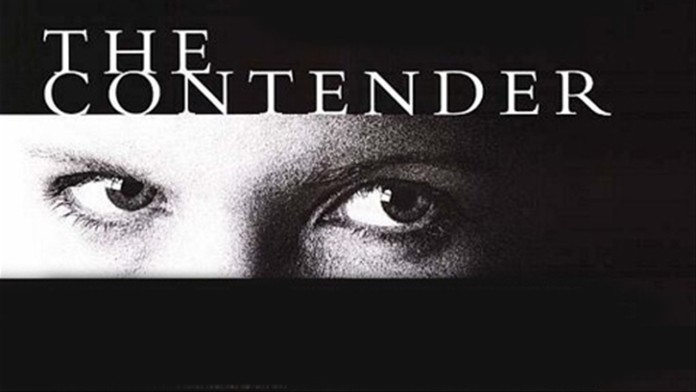 For too long, Hollywood has relied upon formulas to make movies, resulting in the same movie being replayed over and over. Only change the names of the characters, change the stars who play them, but overall, the plot, conflict, and resolution remain the same.

This inability to be creative has resulted in trite movies that now only really interest foreign audiences who haven’t yet been subjected to the repetitiveness of the Hollywood story form. Certainly once foreign audiences realize that all the movies are the same, those profits will tumble and Hollywood will have a real problem upon its hands.

The Contender is another film that inevitably suffers from falling back on a formula. It has an illness derived from its inability to display courage and actually promote the principles in which it claims to believe. It is unable to spring itself from the ideology of whiteness. Yet, if it did so, it would have led to a remarkable film and not the let down it turned out to be.

On the surface, The Contender appears to rip to shambles the Hollywood stereotype of the angelic white woman. Hollywood movies tend to paint white women as innocent, holy, and pure victims.

The Contender appears to deviate from this character trope with Laine Hanson (Joan Allen), a senator who vies to become the first female US vice president after the incumbent vice president died in office.

The leading male candidate Governor Jack Hathaway (William Petersen) and his staff scheme to find dirt on Senator Hanson, in order to discredit her candidacy. She is the clear favorite after Gov. Hathaway was unable to save a woman whose car plunged into the water near a boat during his fishing trip. The incident soured his candidacy. Voters would endlessly remember him as a man who let a woman die, which would leave a bitter taste on their palates.

Plus, America was ready for a woman in office, right? These are the factors that contributed to Senator Hanson’s slight advantage as the favorite.

But Gov. Hathaway’s crew stumble upon a juicy scandal–Senator Hanson was involved in a sex scandal while in college. She participated in group sex, a “gang-bang,” with multiple men. There is a leaked video, which brings the scandal to a graphic life. Sen. Hanson is suddenly thrust into the hot seat, having to answer questions before a committee prior to getting congressional confirmation.

Sen. Laine Hanson and the film question double standards with regard to gender. Rarely, if ever, do men have to account for their sexual escapades. An appetite for women–whether in multiples or in subordinate positions like interns–has never cost a man a spot at a higher rung on the political ladder.

Understanding this double standard, Sen. Hanson refuses to address the video and her sexual history before Congress. She tells the GOP Rep. Shelly Runyon (Gary Oldman): “It’s none of your business.” Her candidacy should be assessed based on her political record and not her personal history.

This would be a bold stance on women in politics, if in fact, Laine Hanson did not disclose her level of involvement in the rambunctious college affair. But the movie never is able to grow a backbone and stand on the grounds of which it professes.

Writer/director Rod Lurie does not allow Sen. Hanson to be a bold character, a symbol of a white woman’s freedom to be sexually exploratory on film. Instead, he pockets all risks and in the last segment of the film, hurriedly envelops Laine in cloak of innocence, as if to vehemently apologize for having a blonde white woman painted in such a vulgar light.

In a conversation with President Jackson Evans (Jeff Bridges), Sen. Hanson discloses that the whole scandal was a myth–an urban legend. She almost participated in the sorority initiation, going as far as seeing one man’s genitals, but she abruptly left the room. She was never naked. She was not the girl in the video.

What could have been a revolutionary narrative of a woman who attains a vice presidency position regardless of her sexual past is ruined completely when Lurie assures the audience that a woman in politics would never actually be the subject of a sex scandal. The film just falls back upon the character trope of the victimized, innocent blonde white woman.

The whole premise of the movie is that women should not have to discuss their sexual behaviors to run for political posts. In revealing that she was not involved in the sex scandal, Laine Hanson answers the question, implying that a woman does have to clarify her sexual history in politics. And more pressing, that a woman’s sexual history must be pristine or else ruin her reputation and her credibiility as a politician.

Sadly, Lurie does not allow women to break from this characterization and embody bold stereotype-defying roles. Lurie does not force us to accept a woman in politics with a controversial past. He rather reassures us that this woman’s past is not that of a sexually free adolescent, and implicitly speaking, other female politicians should likewise confirm their innocence, as Sen. Hanson did by the end of the film, or else undergo continued scrutiny.

Why does Lurie feel the need to absolve Sen. Hanson of this scandal?

Clearly, The Contender cannot divorce itself of the compulsion of the ideology of whiteness to paint white women in an innocent light.

Because of this Achilles heel, Hollywood films are incapable of developing human characters. In their place, we only see pure and innocent white women, valiant and immoral white men, and underdeveloped people of color.

The ideology of whiteness prevents whites from making a movie that is unpredictable, that is creative, that goes beyond trite notions to brainwash audiences, that has balls.

The Contender falls prey to this weakness and thus, in the end, fails to deliver on its promise of defying the gender double standard.