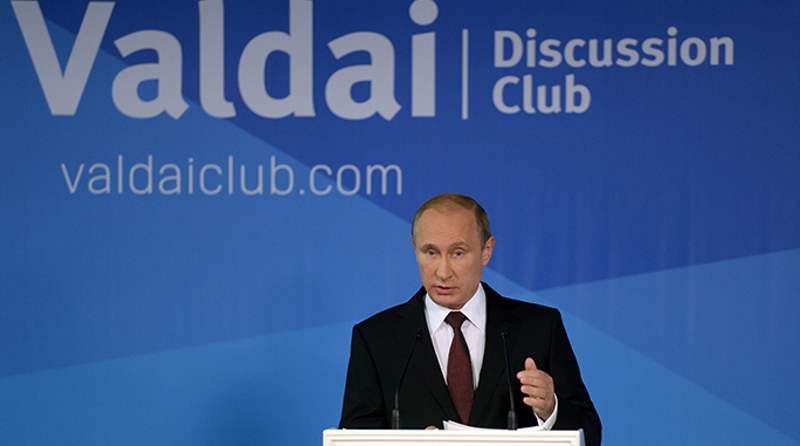 On Friday October 24, this year’s 11’Th annual Valdai conference in Russia was attended by 108 participants from more than 25 countries with the theme The World Order: New Rules or a Game without Rules. There Putin made a major policy speech about Russia’s role in the world and the now becoming more and more apparent reality of the decline of the US and the West and the chaos it might bring to the global security architecture.

We will now return to Putin’s speech at this year’s Valdai conference held in Sochi. The dramatic events signaling the fall of the Soviet Union propelled the United States to unrivaled global power for two decades. The expectation among rationalists and proponents of realpolitik in international politics that America would use the once in a life time chance dropped in her lap to shape an international system which was fair and just and answered to the interests of all countries did not pan out.

The US rather shaped the international system to her own needs trampling on the rights of other countries. Countries that did not agree with her diktats were deemed illegitimate and their governments subverted or destroyed. International laws were thrown out to the dogs if it did not suit western interests. The illegal invasion and destruction of Iraq comes to mind and the perversion of the UN resolution on
Libya to a policy of “humanitarian” destruction of Libya also comes to mind.

In his speech, Putin said that the changing of a world order as the lessons of history show is characterized by global wars, or confrontations, or at the very least by a chain of local conflicts containing in themselves the potential for global war. He said that the unipolar world that the Americans have sought to create following the Soviet collapse has not justified itself. The complex of international contradictions in global power dynamics is leading to further destabilization in the world. The American unipolar world order has led to what he calls “the apologetics of a dictatorship over peoples and nations” and that American behavior following the end of the cold war has been very irresponsible.

He said that the end of the cold war did not lead to a peace treaty or a series of guarantees to shape the international security architecture of the world to preserve peace. He is now calling for such a peace process to lay down rules of the game, rules of international law which will take into account the interests of all nations big or small. It is quite clear as Putin noted that the so-called ‘exceptional’ American nation is not capable of dealing with the global burden of leadership anymore. The so called ‘exceptional’ nation and the West are now engaged in trying to put out the flames of the crises they have themselves created in many parts of the world.

We have in mind, the rise of Al-Qaida and ISIS as examples. We can see this as a system of managed chaos that the West is creating to try to prop up their declining power and make themselves feel relevant as their economies continue to stagnate.

Putin goes on to mention the counter-productive effects of sanctions which is accelerating the move away from the dollar based international system. Sanctions are illegal under World Trade Organization (WTO) rules. But other Western nations seem not to conveniently notice that. He goes on to mention that the resistance to American hegemonic attempts is being made by countries that possess real sovereignty like Russia, China, India and Brazil and that these countries are now acting in concert in groups like BRICS to oppose hegemonic dominance by the US and its minions.

He states and I quote:

We need a new global consensus on responsible forces. We cannot talk about any local backroom deals, nor about the division of spheres of influence in the spirit of classical diplomacy, or of someone’s complete domination. I think we require a new edition of interdependence. No one needs to be afraid. On the contrary, it is a good tool to harmonize positions. This is especially true given the strengthening and growth of individual regions of the planet, which generates an objective demand for institutionalization of such poles to create powerful regional organizations and the development of rules for their interaction. The cooperation of these centers would seriously add stability to world security, politics and economics. But in order to establish such a dialogue, we must assume that all regional centers forming around them integration projects would have the same right to development, so that they complement each other and that no one tried to place artificial barriers between them for them to fight each other.

The concept of powerful regional organizations acting as civilizational and development nuclei for their members and as independent sources of power is a powerful wakeup call for Africa as well and the AU must charter her own narrative. Will Africa listen to that advice? Will the AU become a confederal community of federated African states reflecting the autonomous and historical structure of African societies that will create a space for the emergence of a powerful African power pole in world politics? The changing of global power which is currently happening presents Africa with a new historical chance to seize the momentum of history as the west loses power and declines. History is not always so kind.

He ends by saying the following words;

Remember the wonderful phrase:” What is allowed to Jupiter is not permitted to a bull. “We cannot agree with such formulations. Maybe the bull is not allowed, but I want to tell you that bear will not ask permission. Generally, it is considered the master of the Taiga. We not going (I know this for sure) to move somewhere to other climatic zones, where it uncomfortable. But he will never give the Taiga to anyone. I think it should be clear … Taiga is boundless, we only need to learn to master our territory and time and effort is needed, and a lot of resources. We do not need to climb anywhere, to command anyone, but to us, do not meddle in our affairs or pose as arbiters of the fate of the entire world. That’s all.

The final words that Mr. Putin formulates and expresses is apt for Africa. The African lion is master of the plains. He does not ask for permission from anyone to hunt or rule his vast domains. He is King of the Serengeti. We will not seek or ask for permission from the west or anyone else to forge our own path, to develop and build national and continental industrial and technological might. No one has any right to be the arbiter of our fates as a people. Any civilization or group of nations that stands in our path will be met with a fist of steel and the roar of the anger of the bulls of the Serengeti. The centuries of national and continental humiliation visited on us will no longer be tolerated.

That is all, and the West can stay backward with its history of appalling hypocrisy.