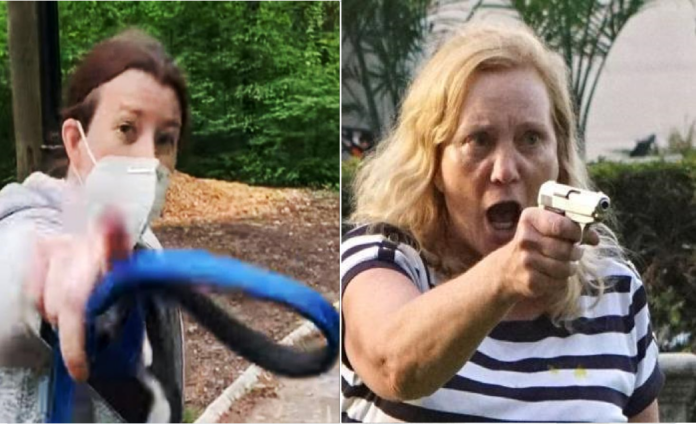 You have probably heard about Karen. If you haven’t (and even if you have), let me tell you.

Karen believes every public park bench, every public space, and every public sidewalk belongs to her. She believes Black people should worship the ground upon which she walks and make way with haste. No matter that she sees you coming, Karen is not moving one inch.

Karen’s dogs don’t wear leashes. She says that they are friendly and don’t bite. And you should just take her word for it. Why? Because she’s white and she says so. She feels she has never had to listen to you before, so why start now? Do what Karen says or else you’ll face the consequences of her white wrath.

Often her white wrath comes in the form of a manicured fingernail tapping rapidly on a touch screen. She dials the police like the numbers are an extension of her right hand. It’s that familiar.

Karen will call the white police on a Black person in an instant. To her, calling the police is a reflex—like yawning. Karen cares nothing about Black lives, no matter the airs she puts on. Don’t be fooled by appearances. Karen understands she needs that one Black friend to dissociate herself from the confederate flag bearing racists in her family. She has no qualms about putting you in the line of white supremacist fire.

Karen tells you to your face that white supremacism is bad, that she is against it. Karen would like you believe that she is not “in on” the oppression. That she is being oppressed too. That you both have the same common oppressor. That she, too, is fighting the white powers that be.

But the words that come out of her mouth don’t square with the checks in her account: her inheritance checks, her severance checks, her divorce settlement checks. From where you stand, from where anybody stands, Karen doesn’t look oppressed. Karen is definitely not oppressed.

Every time Karen so much as thinks about something she wants, it’s in her virtual cart and on its way—bought with one click. UPS, Fed Ex, and Amazon Prime trucks visit her residence daily. No matter the airs she puts on, Karen cares little about the environment.

Nothing makes Karen happier than to donate her old things to “needy people” to make room for her endless consumption. Little does she care that no people actually want her old things. That donation only feeds her vanity and ego.

Karen will tell you she is so accomplished which is a feat given that she is a woman. And all while she does so, she will never—not once—mention her husband, her father, her brothers, her uncles, her grandfathers, and all the men in her life and all the times in her life (even now) they prop her up. Karen would like you to think of all of them as her enemy, our enemy, as white patriarchy. But if you believe this, gullible as you are, you fail to ask one simple question. “Karen, why do you always have white patriarchy over for dinner?”

Karen keeps all the slices of the pie in her fridge with no intentions to share—anything to secure her advantage.

Karen does not think much about Black lives. Karen is always thinking about when is the best time to schedule that couple’s canoe trip with her husband, just the two of them with exactly one life vest.

Karen will tell you she has what she has because she is hardworking, harder working than you. It is best to not listen to Karen if you don’t want to hear her sing the only tune that she knows—that of her own praises.

If you get beyond Karen’s empty words and actually evaluate her actions, you’ll see that she acts the same as her former selves, whether it’s the year 2005 or 1805.