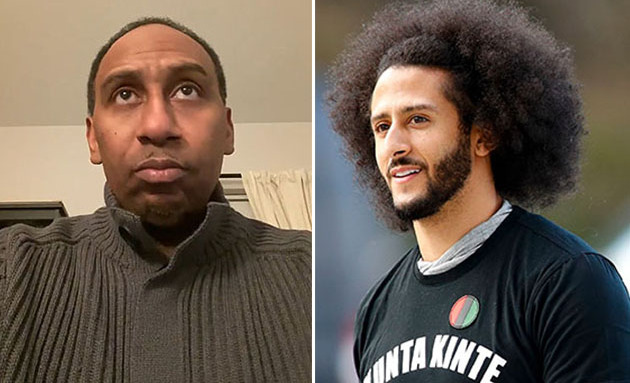 Here’s a conversation I had with a beloved brother of mine about how the NFL has completely white-balled Colin Kaepernick (CK), denying CK actual employment. Stephen A. Smith (SAS) is a ESPN commentator who can often be found chastizing African American athletes every chance he gets on national television for absolutely no athletic reasons. SAS’ rise to the top of the Dominant American Society, to chastize professional Black athletes has come at a great expense: He played collegiate basketball and he has a mouth as big and as loud as anybody’s.

Here’s the conversation I had with Brother KN about the CK situation in the USA.

Narmer: According to Stephen A. Smith, my step brother from New York and Philly: No value is as sacred or adult as shutting up when there’s money to be made in America. Stephen A. Smith epitomizes every American capitalist/lawmakers’ dream of an immigrant Black man in the United States of America. Just do anything for money. To hell with rights; to hell with values; to hell with basic human dignity! And when the shit hits the fan, you the immigrant can always run back to your native country, which you claim to love so much! This is why #ADOS and #FBA movements have gathered momentum in the last couple of years alone. It is exactly because of commentators like Stephen A. Smith. His nonsense has become legendary!

Narmer: KN (I didn’t even realize that you had the same initials as Kwame Nkrumah). Well, what can I say. Point taken. Suffice it however that Kap’s workout was not the stunt. The NFL arranged workout without having an agreement in place with Kap, Kap’s people and the NFL teams, was the stunt. You see, you are looking at the thing (Kpeshie) from Labadi. I am looking at it from Teshie!

Brother KN: The NFL is not a team. The teams are who give contracts (agreements) to players. The NFL exercises oversight responsibility which is why they organized the workout. They contacted CK’s team about the workout at least 5days before the workout and CK’s team agreed to the terms only for CK’s team to unilaterally change their mind at the last minute on Saturday without even formally informing the NFL…..CK pushed his luck on this one but was quite unprofessional to do so.

Narmer: KN. That is simply not true. That is simply the propaganda that the NFL is sending out. The Waiver that the NFL sent out to CK’s team was bogus. Look it up. It required CK to give up all rights to seek legal address later. The NFL required CK to sign this Waiver even before the NFL Teams actually knew there was going to be a workout. The whole thing was a stunt. Of course CK team would nto let CK sign the Waiver. They tried negotiating to have the NFL use a standard NFL Team Waiver but the NFL executives refused even on the last day! CK really wanted to do the workout, but without signing the Waiver the NFL won’t let it happen. What to do? Go workout at another venue so the world can see what CK is capable of doing. You see the thing?

Brother KN: NA, unfortunately you aren’t been fair to the NFL here. CK has already been paid by the NFL for the waiver. His team wanted a new waiver with enhanced clauses. The NFL suggested to CK’s team that that was a separate issue from the trial out which is true. The trial out could certainly have gone on at the location both of them agreed on separately as they work out the details of the new requested waiver so let’s be fair here. CK’s team attempted a hostage situation at the last minute which was unprofessional. NFL has released the communications they were having with CK’s team which shows that even at 9am on Saturday morning, CK’s team were still onboard to show up at the agreed venue. The waiver was a separate issue.

Narmer: KN. I would really love to see the communications from the NFL because they are literally blowing my mind. Any way you can direct me to where you found that info?

Narmer: Oh, come on, NK. You know the NFL is clearly nidificating in their seats. Per their own statement, on Wednesday, there was disagreement about the Waiver. So for the NFL to assume the workout was still going to happen without addressing the Waiver was, in my opinion, once again, symptomatic of the lucripetous nature of the NFL Plantation Owners.

More, the NFL Owners are truly limaceous. Their lubricity and lasciviousness knows no bounds. Why the need for a Waiver that pundits have clearly shown is not standard? They claim that they sent CK “a standard liability waiver based on the waiver used by National Invitational Camp at all NFL Combines and by NFL clubs when trying out free agent players.”

I know there’re a lot of NFL media giants trying hard to spin the narrative, which is why CK knew that even without an agreement on the Waiver, he needed to shoot a workout to show the world. The Waiver was, and continues to be the point of the whole stunt. The lubricitous NFL Plantation owners want CK to sign away his rights to seek redress in court forever? As if nothing at all has happened between to two parties? Come on! Who would sign that?

The issue remains, the NFL wants an Obedient Black man, not an Activist Black man who speaks truth to power about Black issues. The NFL Plantation heads have allowed all others (including forcing men to wear PINK, “pink oh, my brother) to speak to big issues. Now that a Black man is speaking to a National Issue that affects Black people he should be butt-broken if he must be allowed a job? Don’t forget that the NFL is private and they have certain laws that allow them to essentially operate as a MONOPOLY. Hence either they employ CK or, we will have that law repealed so other Billionaires can fund a new league! Their choice massa.