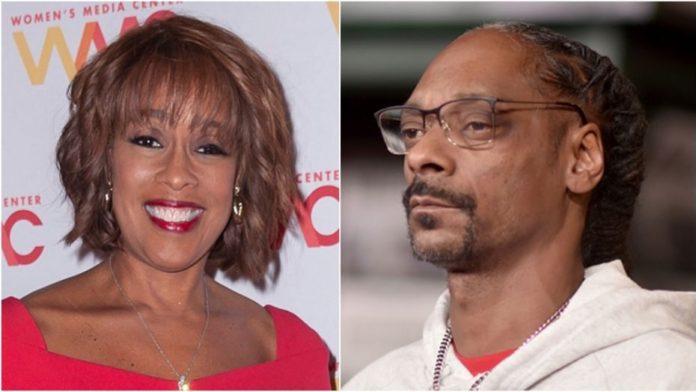 The white supremacist media, Viacom, has finally buttbroken Snoop Dogg for all to see and be terrified.Here’s part of Snoop’s apology to Gayle King, which he claimed his mother asked him to give:

“Two wrongs don’t make no right. When you’re wrong, you gotta fix it,” he said in his latest Instagram video, which included a subtitled transcription to make sure no one missed his message amid the glitchy audio. “So with that being said, Gayle King, I publicly tore you down by coming at you in a derogatory manner based off of emotions, me being angry at questions that you asked. Um, (I) overreacted. Should have handled it way different from that. I was raised way better than that. So I would like to apologize to you publicly for the language that I used and calling you out of your name and just being disrespectful.”

Snoop Dogg continued, “I didn’t mean for it to be like that. I was just expressing myself for a friend that wasn’t here to defend himself” — meaning Kobe Bryant. “A lot of people look up to me and they love me and they appreciate me, so I want to let them know that anytime you mess up, it’s okay to fix it. It’s okay to man up and say that you’re wrong. I apologize. Hopefully we can sit and talk — privately. Have a good day.”

Snoop Dogg rose vehemently against the Mammy, Gayle King, who had riled up much of the African American community by tarnishing the memory and legacy of one of the greatest basketball players the world has ever known in an interview with Lisa Leslie (Kobe’s close friend).

Here’s part of that interview: “It’s been said that his legacy is complicated … Is it complicated for you, as a woman, as a WNBA player?” King asked. Leslie said it was not and said in all her dealings with Bryant she never knew him to be “the kind of person that would … do something to violate a woman or be aggressive in that way.”

In that interview, Gayle implied (in like manner as white supremacist journalists at the Clinton Nazi Network (CNN), the Nazi York Slimes (NYT), and the Puffington Posts (WP), do of Black men), that the case, of a white woman accusing a Black man like Kobe Bryant of rape, did not go to trial because the woman declined to testify; that Bryant later apologized to the woman and paid an undisclosed amount in a civil settlement.

That rendition is plain incorrect. It is outright wrong. Even, it is a fabrication of the facts. The actual fact is that Bryant was charged with sexual assault and false imprisonment 17 years ago after a white woman working at a Colorado hotel he visited accused him of rape. The criminal case was dismissed by the prosecutors (for insufficient evidence) and in a separate civil suite by the same white woman, Kobe and his lawyers decided to cut the white woman, a serial prostitute who suffered from schizophrenia, a check, because Kobe Bryant had grown sympathetic to the white woman’s long-term sickness.

In Gayle’s interview, she engaged in Mammyism, which is to say that she proceeded to paint the white Colorado prostitute as a victim and painted Kobe Bryant as a villain who had raped her. Disregarding the sheer historiography in the US of white women who have thrown out dubious charges against Black men for centuries, in order to have them arrested, charged, molested, raped, imprisoned and sodomized, Gayle’s act was in the same taste of white supremacism. It was distasteful.

In his initial post, in retort to Gayle, Snoop Dogg said, “You ain’t come after f—ing Harvey Weinstein asking them dumb-ass questions. I get sick of y’all. I wanna call you one. Is it okay if I call her one? Funky dog-head b—-! How dare you try to tarnish my motherf—ing homeboy’s reputation, punk motherf—er? Respect the family and back off, b—-, before we come get you!”

(Hence a mammy, also spelled mammie, is a U.S. stereotype, especially in the South, for a Black woman who worked in a white family and nursed the white children whose mother was either too lazy to feed them or refused to feed them. The mammy figure is rooted in the history of slavery in the United States in which Black women were coerced to breastfeed white babies.)

To say that Gayle is a Mammy implies that she not only works for a white family (corporation) but she is more interested in the well-being and continuity of that family than her own. Mammyism therefore is a type of self-destruction imposed on a people by their terrorists.

Kobe passed away recently in a helicopter accident in which his eldest daughter was also killed. Seven others died in that crash. Gayle maligned the character of Kobe Bryant by bringing up a summarily dismissed 2003 charge brought against him by a white woman from Colorado who suffered from schizophrenia.

Buttbreaking is the method of physically (and violently) abusing Alpha Males in the African American community to send the message to all and sundry, that white supremacism is real, and no one is going to fight against it. (The Mass Incarceration drive in the USA is a project to lock up alpha males in the Black communities).

When Snoop says his “mother” asked him to make the apology, he invokes an age-old African American verbiage in Oral tradition. In the African American communities, when one needs to do something that is out of character in the interest of the others, when one is not agreeable to the request, one invokes “the mother” as the reason behind the action they wished they would not take. “My mother,” is always the excuse to make things “right,” since in the African American tradition, as in the old African communities from which their Ancestors came, the Mother is an important, vital figure in the imagination of family mores, taboos, and respect.

By invoking the authority of his mother, Snoop is not necessarily saying that his mum asked him to apologize. He is engaging a complex oral tradition, and he is saying that he has been forced against his will to do what he would otherwise not do. (It still doesn’t imply that the apology wasn’t sincere). In other words, Snoop’s mother didn’t ask him to apologize to Gayle King.

But, Viacom did! Since this detail cannot sit well with African Americans, the only way to make Snoop’s apology to Gayle agreeable to the vast masses of Black people in the US is to invoke “his mother.” This act is both a rhetorical contradiction and an agreeable excuse.

What actually happened is that the white male executives at Viacom, the real sexual predators in America (the real but veiled villains of the #MeToo Movement) about whom Gayle’s interview was supposed to shroud and veil with the “blackface” of Kobe Bryant’s dismissed accusations (which is the main goal of #MeToo), actually held down Snoop’s contract and forced him to acquiesce to their demands in a buttbreaking ritual, or else risk being excommunicated from Viacom.

Snoop is buttbroken. Which goes to show that when you are dependent on white supremacist institutions for your own sustenance, it is impossible to rise against them. They can buttbreak anyone who is dependent on them. Viacom, or the US Government has yet to ask Susan Rice (the idiot who was once an Omaba National Security Advisor and who summarily threatened Snoop Dogg with her long-standing relationship with a violent government agency, at the National Security Service of the United States) to apologize to Snoop Dogg. Viacom has certainly not asked Gayle King either to apologize to Black America.

But, buttbreaking alpha males in the African American community is an old white machination to force whole communities of Black people to live in fear for their lives and to kowtow to the demands of violent white terrorism. Snoop Dogg got his butt-breaking yesterday. The question is whether the large masses of African Americans today will shrink away from the call to expose the pervasive and insidious barbarism of white supremacism in the US today or whether they would rise tall, irrespective of the consequences, and demand that the Birth-of-a-Nation project to paint the faces of the villains of the #MeToo movement as Black will no longer work?

Only time will tell.