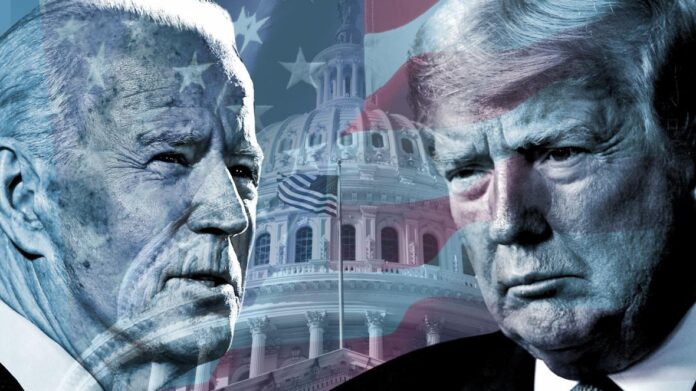 Remind Me: Who Is It Gonna Be? Jim Crow Joe or KKK Trump?

It has become all too obvious in American politics that African Americans are coming to the realization that, in every election year, all they are asked to do is to pick which flavor of Euro-American white terrorism they would prefer for themselves. The key word here is “prefer,” since the very idea of “preferring” one Chief Terrorist of Black people over another, as President of the United States of America, remains the dictate of America’s white oligarchs, and not, as the world would like to believe, an exercise in democracy.

And so remind me: Why should I vote for Jim Crow Joe (the Bigot) Biden, and his catamite, the mass incarceration queen from California, Kamala (the race-hustler) Harris?

Allow for just a moment to show you that I do not mince words when I say that all our phrasings of Euro-American terrorism are exactly the various faces of the same die. Here’s Joe Biden, in 2020 (not 1986), proposing yet more funding for the Mass Incarceration of Black People Industrial Complex. Don’t take my word for it, I will quote, ditto, the musings of white people to make my point even more damning: what, but to use the horse’s own words against him!

“On Wednesday, presumptive Democratic nominee Joe Biden, in a striking rejection of the growing movement [i.e. Black Lives Matter] demanding better use of public dollars, reminded Americans that there is also plenty of money for [the white] police coming from the federal government when he called for an additional $300 million in federal incentives “to reinvigorate community [white] policing in our country.”

“I do not support defunding [our white] police,” Biden wrote in an op-ed for USA Today. “The better answer is to give [our white] police departments the resources they need to implement meaningful reforms [to put more Black people in jail], and to condition other federal dollars on completing those reforms [of putting more Black people in jail]. … Every single police department [which is, all white police departments] should have the money they need to institute real reforms [for the mass incarceration of Black people].” (The Intercept. The emphasis, [], on interpretation are all mine).

So Jim Crow Joe is the man I must prefer over the Orange Man, and KKK member, President Donald Trump? Again pay attention to the phrasing, “prefer.” Since we already know where Joe stands in relation to President Trump—Jim Crow Joe or KKK Member Trump is a distinction without a difference—why don’t we look a little deeper into why Kim Crow Joe has chosen Kamala Harris to be his queen? Here, again, let me quote, ditto, the musings of other white people’s report to make my point even more damning than I have already shown.

“Ms. Harris [Kamala Harris] has proudly labeled herself both a “top cop” and a “progressive prosecutor.” In her 2009 book, “Smart on Crime,” she wrote that “if we take a show of hands of those who would like to see more [white] police officers on the street, [more of the violent slave raiders for the Euro-American mass incarceration industrial complex], mine would shoot up,” adding that “virtually all [white] law-abiding citizens feel safer when they see [white] officers walking a beat.” (The New York Times. Again, the emphasis, [], on interpretation are all mine).

This is the sum of Jim Crow Joe’s Indian American queen. Top cop, indeed. And so there we have it: On one of the most significant issues of interest to the Black communities of America, the clear demand among the calls for justice and accountability: defund the police, via the #BlackLivesMatter Movement, Jim Crow Joe (the Bigot) Biden and her Indian American queen, Kamala (the race-hustler) Harris, have decided that enough’s enough. Jim Crow Joe would rather double-down on injustice! He has promised $300 million in federal dollars to the cops, and he has enlisted his new queen, Kamala Harris, to make it happen.

Remind me: Why must I vote for Biden and his catamite, Kameleon Harris? Why?

No answer. However, one could perhaps imagine now that some smart person within the Euro-American terrorism power structure would pipe up and say: “Based on the evidence before us, we are only, really, picking on Joe Biden and Kamala Harris, and that we must still vote since voting is a privilege afforded us through the blood and sweat of our forebears. And that… that America is not perfect. No place is, and therefore we must vote.”

And so a gullible person might slap him/herself on the cheeks with their palms and say, “Wow! That’s true! Why didn’t we think of that?” No. not really! To show you that Anti-Blackness is as prevalent in the Democrat Party as it is in the Republican Twin, let me again bring the humble reader yet another quote, ditto, another instance of the musings of other white people’s report to make my point even more damning than I have already shown.

“As the force of the defund police movement has taken some by surprise, Biden has hardly been the only politician to seek to defend the status quo. Even his one-time rival, Sen. Bernie Sanders, indicated in a recent interview that he objected [to] calls to defund the [white] police. “I think we want to redefine what [the white] police departments do, give them the support they need to make their jobs [of incarcerating Black people] better defined,” said Sanders. “So I do believe that we need well-trained, well-educated, and well-paid [white, racist, slave-raiding] professionals in police departments.” (The Intercept. Yet again the emphasis, [], on interpretation are all mine).

And there you have it. This election we, as Black people in America, are presented with the fallacy of the false choice: Jim Crow Joe or KKK Trump? Who would it be? The logically valid option here is self-preservation: Neither Trump nor Joe. Even if that involves abstaining. This is the only true expression of our self-assertive personhoods.