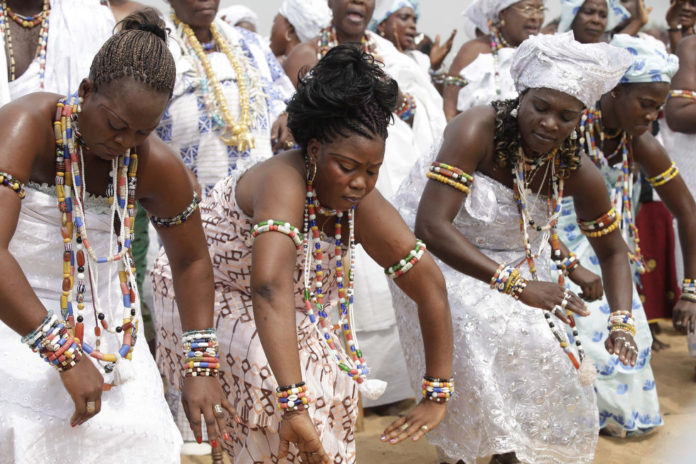 The intellectual foundations of Vodun abound in its expositions and rationalizations of our natural world. However, the striking feature of the religion throughout historical time shines brightest when one examines its resilience, its resolve and its tenacity in the face of dreadful odds. From the pristine temples of Vodun in Yorubaland, to the famous temples in Eweland to Akanland in West Africa, to the temples of Candomble in Brazil, to the Vodun temples of Haiti, to the Kromanti temples of Jamaica and Suriname, and to the Vodun sanctuaries of New Orleans, the shared multiplicity, diversity and uniformity of the religion is evidence of its organically evolving genius throughout time and space.

Unique to Vodun is the unforgettable, unforgivable and unparalleled pain: the form, length and nature of the tragedy of the Trans-Atlantic Slave Trade. No practitioners of a religion have suffered more horrors, more genocide and more tribulations together than the people of Vodun in the tired space of the last four centuries of colonial terrorism.

Even more disturbing than the constant travail of the lived experiences of the people is the persistent ideological mutilation, the “cleansing” missionary attack on the theological and intellectual core of the religion itself. First, by Arabized Islamists of the African North, then by Judeo-Christian sects of Europe, the goal has been threefold: (1) to brand Vodun people as below human, (2) to relegate Vodun knowledge forms to the doldrums of primitivism and finally (3) to wipe out all memory of Vodun by any means necessary.

To this point the genius of Vodun is distinctive in that the shared doctrines and experiences, no matter how tenuous and unnerving—and however minuscule their triumph against these appalling odds—speak truth to their unquenchable will to power. Vodun’s very survival is testament of this genius. From the first invasions of Islamic terrorists to the subsequent blitzkriegs by Judeo-Christian terrorists from Europe, the people of Vodun and their religious ideas have evolved and adapted in ways unimaginable.

The tenacity of the people is shown across West Africa and much of the American diaspora, where Vodun has provided the core for a super-human strength necessary for transcending the consummate stupidity and complete insanity of racism, slavery and colonialism. Throughout these four hundred years of the terrorism of slave raiders and slave plantation capitalists, funded and trained by colonialists, the people of Vodun have arisen, albeit scathed—but remained spiritually stronger—from the midst of oppression in one country after the other, and from one battle after the next.

For some of these reasons, to understand where the anti-Vodun movement obtains its drive to sustain its genocidal verve, one only need look at the color of the trade that stoked the fire of slavery and the religious inclinations of the capitalists who abused fellow human beings much more intellectually advanced than they. Even here, it was easy to think that the believers in “primitive accumulation” would actually become satiated by their sheer greed. But no! They engaged the services of blasphemous traitors in the twentieth century especially to conveniently shift blame to the very victims of their carnage.

Vodun’s genius hence stems from the mere fact that it persisted against the torrent of existential threats, both from without and within, and it managed to propagate its invigorating spirituality among African peoples scattered across the globe in equal measure. Further, it survived an idea that was even more debilitating—the ideology of anti-Vodunism itself, which still rears its ugly head in almost all parts of colonial Africa. Specifically, anti-Vodunism as an ideology is the strong derogatory sentiment against Vodun as if those who practice it are the proverbial devils and their children committed to the indoctrinated hell.

In most of the barbaric world, from the torch-carrying Islamic Arabs to the Christian sword-wielding westerners and through much of the ignorant terrain of the remaining abyss of stupidity, anti-Vodunism is a popular refrain for those who wish to scorn and demean doctrines other than their own, and more specifically it is a pastime for those who wish only to express their disgust for people they partly hate and partly despise—Blacks!

Anti-Vodunism then is invariably rooted in much of the doctrines of the nineteenth and twentieth century European racial sciences. Indeed, the unique tragedies of the past four centuries speak volumes about the effects that the “sciences” produced by uninformed men, pseudo-intellectuals, in one part of the world can have on the ideas and human dignity of men in another part of the world. Although within their rotten rumblings about Blackness, and about Africa, Vodun still managed to rise up from the ashes of the Trans-Atlantic Slave Trade; and it has also emerged from the unrelenting colonial, neocolonial and imperialist terrorism of today to occupy the apex of an unmatched human spiritual expression.

The people of Vodun, although they now straddle worlds across the vast terrain of colonial Africa and the diaspora, still share in the lived experiences of their historical memory of Vodun from its West African source and its triumphant all-encompassing intellectual culture. Incidentally, all its peoples are part of a resolute and unshakable spiritual identity.

This shared identity transverses four key aspects of the fabric of the ancient religion that is Vodun: (1) the culture—in the sense that ideals of Vodun such as the day-to-day customs, taboos, rituals and mores permeate almost all aspects of the lives of the people, (2) the geography—in the sense that Vodun people can still be found mainly in historically defined parts of the world and finally (3) the unmistakable hew of the race—in so far as Vodun is historically and entirely an African religion that is still only largely embraced by those who don the rich hew of Blackness.

Obviously, on the one hand, it is this history of Africa’s Blackness about Vodun that continues to unsettle the rest of the ignorant and particularly stupid world of anti-Vodunism. On the other hand,   it is this Blackness that shines brightest in the unparalleled spiritual expression of Vodun. Those who rise against Vodun could not be expected to be bright enough to recognize its unique history, its energizing spirituality, its freedom seeking radar and its unforgettable gifts to the spiritualties of almost every other religion that has sprung outwards from its African historical context.

Anti-Vodunism, in this inimitable sense, is distinguishable; it draws much from the fountain of racism—an ideology rooted in the psyche of the stupid, the conscience of the foolish and the monomania of the ignorant. In fact, in this light, according to anti-Vodunists, the race of Africans can be inextricably linked with Vodun, while the same race can be excised from the forgery of the historical contexts of both Islam and Christianity (and Judaism). This way, the evangelical and civilizing role of Islam and Christianity for instance make their way back to Africa, newly rooted in an anti-Vodunism without exception. Which all goes to show that the confusion of the hatred is lost in its utter craziness.

In order to appreciate this nonsense of the anti-Vodunist, take for instance a cursory look at any referral to Vodun within western paradigms of thought. One cannot come across a single line in a newspaper, book or TV show without pejorative terms like “black market,” “black magic,” “paganism,” “animist,” and “Satanism.” Along this line of thinking, even the memories of our own Ancestors are relegated to a purgatory beyond redemption. Again, according to the racist and the anti-Vodunist, Vodun is anything but the axiomatic good, hence all its historical memory, its culture and its spiritualism must be summarily discarded.

The historical divergence of this association of Africans to Vodun while writing them out from the early foundations of Islam and Christianity, and many other religions, are probably lost to several of the Napoleonic book-burning, library-burning, and priest-killing terrorists, militants, academics and colonialists, but the cultural and spiritual influences of Vodun from its most ancient parts on the “fashionable” religions of today are not lost on those who care to dig a little deeper.

Nevertheless, the goal of anti-Vodunists has always been clear—brand Vodun as evil, and by this very branding, the African, the Black man, by association and definition becomes an evil that needs correction; he becomes a disease that needs a cure, a pagan who needs salvation, a gentile who can only be accepted into the presence of God through the blood of Jesus, a Goyim whose claim to God must come through the “chosen” hands of the Jew, and consequently a savage without a sense of agency about his own land and his own resources and hence must be directed as to their very use. Of course the goal for these pseudo-religious doctrines was clear from the outset. It was set in the final analysis of imperialism. And in this imperialism the unhappy, the unruly, the unrounded and the uncouth sought to amass unnecessary wealth by any means.

Clearly, race will continue to play a defining role in how anti-Vodunist sentiments are propagated around the world. It is from this frightening valley of racism that one cannot humanely overlook the shared suffering and tribulation of the people of Vodun in the past four centuries alone. It is also the proper context from which one can carefully examine the resilience and genius of a religion that has struggled and fought against barbaric odds; a religion that has outsmarted the contempt of much of the anti-Black, anti-African and racist world.

Like the concurrent ideologies of whiteness and like the emasculating Judeo-Christian doctrines of the exceptionalism of only the “relaxed hair and the white faces,”anti-Vodunism too is rooted in an ignorant illogical hatred. To this point, there is little to be said about the inchoate minds of the anti-Vodunist, but more to be written, examined and espoused about the sheer will with which the people of Vodun have genuinely, immaculately and intellectually navigated the colonial terrains of terrorism throughout the past four centuries.

Surely the luster of Vodun today derives from its character and its exultant will. But its genius derives much from its intellectual capacity—the ability of the theology to escape, survive and triumph over the carnage unleashed upon it. The sum total of the spiritual and intellectual might of Vodun rests within this safe bosom of the freedom of the will. More, this genius of Vodun will continue to shine even brighter as Africa, in particular, begins the hard work of deracinating the last claws of colonial, neoliberal, racial and pseudo-religious terrorism. The will of Vodun will persist and it will continue to carry its people across time and space.