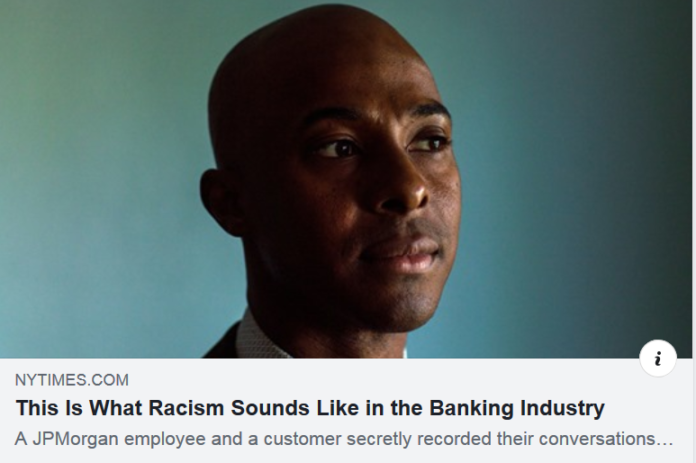 BROOKLYN, USA – There is a prevailing lie about the economics of Racism. That racism is costly for any given society. Don’t accept such vague generalizations. The point alludes to the largely accepted idea that there’s a human cost to racism. But just because there’s a “human cost” to something doesn’t mean all human beings suffer. Some actually gain. Let’s look at it. What’s the human cost?

It’s like a Recession. That is the cost is not a moral one alone. In other words the appeal against racism or for racism is not an appeal for or against moralism – to moral reason – per se. Discussions and arguments about moral values shroud the practice of racial abuse. From now on leave out moralism, and the insidiousness and pervasiveness of racism in Euro-American societies, by Caucasians against people of African descent, will begin to make complete sense.

Racism is inherently an economic problem: a transfer of wealth from victims to racists! Hence, not everyone suffers the so-called “human cost.” Some people actually gain – they make tons of wealth during a recession, during periods of (intense) racism. A recession on the whole is bad, but it depends exactly to whom you are referring. Racism is immoral and it deprives Blacks economic success, it loots and robs Blacks of their wealth and it transfers this wealth into the hands of the Reds.

Racism hence is like a recession. Only for Blacks! Only it acts incessantly in Euro-American societies. So by human cost, what the Red academics (western academia) want is to appeal to your moral values while they conceal the financial issue of (violent) wealth transfer, which is at stake. The idea of a “human cost” without explicitly naming the type of human cost that it is, is a method in Red-people-paralogics in which one obfuscates meaning in order to redirect action and consequences away from the perpetrators of violence.

Racism, in socioeconomics, is therefore a constantly acting Recession for Blacks, in which wealth is continually transferred – often times, violently – from Black labor, into Red hands (Caucasians).

This, and only this meaning, is the only human and financial cost of racism in any given society: i.e. Blacks suffer socioeconomic and financial losses! Now, if Blacks suffer, who benefits? When Blacks lose money, who gains the attendant wealth? The Reds! Racism, hence, has a cost, a Black financial cost. Next time when you read such vague lines in economics or sociology from a western school, such as “racism has a human cost,” the correct meaning should not evade you any longer.

Now, let’s address the real beneficiaries of racism and more racism. The Reds. W. E. B. Du Bois concluded a long time ago that the large masses of Red people (Obroni Korkor, or Ayevu Djin) are of average intelligence. That is, they care nothing about Black people if it involves self-assertive manhood.

In other words, Caucasian Americans understand that racism, and more racism, transfers more and more wealth from Blacks towards Red personal and business accounts. And they could care less about Blacks – a people, they partly hate and partly despise. In other words, to hate and to despise people is called prejudice. To transfer wealth from people you hate and despise, often violently, into your own hands is called Racism.

Racism involves looting, colonialism, imperialism, robbery, armed robbery, terrorism, murder, genocide, chattel slavery and piracy! Racism can be based on prejudice, however, prejudice is not racism. Prejudice is only the foundation upon which Racism is built, maintained, preserved and further developed. This is why a Red person might claim that he has no prejudice while he continually reaps and builds upon the wealth transferred to him from Black sweat and blood, from generation to generation. Racism is the ultimate socioeconomic terrorism of Blacks (of Africa), by Caucasians (or Euro-America), it is not just a moral issue (prejudice). It’s little about moralism and overwhelmingly about the incessant, unwavering, economic terrorism of Blacks by the Reds.