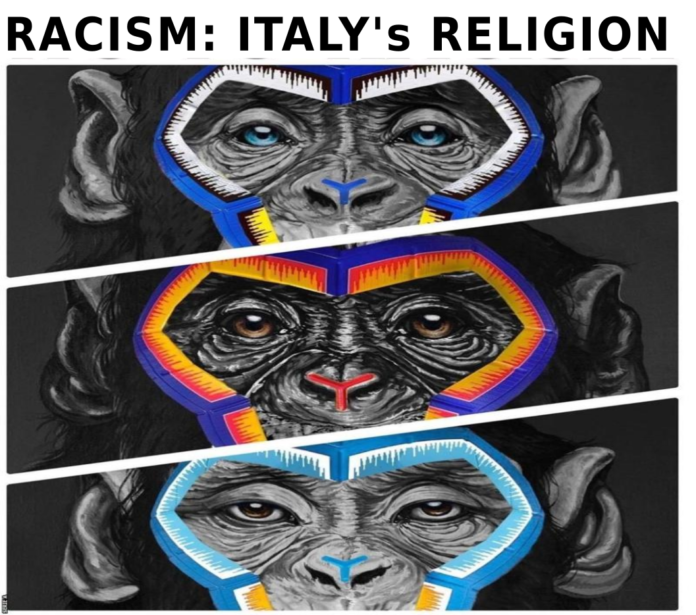 MEMPHIS, TN – AC Milan claims that it “strongly disagrees” with and was not consulted about the use of monkeys in artwork for a Serie A anti-racism campaign.

The ‘No To Racism’ posters show three monkeys with painted faces.

It comes less than three weeks after clubs pledged to combat Italian football’s “serious problem” of racism through art.

And since it was another Italian man, Michelangelo, who painted Jesus the Christ for the first time as a Caucasian man, falsifying the more than a millennium’s history and ancestry of the Black man, Jesus the Christ, it was no surprise that the Italians would come up with another jumentous ridiculosity as a result of their sheer inhumanity towards people of African descent.

Italy’s political stand on Africa and Africans will remain one of envy and jealousy. For all it claims to have been throughout history is not without African aid via the first Etruscans, and through the Kemetian colonization of Crete and Greece. And for all Italy claims to be today, an European nation, the Moors did so much breeding in Italy that many Italians are truly not Caucasian or are they acceptable as Africans either!

Furthermore, to appreciate racism in Italy, one needs to understand that Italy’s “Daddy Issues” with the warrior Moors from Africa, which remains Italy’s identity crisis came to a head when it was summarily defeated and sent back to Europe when it attempted to colonize Ethiopia in 1896 (The Battle of Adwa).

So art is the only way Italy can express its “Daddy Issues” and the only way it can approach its strange attitude towards Africa and Africans, who they partly hate and partly despise. Although even in art, Italy’s understanding and performance of art is what we call in Africa, childish. Italy still has a long way to go in the development of art.

For now, Italy seems to appreciate that art is powerful. Even for the healing it needs from its Daddy Issues. “Art can be powerful, but we strongly disagree with the use of monkeys as images in the fight against racism,” said an AC Milan statement.

Only we know that the Italians who penned that AC Milan statement did it chuckling gleefully! There’s a certain sadistic attitude of Italy’s verve and desire to be racist! Deep down Italy’s attempt to get over its Daddy Issues has resulted in more hate: Racism. Racism is truly an European problem, but in Italy it is a ful-fledged daddy-religious practice.

One thing is certain: Italy will again descend from their caves (not from their childish art alone) and attempt to loot African resources and African art as it once tried to do in Ethiopia. One thing is certain: Italy will be defeated again, and perhaps this time, Africa might take the fight back to Italy where the terror can be brought to bear also on Italian soil. Perhaps that day, Africa will settle Italy’s Daddy Issues once and for all, i.e., African men will once again, like the Moors before them, change and restore the entire bloodline of Italy!